2021 hasn’t gotten off to the same electric start that 2020 did for your boy here in the UFC Gambling world, but that wont stop us from continuing to put out money making picks.

We have a solid PPV card coming at you tonight all starting at 5:30 CT on ESPN/ESPN+.

Kamaru Usman will be defending his Welterweight crown against his former Sanford MMA teammate Gilbert Burns. A classic teammate vs teammate title fight that has become quite an interesting angle in the UFC’s storied history. With fights between teammates turning into rivalries like Dillashaw/Garbrandt and Evans/Jones. Unfortunately, this doesn’t really seem like one of those fights, although there are plenty of parallels. Rashad Evans being a mentor to Kamaru Usman and pulling the same move of leaving his long-time gym- although in Evans case, he left JacksonWink MMA because his teammate Jon Jones was getting a tittle fight. In this case the actual champ left his gym, defintely not the common move for the champ leave his home camp to go another gym, but in this case Usman went to Colorado to train with top cornerman Trevor Wittman with Burns staying in Florida at SanfordMMA.

It will be really interesting to see these two square off. You have to imagine that with these two being teammates for so long, they should have a pretty good idea of each other’s strengths and weaknesses and even more than that, I’m sure they know who is the better fighter. A very interesting dynamic no doubt.

This definitely isn’t one of the UFC’s best PPV cards, especially in the shadow of next months UFC 259 that sports three title fights. But us loyal fans will shell out the dough to see this title fight. While we are at it, I’ll try to sell you on the rest of the card.

Here are the extended fight odds: 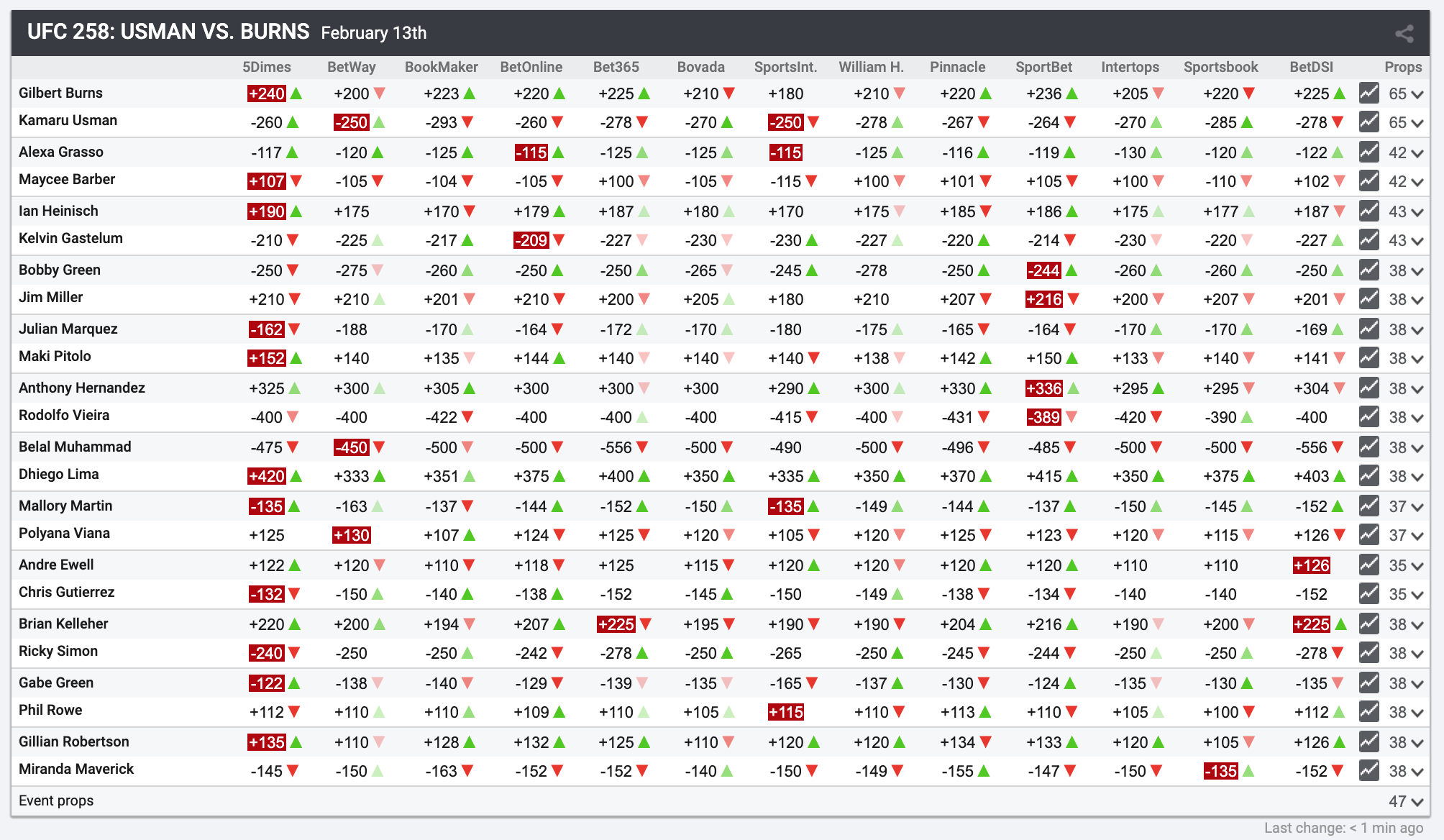 *A little programming note, the Bobby Green / Jim Miller fight was called off after a scary situation where Bobby Green fainted backstage after weigh-ins, more on that later.

PICK: Miranda Maverick (-145) – In a fight between two up and coming Flyweight’s this is a tough pick. Styles make fights here and we know what Gillian Robertson will do and that is- try to take her opponent down.  If this fight stays on the feet, it should be Maverick all day. This is going to come down to Miranda Maverick’s takedown defense, I’m betting on the fact that she will have enough to win this fight by decision.

PICK: Philip Rowe (+112)- This is another tough fight to pick, the UFC seems to be pumping up Gabe Green. Writing puff pieces about him on UFC.com about how much he has overcome to get to this point. His opponent Rowe hasn’t fought since August of 2019 and Green himself hasn’t fought since last May, it is a whacky match-up. I don’t want to overthink this though. Rowe has a sizable advantage in height and reach. The 6’3″ Rowe towers over his opponent Green who stands only 5’8″. Rowe also as a seven and a half inch reach advantage. I’m going to ride with the raw stats and go with the underdog in this one.

PICK: Andre Ewell (+122) – This is a bet on Ewell’s eight-inch reach advantage. Andre Ewell was booked to fight last week against Cody Stammen, a true grappler. Now he gets the draw of Chris Gutierrez a top striker. Not the best luck in terms of fight prep. Ewell has the skills and length to hang tough in this match-up. Expect a close decision win.

PICK: Mallory Martin (-135) – Two fighters who have very similar styles. This is a bet on Martin still showing room to improve. I think Martin will do enough to hang on for a decision victory in this one.

PICK: Belal Muhammad (-475) – Lima hasn’t fought since October of 2019, Muhammad has only ever lost to top talent. Lima doesn’t fit that bill. Muhammad is a justifiable heavy favorite, he’ll ride this to a decision victory.

PICK: Rodlofo Vieira (-400) – Poor Anthony Hernandez, he only gets fed to top talent. He lasted only 39 seconds in his most recent fight against Kevin Holland back in May and now he has to take on the undefeated BJJ wizard Rodlofo Vieira. I think this will be another submission victory for Vieira as he shows off that World Champion prowess. Hernandez can try to finish Vieira on the feet but if this fight goes to the ground, it’s game over for Hernandez.

PICK: Julian Marquez (-162) – This is a tough matchup to predict because of Marquez’s long absence. He hasn’t fought since July 2018, he has way more tools as a fighter but there is always a threat that he comes back a shell of his former self. I’m going to ride with Marquez here, let’s hope its a formidable comeback.

PICK: Brian Kelleher (+220)- So this fight moved from the Early Prelim card all the way up to the PPV card because of Bobby Green having to drop last minute after collapsing backstage after weighing in. Hopefully that was just a weight cut issue and nothing more major. Green was the last to weigh-in, he made weight and then fainted backstage. That is all of the information that is known as of right now. It’s a big time bummer because Bobby Green was in high spirits at the UFC 258 press conference, hopefully these two will be able to make up this fight in the future and more importantly that Bobby Green is in good health. Simon and Kelleher get to capitalize on the misfortune of Bobby Green and Jim Miller by taking their PPV spot. This should be an absolute scrap, two extremely dynamic fighters. These two usually fight at 135, instead this fight will be contested up at 145 giving Simon a little bit of an advantage given his bigger frame. Simon is the better wrestler but Kelleher has finishing ability standing as well as on the ground. This is basically a bet on if you think Kelleher will get a finish before Simon can control 2 of 3 rounds with his wrestling. I like “Boom Boom” in this one as the underdog.

PICK: Ian Heinisch (+190)- Sometimes in fighting there can be talk about who needs a fight more. I usually like to stay away from that kind of narrative when making picks because it can make you ride with a lesser fighter because of the storyline. Kelvin Gastelum needs this win and that is exactly why I am riding with his opponent Ian Heinisch to get that win. Gastelum is coming off of 3 straight losses. Albeit against some of the top talent that 185 has to offer, including a 5 round war and match of the year candidate against the Champ, Israel Adesanya. Gastelum needs this win and Heinisch is just the type of dude to capitalize on this kind of predicament. I love Gastelum but I just feel like it will be tough. Heinisch should be able to make this ugly and grind Gastelum to an upset victory.

PICK: Maycee Barber (+107) – “The Future” makes her long awaited return! Even coming off of a loss and a torn ACL, Maycee Barber draws her toughest opponent on paper to date. Luckily for her, Alexa Grasso wants to stand and that is perfect for Barber. Grasso is a decision machine and that’s a plus for Barber, I predict a dominant return for Maycee.

PICK: Kamaru Usman (-260) – These guys are teammates. Burns knows good and well how much better Usman is than him. That’s why this fight has taken so long to make. Burns used to fight at 155, he will not be able to match-up with Usman’s power. He’s by far the strongest and most powerful dude at 170, he is plenty stronger than many dudes at 185 even, so I really think this will be another Usman wrestling clinic.

Should be a great night of fights, make sure to follow along on Twitter @SONTChicago for all things Combat and Chicago Sports.