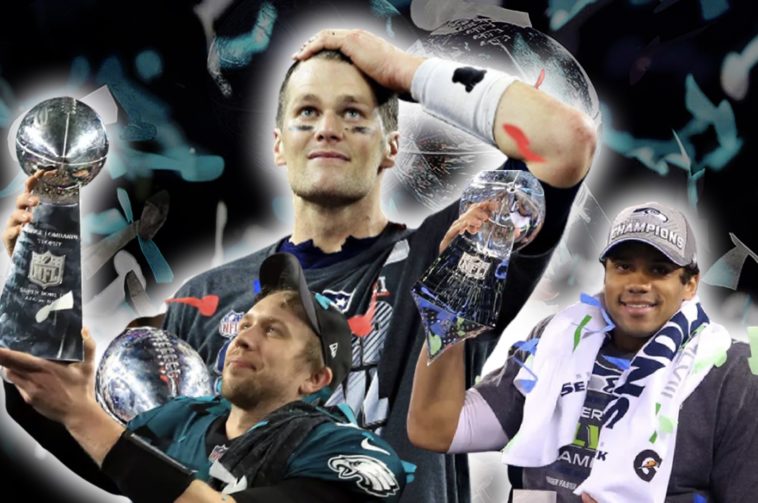 Let’s start with the reality here, I am not that old. I am currently 27 which means I have still watched my fair share of Super Bowl Sundays, but don’t expect any of my Top 5 Super Bowls to be in the 1980s. Another side note, I am born and raised in Seattle… So the Patriots interception finish will not be number one on my list, there is definitely Seahawks bias behind that one.

Oddly enough, we will have A LOT of Tom Brady and the New England Patriots on this list. Yes, the ‘oddly’ was sarcasm. This year is his 10th Super Bowl in my 20 years of watching NFL football so I’ve watched 50% of Super Bowls with him in it. Somehow that 43 year old GOAT is in the Super Bowl again in 2021. Tom Brady bolted New England and spent the year with the Tampa Bay Buccaneers and of course led them to the Super Bowl in his first year. But here comes ‘Baby GOAT’ Patrick Mahomes and shockingly the odds AREN’T favored in Tom’s way. The Chiefs are favored over the Buccaneers in Super Bowl 55. What is interesting is that Brady’s winning record in Super Bowl’s hasn’t reflected as such for spread bettors, as he’s covered in just four of his six victories to this point (and all three losses came as a favorite). Anyone who has believed solely in Tom’s winning ability, however, has come out on top rather comfortably — though that “believing” would’ve required foreseeing a major upset in Brady’s first appearance back in 2002.

We’ll see if Tom Brady can make an upset happen and get his 7th ring…. It sounds fake to type out or to read, but that is really what he is going for this weekend… With that said, let’s get into the top 5 Super Bowls of my lifetime.

Start to finish the Seahawks defense absolutely dominated Peyton Manning and the favored Broncos’ historic offense on Super Bowl XLVIII. A blowout of all sorts… Now, for most this would land on one of the most boring Super Bowls ever, so I just threw it as honorable mention as a lifelong Seahawks fan.

“ITS SNAPPED OVER THE HEAD OF PEYTON MANNING” #Seahawks win the Super Bowl ?? https://t.co/jLdmTwGCOL pic.twitter.com/sXTWfbk31g

The beginning of the Greatest Show on Turf culminated in Kurt Warner winning a Super Bowl MVP by throwing for more than 400 yards. It looked like the Titans would score and tie things up, but Kevin Dyson was stopped, almost frozen in time with his hand reaching out to the end zone. The world was one yard short from Jeff Fisher possibly winning a Super Bowl. That final play is one of the first moments I ever had of a Super Bowl.

This game had everything. There was controversy coming in (Deflategate had just begun) and it was a battle of the two best teams in football. The defending champion Seahawks came out gunning, the Patriots responded and took over the game and then Russell Wilson and Seattle tried to steal it back with one of the wildest catches by Jermaine Kearse you will ever see. Malcolm Butler promptly took it right back with arguably the greatest defensive play in Super Bowl history.

This one hurt badly, as a Seahawks fan, I hate it so much, but the reality is, this was one of the best to watch for everyone involved in football.

Today in sports history February 1st, 2015.. don’t remind me ? the #Seahawks lost to the Patriots in the Super Bowl. Should we have just run the damn ball? @PodThat

Does the Patriots’ comeback from 28-3 make it the greatest Super Bowl ever? It was certainly the greatest comeback in Super Bowl history, but you can argue at least one half of this game was not “exciting,” per se. On the other hand, it was absolutely stunning to see the Patriots get curb-stomped by the Falcons in the first half…. This comeback was something else though… Can’t really beat it. I will never forget watching this at a random New York bar with my brother George, and seeing everyone get deflated by the fact that Brady came back… and did it again…

The #Soundfx from this game is incredible.

?? NOT SAFE FOR FALCONS FANS ??pic.twitter.com/Gi54V7kGtf

There was the PHILLY SPECIAL. The Philly Special with backup QB Nick Foles… To beat Tom Brady and the Patriots…. Just what?! Yeah it was as wild as it sounds.

Less than 3 years after the Philly Special Doug Pederson is fired.

Despite what happened at the end of this year. I’ll never forget the Eagles somehow eating the Patriots. Nick Foles beating Tom Brady… and yes, Doug Pederson beating Bill Belichickpic.twitter.com/Dm0Fuywnbh

The undefeated Patriots strolled into this game as massive favorites, until the Giants provided the formula to beat Tom Brady: pressure with a four-man front. There are more technically proficient and athletic catch-and-throws than The Helmet Catch, but there aren’t many that are more miraculous and on a bigger stage. It was a mini-Hail Mary with Eli Manning scrambling to avoid pressure followed by David Tyree pinning the ball to his helmet as he fell to the ground. The stuff of legends.