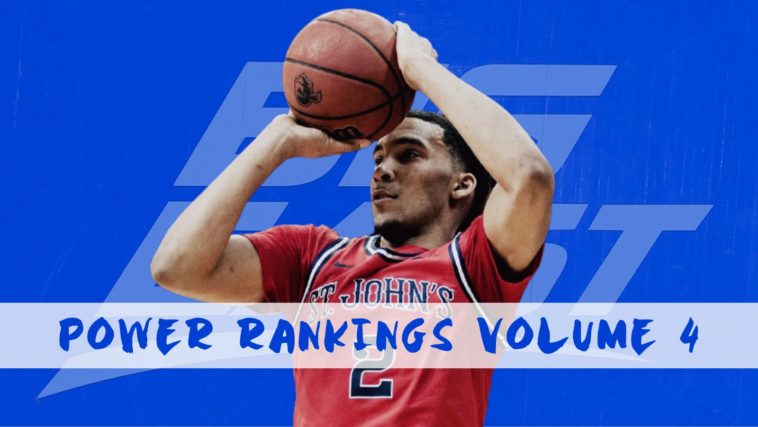 This past week in the Big East saw Villanova and Creighton further separate themselves from the rest of the conference. Villanova did so convincingly. Creighton? Not so much, but two conference road wins are nothing to scoff at. Elsewhere, St. John’s continues to quietly creep up our rankings and owns the conference’s second-longest win streak. Marquette has basically fallen off a cliff, and Georgetown returned from their extended layoff by pulling off an upset in a dimly-lit gym devoid of fans.

The calendar has turned to February, and a fair amount of teams have a whole heck of a lot of games to make up in what’s sure to be an incredible last full month of the regular season. Buckle up for a mad and unorthodox dash to the finish line.

We talked about how good Villanova looked last week coming off the long pause and they follow that up with a thorough beatdown of Seton Hall on the road. It’s not even so much the opponent, although The Hall did nearly beat Nova just 11 days before, it was how Villanova did it. They shot 45% from 3 and made the Pirates pay for every single turnover and mistake. The game was never as close as the 8-point final scoreline showed. Jeremiah Robinson-Earl was excellent with 23 points and Collin Gillespie continues his great run with 11 points and 11 assists. At this point it is hard to argue that Villanova is not a Top 3 team in the country.

The Wildcats will finish their road trip with a game at St. John’s on Wednesday before returning home to play Xavier Sunday.

The Jays started hot, cooled way off, then came storming back en route to a 16-point comeback victory in Newark much thanks to a 29-point explosion from previously-struggling Mitch Ballock. The Creighton faithful had been waiting for Mitch to seek out shots for seemingly the entire season, and he and Marcus Zegarowski came up huge in the game’s closing moments to keep the Bluejays in the running for at least a share of what could be their second consecutive Big East regular season crown.

Creighton was riding high after one of the more iconic comebacks in program history and shot uncharacteristically well from the charity stripe at DePaul to escape Chicago with an ugly win, but a win nonetheless. Marcus Zegarowski continues to string strong performances together & was named the Conference’s POW (officially) for the second time in his career as a result. Death, taxes, Jays giving up a career day to a random opposing player as Ray Salnave exploded for a career high that he eclipsed in the first half. It wasn’t pretty in the slightest, but CU is now 5-1 on the road in conference play.

The Bluejays look to continue to make ‘Nova at least slightly nervous with winnable games against Georgetown at home before aiming to avenge a home loss to Marquette in Milwaukee.

Tyrese Martin (20) & RJ Cole (11) shouldered the offensive load as UConn handily beat Butler in Storrs. The backcourt pair were the only two Huskies to score in double-figures, but you don’t need a whole lot of offense when the opposing team barely clears the half-century mark. UConn shot exactly 50% from the field & 50% from distance in a ‘dominating’ dozen-point victory. Scoring still continues to be a concern for the Huskies without James Bouknight but like Coach Hurley made clear – when they defend at a high level they can win.

UConn returns to the court after ten days on Saturday as they host Seton Hall.

The Musketeers have the second-fewest conference losses, quite possibly by virtue of being shut down, but that’s good enough for a #4 ranking this week as the Big East continues to eat itself alive. Their first action in 20 days was a convincing win in which the Musketeers jumped out to a sizable halftime lead and kept Butler at arm’s length the remainder of the way. There didn’t appear to be a ton of rust as X shot a hair over 50% from the field & was 10-of-20 from deep. Paul Scruggs led all scorers with 24 and pulled down 7 boards and got help from fellow guards Adam Kunkel (15) and Nate Johnson (14) along the way.

They continue their road quest Wednesday night at DePaul before a Sunday matinee at Villanova.

Missed opportunities is the best way to describe the week for Seton Hall. The Pirates got the two best teams in the conference at home this week and came away with nothing. For a coach and a program that prides themselves on defense, The Hall did not play much this past week, especially at the 3-point line. Kevin Willard’s team is now 100th in defensive efficiency according to KenPom. As for the game, the Pirates put up a Willard-era best 54 points in the first half against Creighton midweek only to blow a 16-point second half lead to lose a heartbreaker. The Jays hit 17(!!) 3s in the game after struggling mightily to do much offensively over their past few games.

Short memory because a win over a Villanova team that you should have beaten just 11 days prior. The Hall came out flat and Villanova torched them. The score shows an 8-point margin but it really wasn’t that close. 8 first half turnovers and yet again getting torched from the 3-point line was a killer, Nova shot 10-22 from 3. Things are at an interesting point for Seton Hall, they don’t really have a quality win and they honestly just need to win games at this point in the season. Opportunity yet again this week with a Wednesday trip to Providence before a weekend game at UConn.

Don’t look now, but the Johnnies have won four in a row, good for sole possession of second-longest current win streak in the conference. They put on an offensive clinic in the first half at DePaul & four guys ended up with at least 15 points. Posh Alexander continues to play wise beyond his years and is an absolute thorn in opposing guards sides. His late steal and score against DJ Carton helped ice the game against Marquette. The Red Storm Barely hung on to win in Milwaukee after nearly blowing a 15-point halftime lead, but road wins in the Big East are commendable nonetheless. Julian Champagnie scored 38 on the week with a workman-like 16 and 6 in Chicago before scoring 15 of his 22 in the first half in Milwaukee. He’s only scored less than 15 points in two conference games all year, one of which was a win while in the other he pulled down 12 rebounds. The Champagnie-brothers conference POY dream is still alive!

St. John’s really has to prove their mettle when they host Villanova tomorrow night in what could be 40 minutes of hell for Mike Anderson’s bunch. The Johnnies then play at Providence on Saturday.

The Friars scored 72 in both games this past week, led by huge individual performances from David Duke on Wednesday night and A.J. Reeves on Saturday. Against Marquette it was enough, but that wasn’t the case against a Georgetown team returning from a three-week layoff. David Duke absolutely went off against the Golden Eagles (31-6-6) but was ice cold in D.C. and rimmed out a FT that would’ve sent the game to OT in the waning seconds. A.J Reeves picked up the slack with 28-5-5, but not enough of his late jumpers fell in an incredibly disappointing loss that hurts Providence’s NCAA Tournament hopes immensely. No matter how downtrodden the opponent, no team can expect to win a whole lot of games after giving up 17 offensive boards & getting out-rebounded by 14. Nate Watson fouling out loomed large late.

The Friars’ path to Indiana doesn’t get much easier with match-ups against a pissed-off Seton Hall team and a St. John’s team who has found their rhythm lately. Both games are at home, though and a 1-1 split against quality opponents might put Ed Cooley’s squad back on the bubble.

Dawson Garcia continued to struggle to score against the Friars, but answered with a 20-9 performance in which all five Marquette starters scored in double-figures against St. John’s. The Golden Eagles impressively erased a 15-point halftime deficit by scoring on nine consecutive possessions early in the second half Sunday, but the result ended up being the same as their previous three contests – another close loss. Both St. John’s-Marquette games came down to the wire this season, the first a two-point win for the Golden Eagles, the latest a disappointing loss by the same margin.

This was as tough a week as we’ve seen this season for Butler. The Bulldogs managed just 106 total points in two games this week failing to score more than 55 in single game. A wise man once said “When you can’t make shots you’re going to lose” and that is the best way to describe the week for Butler as they 34.4% for the entire week. That drops Butler to 146th in offensive efficiency according to KenPom which will not win you many games in a Power Conference.

It’s a winnable week for Butler if they can start making some shots. They start the week Tuesday night in Milwaukee against Marquette before heading back home for a Saturday matchup with DePaul.

Georgetown with the stunner this week knocking off Providence by 1 in DC. Their gift is not last place in our rankings. It really wasn’t a pretty game, but the Hoyas were able to hang on for the win behind Chudier Bile’s 19 points and 9 rebounds off the bench. Georgetown used a +14 advantage including 16 offensive rebounds to knock off the Friars. They were also able to hold David Duke to just 5 points (although AJ Reeves went off for 28). It was a much needed win and something for Patrick Ewing to try and build off of. They need to continue to control the glass and take away their opponent’s best scorer to compete. We get to see how much that win carries over on Wednesday as they travel to Creighton.

The Blue Demons failed to defend home court twice as they ran into a hot St. John’s team at the wrong time and dropped a surprisingly close one to Creighton. DePaul gave up 49 first-half points to the Johnnies and couldn’t ever close the gap. Pauly Paulicap followed up an absurd 16-point, 16-board effort by getting in foul trouble and failing to make a lasting impact in a game that very well could’ve turned out differently if he had played meaningful minutes. There are no moral victories in a down season, but Dave Leitao’s team kept it impressively close without Charlie Moore against a heavily-favorited Creighton team behind a career day from Ray Salnave. He scored 21 and made more threes on Saturday night than he’d made the entire season. Javon Freeman was the only other Blue Demon to score in double figures with 13, and DePaul managed to score just 62. Even when they have off shooting nights, that won’t get the job done against Creighton.

Hopefully Charlie Moore’s elbow injury isn’t too serious and he can return as DePaul faces off at home against Xavier tomorrow before traveling to play a struggling butler team Saturday.