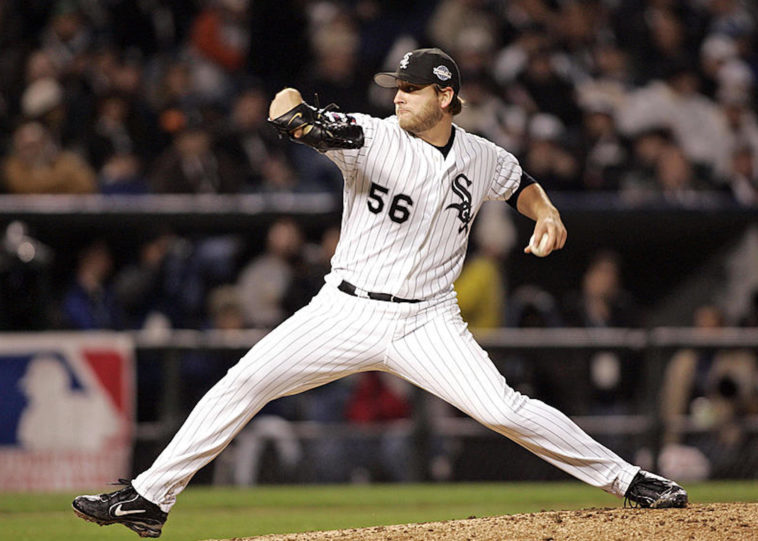 I suppose I should preface this post by clarifying that I do not, incredibly surprisingly, possess a vote for the Baseball Hall of Fame.  With the Hall of Fame announcing the 2021 class (if anyone hits 75%) later today, I’ve been thinking a lot about who I would put on my ballot.  Most choices are easy, but there’s one that took me some thought before pulling the metaphorical trigger.   I’m talking about, of course, Mark Buehrle, the former White Sox ace who was a bastion of durability during his time in Chicago from 2000-2011.

Call it homerism, being subjective, whatever you want.  As a diehard White Sox fan who had many of my favorite memories of the team powered by Mark Buehrle, my mind is made up.  Mark Buehrle is, in my eyes, a Hall of Famer.

Look at these plays by Buehrle. Mercy! pic.twitter.com/mrlAH397HS

On that same token, I’m not delusional.  I’ve accepted the overwhelming likelihood that Mark Buehrle will almost certainly never reach 75% of the BBWAA vote and that his candidacy will likely rely on a Harold Baines-like intervention from the powers that be.  Given the tracking so far, this is the obvious outcome.

And with just over a week to go for the Hall of Fame announcement and 150 votes in @NotMrTibbs tracker… yeah… still not going to see anyone make it. Although Schilling is the closest, I don't think that really has any chance.
(Margin of error ±5% for returning, ±7.5% for new) pic.twitter.com/CgXeU1vsgw

However, it does seem highly likely that Buehrle will at least hit the 5% threshold to stay on the ballot.  This may not ultimately lead to enshrinement, but hanging on the ballot for a few years would be a nice consolation prize.

The thing with Mark Buehrle, and perhaps the biggest knock against his candidacy, is that most people likely never thought they were watching a Hall of Famer when he pitched.  He peaked out at 5.9 fWAR in 2005 (of course), which was the only season he cracked the 5 threshold.  He never won 20 games (for those who are into that sort of thing), never had a season with a Herculean sub-3.00 ERA, and never struck out over 165 batters in a season.  He didn’t like up the radar gun either, living in the mid 80’s on his fastball.

Watching Mark Buehrle pitch wasn’t like watching the obvious candidates of this era – Clayton Kershaw, Max Scherzer, hell, even Chris Sale for a time with the White Sox.  Buehrle never blew away batter after batter with a mind bending breaking ball or a 100 mph rocket four seamer up in the zone.  When it came to shock and awe on the mound, Buehrle didn’t have it.  No argument there.

I suppose with Buehrle’s candidacy, it all depends on how you view the Hall of Fame.  Is it an elite club reserved only for the very best, those players that you knew were Hall of Famers every second of their career?  Only those who became god-like figures in baseball, as long as they were never mentioned in the same breath as PED’s?  If that’s your Hall, then Buehrle wouldn’t make the cut, not even close.

But that’s not it for me.  I’ve long maintained that the Hall of Fame, in my eyes, is meant to tell the story of baseball, celebrating the highs and lows of the sport.  For better or worse.  In that viewpoint, it’s meant to celebrate those players that added some unique chapter to the story, something that may fit outside of the cookie cutter Hall of Famer mold.  I’ve always been more frustrated at players who didn’t get in over those that did – no point in being upset over someone getting to take the stage at Cooperstown.

With that in mind, what Mark Buehrle did have makes him even more special as a player.  I’ll throw the whole slate of numbers here, but it truly does go beyond the FanGraphs page.

What Mark Buehrle did have, over all those years, was a sustained period of extremely unique greatness that I don’t think we’re likely to see again in the sport.  For those who may not be aware or have access to Google, Buehrle was a 38th round pick of the White Sox in 1998, and then ascended to the big leagues after just 2 years and 36 minor league appearances.  From there, in the words of Hawk Harrelson, it’s HISTORY:

Mark Buehrle was in vintage form on Opening Day 2010, tossing 7.0 innings of scoreless ball vs. the Indians, but it was his spectacular defensive play that was the true highlight! pic.twitter.com/jOrpp38ceC

One hour and 54 minutes of #SoxRewatch greatness.

Two of the best lefties in White Sox history square off as Chris Sale takes on Mark Buehrle as the Toronto Blue Jays visit Chicago. Tune in on Facebook and YouTube: https://t.co/vSfw3EUEa9 & https://t.co/oxRkaJUuZI pic.twitter.com/ukloCcDutg

This isn’t to say everyone who threw a perfect game should be in the Hall, because I won’t be writing this for Philip Humber in a couple years (sorry Phil).  However, it is clear that Mark Buehrle was a unique player in baseball over those years, perhaps the last of a dying breed of workhorses.

As I mentioned before, it really goes beyond the numbers though – Mark Buehrle was an everyman, someone who went out, threw the ball not much faster than the best player we would’ve seen in High School or Babe Ruth League, and got you in and out of the ballpark in as little time as possible.  Rinse, wash, repeat.  That resume makes for one hell of a unique plaque in Cooperstown.

Not to mention, after retiring he basically went back to being a normal, everyday guy.

For that reason, Mark Buehrle, in my mind, deserves Hall of Fame consideration.  If I had a vote, he’d have it.  He may not ever get enshrined in Cooperstown, but getting to stick on the ballot would be a worthy prize for one of the best White Sox pitchers ever, a player we almost certainly will never see the likes of again in Major League Baseball.