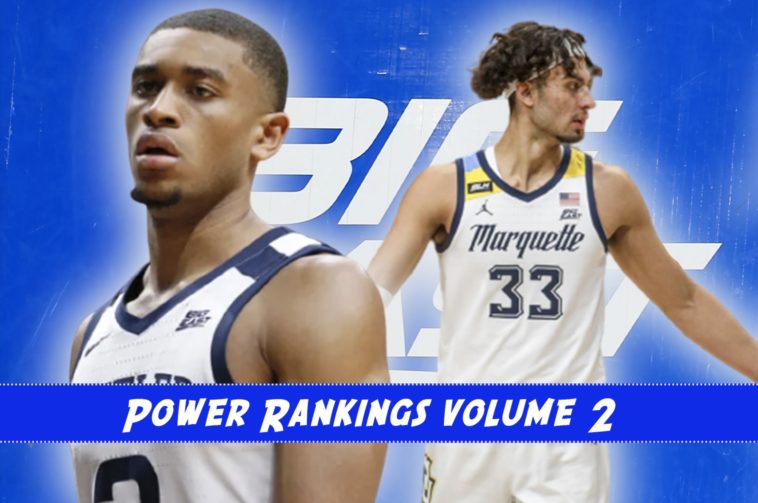 This week was the Big East’s most COVID-riddled since conference play started as Villanova, Seton Hall, Xavier, and Georgetown sat idle. On the other side of the coin, St. John’s played three games in a seven-day span, winning their most recent in come-from-behind fashion at UConn. Previously the hottest team in the league, Creighton saw their six-game win streak come to an end in frustrating fashion at Hinkle Fieldhouse.

Though they haven’t played since two days before Christmas, Villanova didn’t budge from their #3 national ranking. After long last, they resume their season this week as they play host to a well-rested Seton Hall team. The Wildcats conference record is an unblemished 3-0, though every team besides Xavier and DePaul have played at least twice that many conference contests.

Jay Wright’s team had another week off due to COVID concerns and remain #1 in our Big East rankings and #3 in the AP Poll. They get back on the floor Tuesday with Seton Hall coming to town followed by Providence on Saturday.

After hanging 89 on Seton Hall and 97 on St. John’s without Marcus Zegarowski, a week off turned out to be exactly what Creighton didn’t need. The Jays came out flat in Indianapolis, scoring a season-low 25 points in the first half. Denzel Mahoney caught fire in the second half, scoring 23 of his 29 points, but he and his teammates went cold at the precisely wrong time en route to a frustrating OT loss to an inferior opponent. Mahoney sunk a half-dozen consecutive shots at one point in the latter frame, but started the game cold and ended it similarly on his way to an absurd (especially in Greg McDermott’s offense) 22 field goal attempts.

Damien Jefferson and Christian Bishop were the only other Jays to score in double-figures in the game, and no other Creighton player outside of the aforementioned three scored more than 5 points. The big shots we’ve come to expect from Mitch Ballock flat out didn’t fall. In games without Zegarowski he’s absolutely got to get up more attempts. Late missed free throws did Creighton in yet again, just like the Kansas and Marquette losses. On one hand, the Jays are a handful of free throws from being undefeated, but they’re also some late magic from having dropped contests against UConn and Providence.

Creighton looks to right the ship with home games against Providence and UConn – these previous road contests ended up being the most unnerving wins of the season. Here’s to hoping this week goes a bit more smoothly.

Seton Hall was one of four teams in the Big East last week with a week off due to COVID. Their game on Saturday was called off due to issues at Xavier. The good news is that it gives even more time for Harvard transfer Bryce Aiken to recover, the bad news is it is taking a team off the floor for an extended period of time. Kevin Willard’s team has played as many games as anyone in the Big East and the country. The Hall is back in action Tuesday night at Villanova before a trip to Butler on Friday.

Marquette was the only Big East team that played games to survive the week unscathed. They did so behind impressive showings from young guns Dawson Garcia against Providence and Ohio State transfer DJ Carton at St. John’s. The Golden Eagles began the week with a convincing win over the Friars in Milwaukee despite shooting less than 30% from deep. Garcia led all scorers with 20 points, and four of his teammates scored in double figures as well, including an impressive 11 point-6 board performance off the bench from Justin Lewis.

Marquette fell ass-backward into our best week title after St. John’s failed to convert on two looks in the closing seconds in Queens. Coach Woj’s guys committed 19 turnovers, nearly choked away an 11-point halftime lead, and assisted on less than half of their made shots, but were absolute nails from the free throw line in a 73-71 thriller. They look to continue their winning ways when they host DePaul Saturday evening.

COVID issues within the Musketeers’ program shut the team down last week and will keep the program on pause the rest of this week. Xavier has played just 5 Big East games so far, 3rd fewest in the League ahead of Villanova (2 games this week) and DePaul (2 games this week). Where/how these games will be made up is going to be a challenge for the Conference.

Lavall Jordan’s Bulldogs hadn’t scored 70 points since outlasting Providence 2 days before Christmas, but managed to do so in OT, and it was juuuust enough to oust the Jays. Their week got off to a bad start after a sloppy loss at St. John’s, but a trip home to Hinkle resulted in a heck of a rebound against what had been the conference’s hottest squad. Bryce Nze & Aaron Thompson could do seemingly whatever they wanted offensively inside the 3 point line, and Butler’s young guards showed impressive maturity, which gave the Bulldogs their most impressive win of the season. The team committed just seven turnovers against a much more experienced lineup.

They face off with DePaul in Chicago tonight before hosting another conference heavyweight in Seton Hall this weekend.

UConn eked out a too-close-for-comfort win at lowly DePaul (though all conference road wins are noteworthy even with no fans) only to blow a two-touchdown lead at home to St. John’s yesterday. The Johnnies didn’t so much win the contest as much as the Huskies flat out gave the game away. James Bouknight’s absence loomed large with each late-game error, but the good news is that he may not be out as long as originally thought – potentially just a month.

Connecticut just needs to tread water without their star in the lineup, though it doesn’t get any easier with a weekend excursion to Omaha. UConn nearly beat Creighton to tip off their conference season in Storrs, but that was largely due to Bouknight exploding for 40 points in a game that likely would have had a different result had fans been in attendance. Dan Hurley will take the week to drill Butler’s Bluejay-beating blueprint into his battered boys.

Providence fell by a score of 79-69 in their only action last week at Marquette. Four Friar starters scored in double figures, but that didn’t do them much good given the fact they let five Golden Eagles players do the same. Providence absolutely cannot win games where Nate Watson only has a measly three rebounds. They lost the rebounding battle by nine and gave up thirteen offensive boards, which is not something Ed Cooley-coached teams do very often. This team isn’t designed to win in games that refs get whistle-happy, and though the Friars shot 9/19 from distance and 80% from the charity stripe, Marquette shot 24 free throws to Providence’s 15.

This week doesn’t look promising as the Friars travel to play a Creighton team looking to prove their Butler loss was an aberration before heading to play a Villanova squad wanting to show their long layoff didn’t result in a drop-off in play.

It was a busy week for St. John’s, but it ended up being a good one. It began with a home win Tuesday against a Butler bunch that struggled to score. They followed that up by dropping an incredibly entertaining, nail-biting Big East matchup to Marquette when two last-second shots got blocked & rimmed out. If the Johnnies can keep up 2-1 stretches Mike Anderson will assuredly be a happy man. Their comeback win on MLK day at UConn was their first in 9 tries dating back to before much of the roster was even born – 2000. It was a tenacious, relentless defensive effort. St. John’s won’t win a lot of games that Julian Champagnie shoots so poorly in, but they’ll take this potentially season-defining win no questions asked.

Teams that win games that they trail for 35 minutes are tough to reckon with, which a DePaul team that has barely started their season may come to realize when the well-rested Red Storm visit Chicago next week.

COVID has paused the Georgetown program. They did not play last week and will remain shut down this week as well. The Hoyas are struggling, this extended break could be a nice reset for Patrick Ewing and company.

DePaul simply needs games at this point. The Demons took UConn to the wire this week and a team that has played more than 5 games on the season probably wins. Probably. They filled a game mid-week with a matchup against Valpo to get their second win of the season. Like I (B-Frank) said at the top, DePaul just needs games. Their team and especially offense is just out of sync and needs to find a rhythm to be competitive. Tuesday presents a chance for DePaul to get on the board in Big East play with Butler coming to Chicago before the Blue Demons head north to Marquette on Saturday.