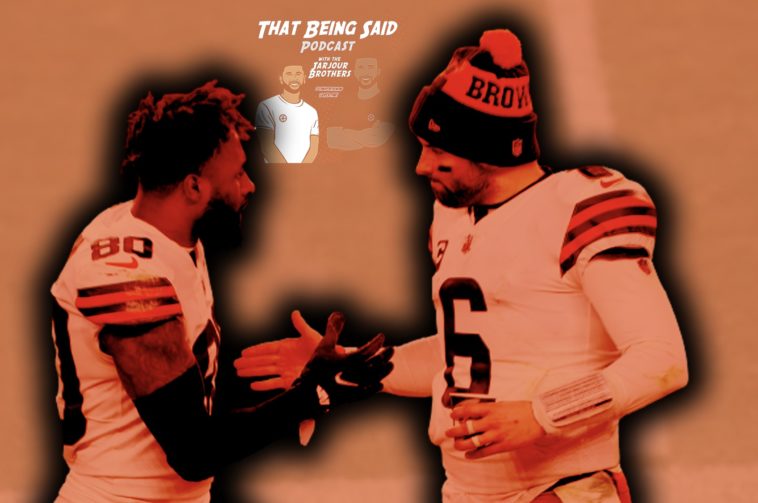 We almost couldn’t believe it as much as you, the Cleveland Browns really came out and not just won a playoff game, but they DOMINATED the Pittsburgh Steelers. No coach, no problem. Plus, Baker Mayfield proved to be the quarterback that the franchise has been looking for.

Okay, who didn’t absolutely LOVE the Super Duper Wild Card Weekend? We sure did and it was A LOT to talk about, 7 games, many weird moments, and a whole lot of football baby. With that said, George & Sami of That Being Said Pod are back for Episode 690 of That Being Said Podcast… Go to www.BetUS.com and use promo code: TheSportsONTap to get 125% bonus on whatever you deposit.

Per CNN – The Cleveland Browns know all about hard knocks. The team hadn’t won a playoff game since 1995 before Sunday. Their head coach was in isolation after testing positive for Covid-19. So the weekend clash with division rivals Pittsburgh Steelers had all the earmarks of another painful evening for the long-suffering Browns fans.

However, led by superstars Baker Mayfield and Myles Garrett — and helped by regular Steelers errors — the Browns raced into a 28-0 first quarter lead, eventually winning 48-37 in the first round of the NFL playoffs. Now it’s the Browns’ turn to dish out the hard knocks. It was the franchise’s first postseason victory since 1994, and after a week where the team could only practice once because of Covid-19 protocols, acting head coach Mike Priefer praised the team’s resilience.

“I told them after the game … I admire them so much and I respect them,” special teams coordinator Priefer said. “They have had so much adversity in terms of schedule changes — I know everybody has had adversity and I am not trying to say we had any more adversity than anybody else — but at the end of the day, this was a difficult week and a playoff week, but they never batted an eye.”

Al Michaels really humming along to Mood by iann dior and 24kgoldn during an injury ? #Browns #HereWeGo pic.twitter.com/sEaNNplThT

Immediately after this Chase Claypool runs to TikTok to talk shit about the #Browns… ?

This new version of the Steelers is soft… #herewego https://t.co/ByREOo7NdT

Did you enjoy @Nickelodeon football? & what other channel should do it? ? @georgeontap & @samiontap discuss. Link in bio for latest episode! 691 is here! @thesportsontap