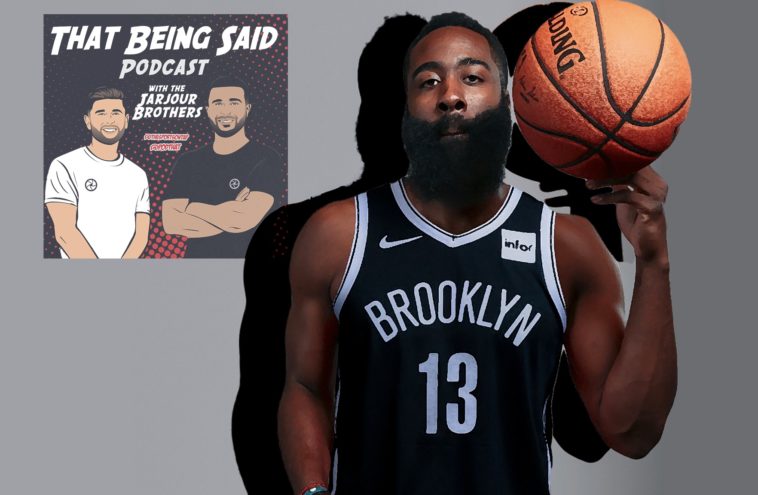 Well this was an INSANE day of NBA nonsense. James Harden decided to stop trying, and forced his way to the Brooklyn Nets. Kevin Durant, Kyrie Irving, and James Harden are now all on the same basketball team and the rest of the NBA is put on notice…..Well well well, James Harden was an asshole all week, and what do you know, he got his wish. James Harden is now with Kyrie Irving and Kevin Durant in Brooklyn. The Nets will be unstoppable…. + We talked the NFL Divisional Round Weekend and our predictions (41:50). With that said, George & Sami of That Being Said Pod are back for Episode 692 of That Being Said Podcast… Go to www.BetUS.com and use promo code: TheSportsONTap to get 125% bonus on whatever  you deposit or use this link here.

Per Sports Illustrated – According to multiple reports, the Rockets will receive Brooklyn’s unprotected first-round picks in 2022, 2024 and 2026 in the deal. Houston also has the right to swap first-round picks with Brooklyn in 2021, 2023, 2025 and 2027. The Rockets have also acquired Pacers guard Victor Oladipo, Cavaliers guard Dante Exum and Nets forward Rodions Kurucs.

The Pacers are receiving guard Caris LeVert and a second-round pick from the Rockets in Wednesday’s blockbuster trade, while Brooklyn center Jarrett Allen and forward Taurean Prince will reportedly head to Cleveland.

Brooklyn is also receiving a 2024 second-round pick from the Cavaliers, according to ESPN.

Will they now win the NBA Finals?? Full Podcast here:

EMERGENCY POD ?: James Harden really got traded to the Brooklyn Nets after being an asshole ? @GeorgeOnTap & @SamiOnTap break down their championship odds ?

What do you think?!

Lakers fans knowing that they’re about to face the Nets with James Harden Kyrie Irving and Kevin Durant in the NBA Finals pic.twitter.com/pZpkJAKjut