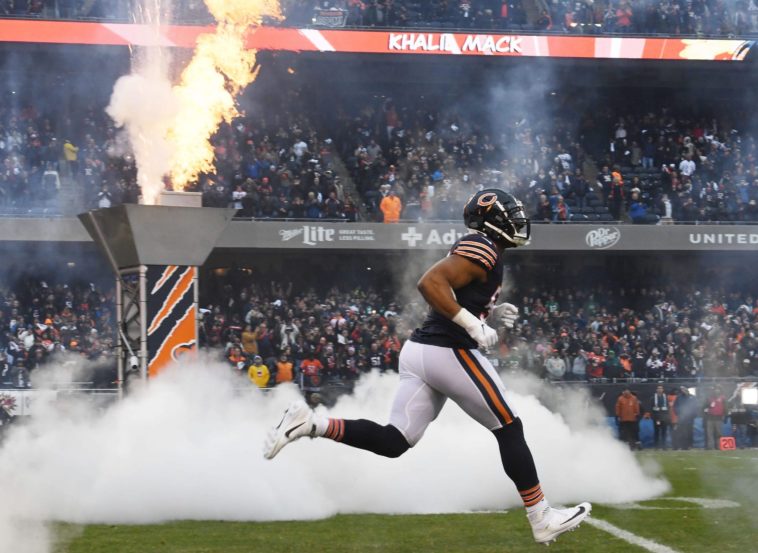 This 2020 season has admittedly been a tough one to be a Chicago Bears fan.  We’ve gone from the heights of a mirage of a 5-1 start, to the Fire Everyone pit of a 6 game losing streak, to a 3 game win streak that then transitioned to a classic loss to the Packers to close the season.  When all was said and done, the result was incredibly poetic: an 8-8 record perfectly balanced in mediocrity, the second consecutive .500 season for Matt Nagy, and a backslide into the newly created 7 seed in the playoffs courtesy of our friends in Los Angeles.

No overwhelming optimism, no raucous Club Dub celebration after knocking the Packers out of the one seed and clinching a playoff berth with a win over the arch-rivals.  Nevertheless, these Bears are playoff bound.

The playoff appearance doesn’t change the grocery list of fundamental flaws that are present with the Bears.  You can really take your pick there – Matt Nagy not being the long term answer at head coach, Ryan Pace failing to build a competitive roster on the offensive side of the ball, Mitch Trubisky being the next name in the long line of Bears quarterbacks over the last 70 years failing to shake the ghost of Sid Luckman.  Hell, any combination of those three returning likely presents an issue unless past performance is completely shed.

There are then more existential problems stemming from the top down leadership of the McCaskey’s and Ted Phillips, and the thought that until those things change nothing else will.  New names, same result.  In my opinion, this is the deeper issue with the Bears franchise, but the one least likely to change.  Alas, thus is life as a Bears fan.

All of these problems are very real, and making the playoffs at 8-8 doesn’t change them.  There will be plenty of time to answer (or not answer) these questions in the offseason.  However, as a fan first and foremost, I’m giving myself the day off from worrying these things.  For once, I’m going to enjoy what we have.

For today and however long this playoff run lasts, I’m all in on the Nagy-Trubisky-Pace Express Train.

The fact is, the Bears are in the playoffs.  I’ll repeat – THE CHICAGO BEARS ARE IN THE NFL PLAYOFFS.  For those counting at home, they have had one previous playoff game in the last decade, that being the infamous Double Doink Game, which remains to this day the only time I’ve ever felt physically ill as the result of a sporting event.

After that game ended, I remembered feeling a certain emptiness, not because of the loss itself, but because of how difficult it is to be in that situation in the NFL.  A team of destiny feeling surrounded those 2018 Bears, a team that was rolling off win after win with a certain aura around them.  Mitch was a Pro Bowler, and the defense was ripping away turnovers at an absurd clip.  Teams like those don’t come around often, as we’ve learned over the last two seasons, and not winning it all with one feels like a failure.

For one second though, forget how that season ended.  Instead, think back to what the feeling was in Chicago before kickoff in 2018 against the Eagles. The city was blue and orange as far as the eye could see.

Sure, the 2018 team didn’t progress as we had hoped, but I can still remember that feeling heading into the playoffs like it was yesterday.  After the most fun season I’ve ever had watching Bears football, it was Super Bowl or bust in my mind.  There was NO CHANCE they would lose.  Obviously, things didn’t go that way and haven’t for the last several years.

But, for three hours today, just think of that feeling. What it was like to, for once, have hope that these Bears were the team that could do it.  Hell, as a Bears fan that feeling seems to only come once every 15-20 years or so.

These 2020 Bears may not be Super Bowl bound, and they very likely will end up losing in New Orleans.  However, for three hours today I’m taking the “on any given Sunday mentality”.

Not gonna worry about the Bears future rn. I’ve seen 2 playoff appearances in the last decade between the Sox and Bears. To each their own but if you can’t sit back and enjoy a playoff game, 8-8 or not, what’s the point of being a fan

I’m not trying to tell anyone else how to fan.  The beauty of being a sports fan is that there’s really no right or wrong way to feel about your team.  If you want to be upset the Bears don’t have a good draft pick and are resigned to running back the braintrust one more time, go ahead.  If you want to be able to say “I told you so” if the Bears lose, that’s great.

I may agree with you most other days of the year when it comes to the Bears, but on a playoff gameday?  Not a chance.

To me, the playoffs present a unique opportunity to just sit back and live in hope of your team.  Especially in football, where you only have to win one time to advance.  For a quick lesson on what this one time concept means, I’ll defer to my friends on the Little Giants:

You know when I said this generation has nothing to inspire them?

Little Giants came out when I was 13 years old, and it's one of my favorite movies. This scene is why.

What do you think I used to beat Sekiro when I was getting frustrated? I only have to win once. pic.twitter.com/VxsvllxNZS

I don’t care if Drew Brees and Sean Payton beat the Bears in 99/100 simulations.  On this day, none of that matters.  Whatever the odds are, there’s hope.

In my opinion, sports are meant to be an outlet for entertainment, where you want your team to win when they take the field, “Trust the process” be damned.  While it seems the White Sox rebuild is going to pay off, watching 3+ years of intentional losing for a lottery ticket at winning is tough to accept.  The Bears have a chance to win NOW, and I’m not going to not enjoy that for the sake of being miserable.

Whatever it is, for once I’m choosing to just sit back and be an irrational fan that is behind this Bears time with no sense for what the future holds.  For three hours on this beautiful Sunday, the choice to me is easy.  There’s too much wrong with this world to give myself another reason to be miserable.

So, that only leaves one thing for today – Bear the hell down, and take it to the Saints.  Lest the boys from New Orleans forget what happened the last time we met in the playoffs.  If we did it with Rex, we can do it with Mitch.

The Bears defeat the Saints in the NFC Championship Game to advance to the Super Bowl! pic.twitter.com/YzNCQGAD71