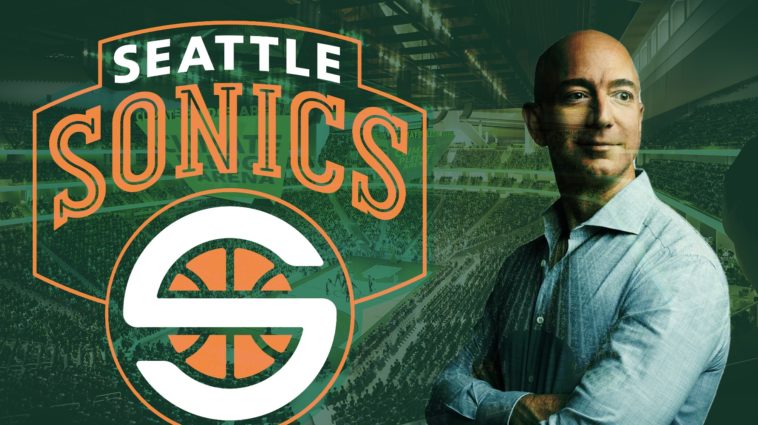 With the NBA potentially looking to expand with two new teams and a bill of $1.5 billion dollars for the expansion fee many around the basketball world and especially in Seattle have speculated about the return of the Seattle Supersonics to Seattle:

Seattle Times: Oak View Group co-founder Tim Leiweke, who is spearheading a $930 million overhaul of Climate Pledge Arena, said after Silver’s comments that Seattle will be positioned to pounce on a team whenever the NBA opts to make one available. Leiweke, who spent years helping run multiple NBA teams, worked closely with Silver and the league’s head office on arena ventures overseas and has outfitted Climate Pledge with nearly $50 million in NBA-specific locker room and media installation designs.

On the latest episode of The Just Talk Podcast I broke down who I thought would be the best ownership groups to own and potentially bring back the Seattle Supersonics.

If the Seattle Sonics come back who do you want to see become the owner? I think a city owned team like the Green Bay Packers would be amazing. What do you think? On the latest episode of @TheJustTalkPod pic.twitter.com/0wswlzoQFD

Amazon already has put their imprint on South Lake Union. Jeff Bezos could make even a bigger impact bring the “Prime Time Sonics”.

Hey how can we get people to forget their conspiracy theories on Bill Gates? By bringing the Sonics back.

Ok this would be my favorite. This style would be the most fun and I don’t think it’s possible but we’d love it.

Kevin Garnett has mentioned it before but I do not know how he could pull it off. But he could spearhead a group of buyers and be the face of the group.

Kevin Garnett wants the Sonics back in Seattle. Well, @NBA I think everyone knows this NEEDS to happen.. stop playing with us! #SaveOurSonics @SONTSeattle @SONTHoops https://t.co/Nd3qOc4iez

Almost pulled it off by bringing the Sacramento Kings to Seattle. He’s been quiet since but I am sure he’d be part of any discussions that take place.