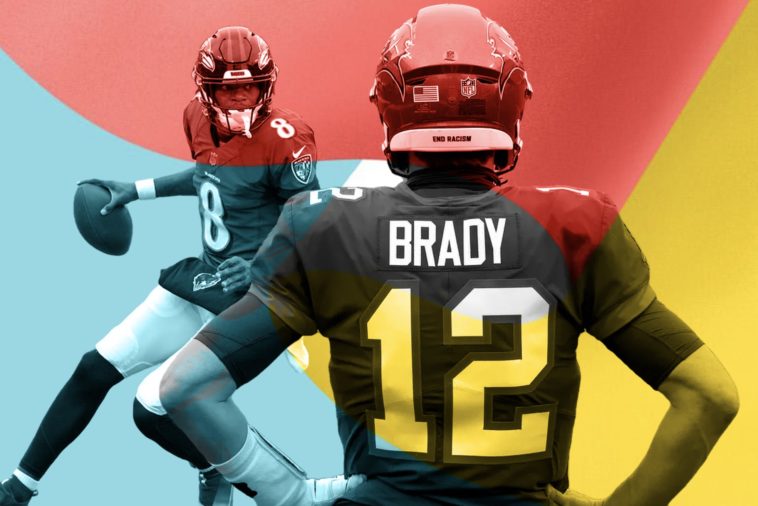 There’s 14 NFL teams left and that leaves 14 Quarterbacks in the NFL. On the latest episode of the Just Talk Pod with George Jarjour. George broke down not only his power rankings of the final 14 quarterbacks but also what is at stake for each one during this postseason.

Nothing. Already comeback story of the year. Incredible achievement. Just not that good anymore.

Shouldn’t really be starting anyways. Maybe it’s Goff. Nothing really at stake here. But if he wins a playoff game many will question whether Goff is worth the money or not.

Future at stake here. If Mitchell Trubisky can win a road playoff game many are going to wonder if he’s worth sticking around or if he looks absolutely awful many will call for his job.

A lot of first round exits for Brees in his career. Weird game, this could be the end of his career.

Most at stake here. Two years of 1 and done in playoffs Lamar Jackson has to prove he’s worth a huge extension and that he can actually win the big game.

"I just want to respect you guys. I would want to be respected if I was doing your job." @Lj_era8 on addressing reporters by their names/Mr./Ms. pic.twitter.com/3dhT9ty73d

Not much at stake here. I had him slightly above Lamar in playoff QB rankings because we’ve seen him win two playoff games an we saw him beat Lamar last season head to head.

Only reason he’s here is Super Bowls. But another guy who we can really find out what the future of the franchise looks like by his performance. Is it time to rebuild or are we looking more runs with Big Ben.

Josh Allen getting his first playoff win and looking good is big for the Bills if they want to win a Super Bowl whether it is this year or next year or during this Josh Allen window.

What’s at stake? Him versus Aaron Rodgers and a place among the top 10 QBs of all time.

Maybe going to be his best opportunity to win another Super Bowl in his career. That’s huge and would put him in the elite of the elites all time and most likely put him above Brett Favre as the best Packer QB of all time.

Another player who can really put himself in position to become an all-time great. Weird saying that in his third year as a starter in the NFL. But two Super Bowls in three years as a starter and being only 25 years old. These are big moments for Mahomes.