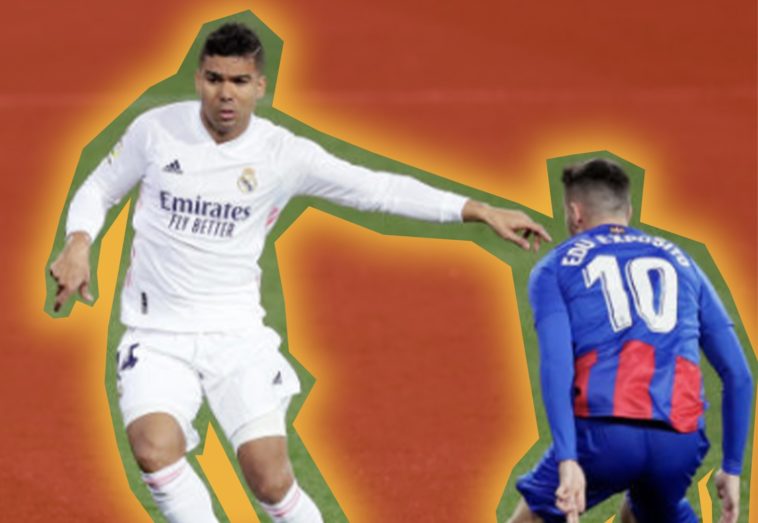 Real Madrid defeated Eibar 3-1 to claim their fifth straight victory in all competitions.  Although Madrid looked impressive, this was a tightly contested match.  It was not until extra time that this game was decided with a third Madrid goal.

Benzema started the scoring early on, and 10 minutes later, he teed up Luka Modric for Madrid’s second goal. Madrid could of had 2 or 3 more in the first half, notably from Rodrygo and a gorgeous Benzema goal that was judged offside.  Both chances were from brilliant passes by Toni Kroos.

Eibar’s Kike pulled one back for Eibar with a phenomenal curler from 25 yards out.  There were chances on both sides in the second half, but ultimately, Madrid’s class in the midfield won the day.  Lucas Vasquez finished the job with a goal in added time (much deserved after hitting the post multiple times in past games).  Sergio Ramos was lucky to get away with a possible handball that could have tied the game in the second half.

Zidane continues to put out much of the same players, and they continue to deliver.  Madrid’s back four is healthy and playing well.  The classic midfield trio of Casemiro, Kroos, and Modric are playing at a level above every other midfield in Europe.  Up front, Vasquez is playing great in support of Benzema, who is behind only Lewandowski on current striker form.  Karim has 10 goals in 10 games.  If Benzema keeps scoring, Madrid will keep winning.

This streak of form is the best Madrid has looked in the past 24 months.  Unlike their run last Spring to win La Liga, this year is different.  Their defense remains strong, but the team is producing more goals.  3 goals from this Madrid squad should see a W every time.