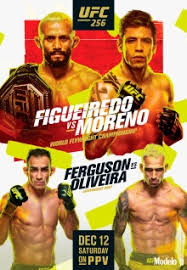 Saturday is here again and that can mean only one thing; the UFC is back and LIVE on PPV. 10 great fights coming at us tonight, headlined by a man going for the history books. Deiveson Figueredo was the headliner of UFC 255, where he defended his Flyweight strap. He’s now looking to defend his title only 21 days later. If he successfully defends tonight he will shatter the existing record of 56 days that is held by a pair of UFC Hall of Famers, Matt Hughes, and Ronda Rousey. Figueredo is a HUGE problem for the division so it comes as no surprise that he is such a heavy favorite tonight.

Not to be outmatched, the co-main event features an enormous lightweight fight between Charles “Do Bronx” Oliviera and the returning Tony Ferguson. Last time we saw Ferguson was in his 5 round war with Justin Gaethje for the Interim Lightweight belt, way back in May at UFC 249. Ferguson was obviously on the wrong end of that one as he got finished late in the 5th round. He makes his long-awaited return in a very tough fight. His opponent Charles Oliviera is on a 7-fight win streak in which he has finished all 7 fights while collecting 6 performance of the night bonuses. Some would say, he’s on fire. Something’s got to break.

Here’s a look at the full fight card for this evening. 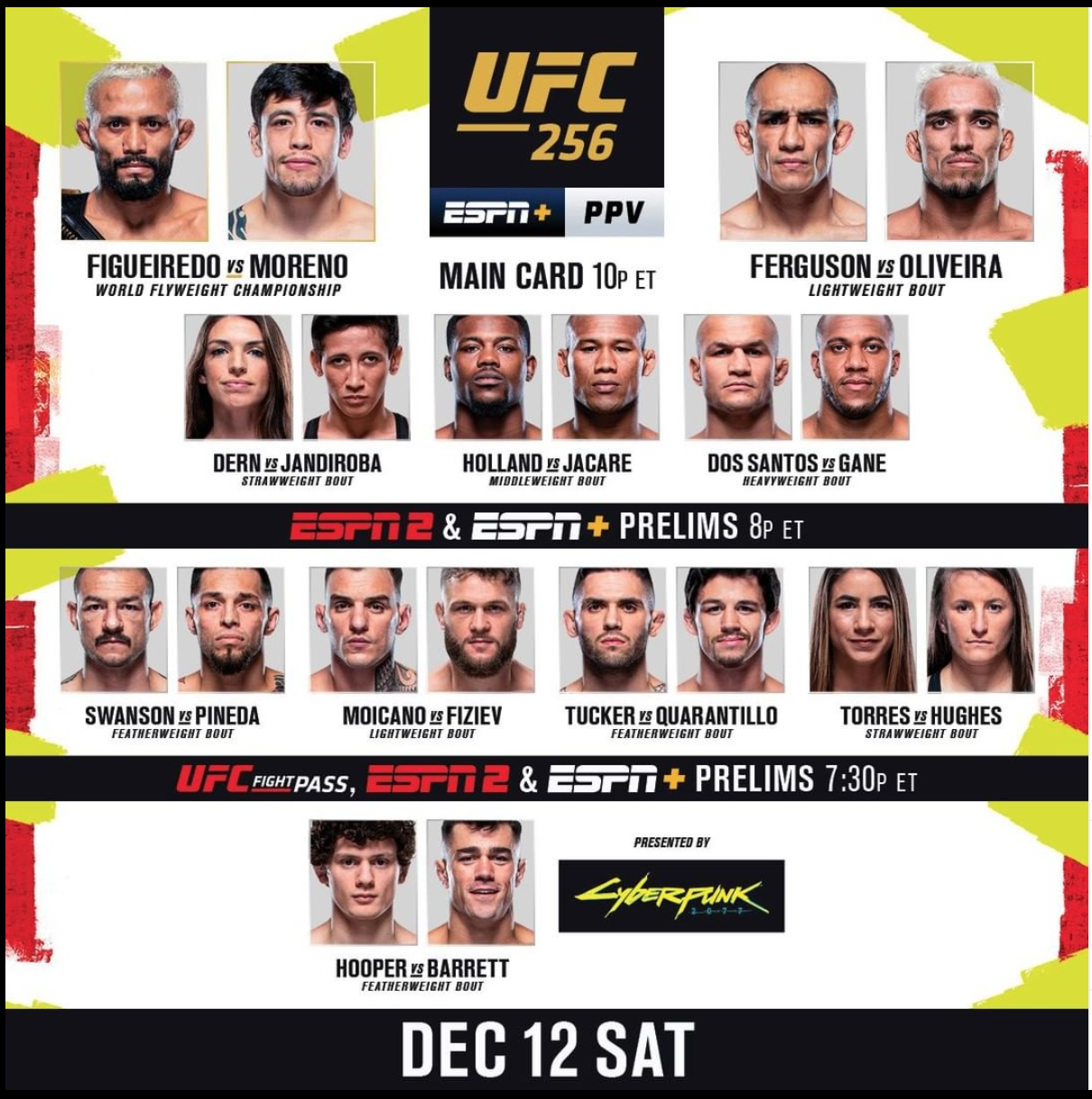 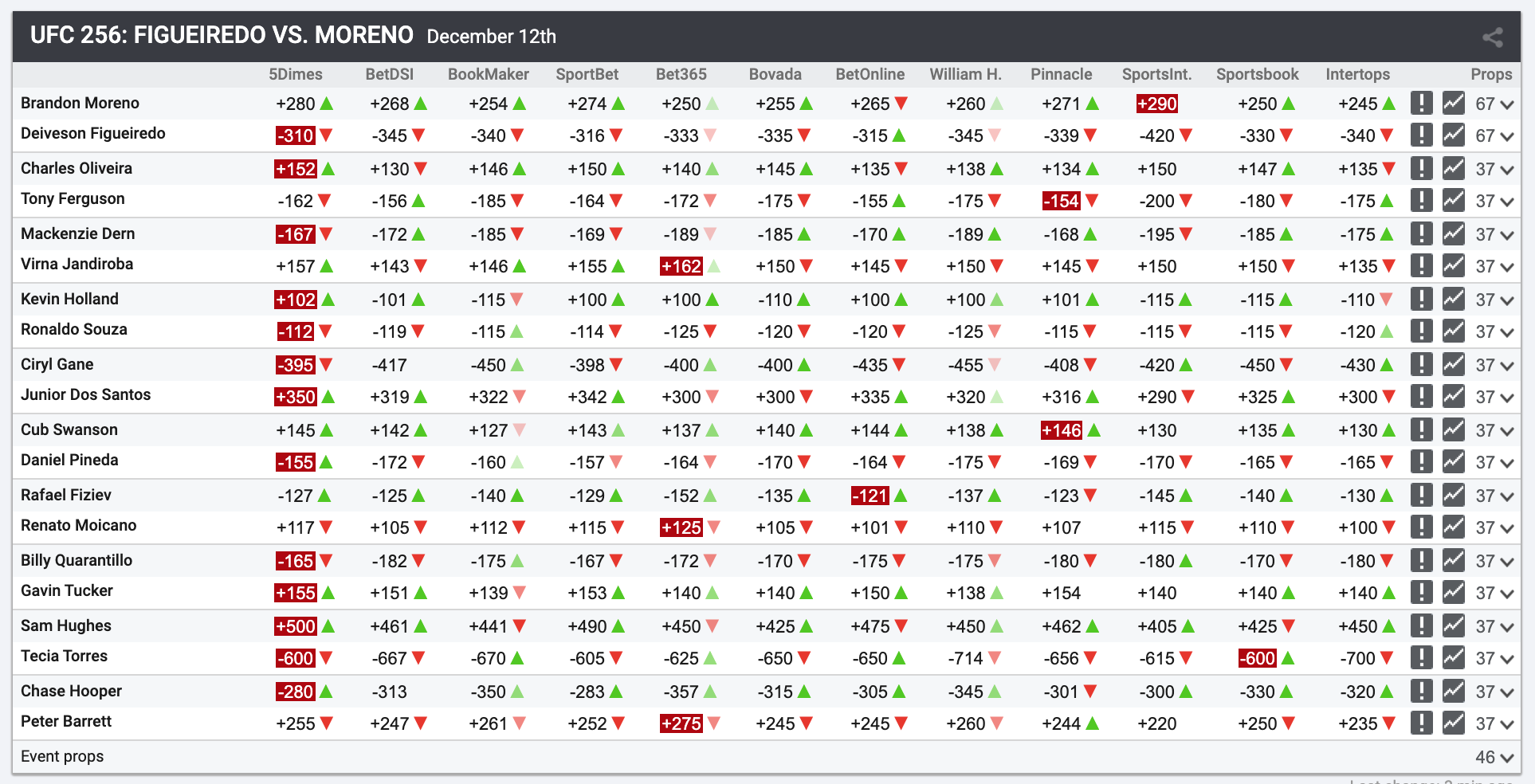 PICK: Chase Hooper (-280) – I don’t like betting on Hooper when he is this big of a favorite because he still is so young and many things can go wrong. I just think he has great raw tools and his demeanor is all you can ask for from a 21-year-old kid. Let’s ride with the mini Ben Askren in the first fight of the night.

PICK: Sam Hughes (+500) – Why not ride with the massive underdog. Sam Hughes is a relative unknown with 6 professional fights who is taking this fight on 6 days’ notice. Tecia Torres has fought pretty much every big-name woman in the UFC strawweight division. But Sam Hughes’s nickname is “Sampage” and all 5 of her wins have been finishes. Why not gamble on the “Sampage”???

PICK: Billy Quarantillo (-165) – Huge Billy Q fan, he’s tough as nails and he gets extremely crafty in there. Gavin Tucker is dangerous on the ground but I think Quarantillo has too much length for Tucker to be a factor.

PICK: Rafael Fiziez (-127) – I went back and forth on this one a few times. I like Moicano’s versatility and his ability to get the submission finish. I just think he struggles with these powerhouse strikers. Fiziev is about as dangerous as you can get on the feet. I have a feeling Fiziev gets the biggest win of his career in this one.

PICK: Daniel Pineda (-155) – Two crafty vets going at it in the featured prelims on ESPN. Both of these guys are coming off of big wins against up and coming prospects. Pineda is just a little more dangerous in my eyes, I think he ends up getting the W in a hard-fought fight that should go the distance.

PICK: Junior dos Santos (+350) – Ciryl Gane is one of my favorite prospects in the UFC right now. A former top kickboxer who has come into the UFC and started tapping people out, you truly love to see it. I just think the value is out of whack here. Obviously, I could be proven wrong extremely quickly if Gane steps in and dominates dos Santos straight from the jump, but I just have a really hard time seeing that happen. Junior dos Santos as a +350 underdog against a dude who has 6 fights in the octagon is just flat out disrespectful. I think at the very least he takes Gane to distance, I love the value in this pick.

PICK: Kevin Holland (+102) – Another number that has me puzzled, I just think Holland is trending up and Jacare is trending down. Surprised Holland isn’t the favorite here in this one. I know what Jacare has done in the past and I know he can’t stand being a gatekeeper for these young guys but I think Holland will make quick work with the old gator.

PICK: Mackenzie Dern (-167) – This is a very interesting match-up, two very dangerous women at strawweight. Both very dangerous on the ground, and honestly I’ve been going back and forth on this matchup all day. Dern is the younger fighter and is a little bit better on her feet. She also should be a little better on the ground too, although Jandiroba has beaten tougher competition as of late. I think I’m still going to ride with Dern, but it will be a tough fight.

PICK: Charles Oliviera (+152) – I think this fight is all about momentum. Ferguson clearly has the pedigree and was essentially on a better run than Oliviera is on now just two years ago. I just think that Oliviera is in great form and that cannot be understated, ride with the value here because of the big-name opponent. Ride with Oliviera.

PICK: Deiveson Figueredo (-310) -I mentioned earlier that Figueredo is going for history tonight, I really don’t think this train is going to stop. “Deus de Guerra” will continue to make history, he will hold the belt until Cejudo finally returns and then I really think he will give him a great fight. I know the number is high here, but be confident enough to play it.