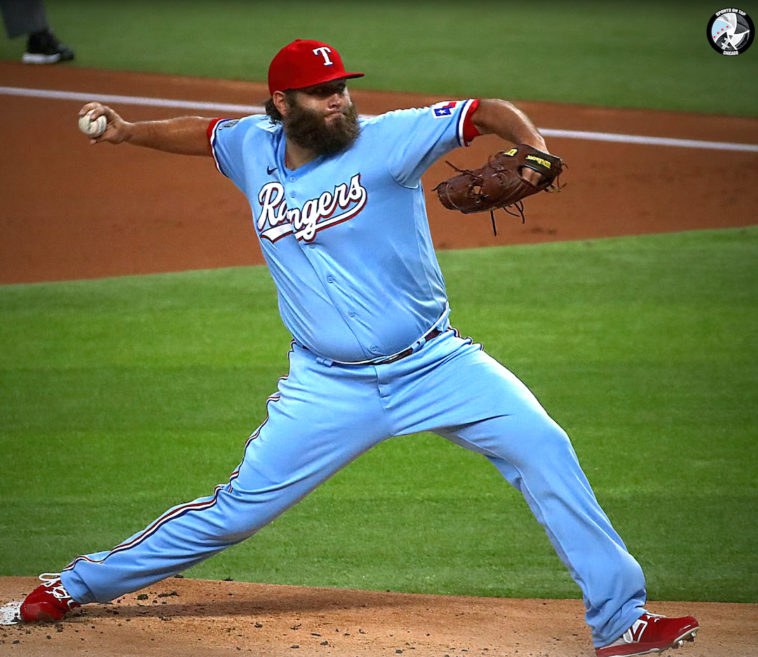 For the second year in a row, the White Sox and Rangers have completed a late night trade at the Winter Meetings, although this year’s installment of the Rick Hahn midnight special certainly carries more weight.  Just like that, the White Sox opened up their 2020 offseason by acquiring Lance Lynn, sending Dane Dunning and the artist known as Avery Weems back in return.

Right-hander Dane Dunning is going back to the Texas Rangers in the Lance Lynn deal, sources tell ESPN.

After the rumors around Lynn to the Sox flurried before an ultimately stagnant trade deadline, Rick Hahn got his guy.  Kenny Williams taught him well.

While the prospect cost certainly matters in this trade, you first have to consider what the White Sox are getting.  To put it simply, over the last several years Lynn has proven to a be a dependable 30+ start guy, hovering around the 200 IP mark for most of the last decade.  In the pandemic shortened 2020 season, Lynn led the Major Leagues in innings pitched and batters faced, with 84.0 IP and 344 batters faced.

Without harkening to the James Shields “innings eater” trade of 2016 too much, Lynn is a rare type in the majors today – someone you can count on to take the ball every 5th day for an entire season with as much certainty as you can have for that in this day and age.

Lance Lynn has been traded to the Chicago White Sox.

Lynn averaged over 100 pitches per game last year with a four-seamer that has returned 32.5 pVal across the last two seasons and a 13%+ SwStr rate.

One of the true workhorses left in the majors.

On top of that, he’s experienced a renaissance of sorts in Texas, racking up 8.3 fWAR to go along with a 22-14 record, 10.31 K/9, and 3.43 FIP over the past two seasons in Arlington.  Those two career years have resulted in two top-6 AL Cy Young finishes, including 2020 where he slotted in 6th placed between Dallas Keuchel and Lucas Giolito.

In terms of what the White Sox are getting, there is no doubt Lance Lynn pushes the 2021 team closer to the goal of winning a championship.  A rotation led by Giolito, Keuchel, and Lynn will rank in the upper tier of the American League for the regular season, let alone in a postseason series.

Even at a cursory look at Statcast-type numbers, Lynn has been in the upper portion of MLB starters over the past two seasons.  In terms of limiting damage and keeping runners off base, not many have done it better.  The overwhelming fastball velocity isn’t there, but he’s never depended on that, relying more on an elite spin rate for a pitch he throws almost 50% of the time.  That is something that should continue to age well.

When it comes to the return, there’s no doubt it’s unfortunate the gain of Lynn had to come at the expense of Dane Dunning. While Dunning may not have the pedigree of Michael Kopech or Dylan Cease when it comes to the pantheon of White Sox pitching prospects, he did accomplish something neither of those two did: he was pretty dependable and damn solid in 2020 at the Major League level.

Starting with his debut against Detroit, Dunning was able to make an impact on a team in the midst of a playoff race in his rookie year and became perhaps the most unlikely elimination game “starter” of the 2020 MLB playoffs.  And while it’s a shame Ricky pulling him with 2 outs in the first is the last moment Dunning will have in a White Sox uniform (barring a Gio Gonzalez-esque career arc), I’ll fondly remember his contributions in 2020.

However, no matter what Dane Dunning turns into in his career, I won’t second guess this trade.  The White Sox flipped a guy with seven career starts, and just their third highest rated pitching prospect (not counting Cease) for a proven impact pitcher with a combined 8.3 fWAR over the last two seasons.  Even for one year, that’s damn good value, the type that a team trying to win can’t pass up.

As the White Sox move into this next phase of contention, we can learn something from the North Side of town as the White Sox upward arrow and Cubs’ downward arrow have seemingly already crossed paths.  While I personally dislike many of the Cubs-Sox comps of recent years (i.e. Dallas Keuchel is the White Sox Jon Lester), it’s important to consider where we as White Sox fans will be whenever this era ends.

“I ask that every Cubs fan takes a moment of self-reflection. What kind of fan were you? Were you mad when we traded Gleyber Torres for Aroldis Chapman? Did you call for Maddon’s head after poor World Series bullpen management? Did you call on Theo to blow it up? Did you boo the Ricketts family at the Cubs convention? (Okay maybe that one is justified) Did you call Darvish a bust after an injury-plagued debut season? Were you critical of Kris Bryant’s commitment to the team?

Did you enjoy it? Did you appreciate meaningful baseball in August? Did you celebrate a playoff birth 5 times in 6 years? Did you comprehend the magnitude of defeating coaches like Bruce Bochy, Dusty Baker, Dave Roberts, and Terry Francona when it mattered most? Did you credit management for the many trade deadline risks to win another ring? Did you enjoy the development and good health of more than half of our touted prospects? Did you stop and think of all the past Cubs fans who weren’t as lucky as you?”

In my opinion, that hits the nail on the head.  All of that may not apply to the White Sox, but the one takeaway is that at the end of this run, whenever that is, it’s important to be able to say you enjoyed the ride in the moment.

A trade of a good, productive prospect hurts, of course. But, when the return is a damn good starting pitcher who boosts your rotation in a prime contention year from shaky to dependable, that’s worth it every day of the week and twice on Sundays.  This trade isn’t about what Dane Dunning turns into, it’s about what the White Sox are getting back.

Now that the White Sox are in this phase, there are going to be trades like this, and that’s ok.  While we as a fanbase are still suffering from the scars of the James Shields Fernando Tatis trade, that shouldn’t keep the front office from making aggressive moves.  Anything less would be lacking the initiative that is needed to turn a team into a winner.

When the trade deadline passed with no moves this past season, my disappointment was in the front office not making a move to bolster a team clearly on the playoff warpath.  You never know how many of those chances come along – for the White Sox, it’s historically once every 10 years on average. Now, you shouldn’t be stupid in trades, but this is far from that.

Now let’s keep the rest of the offseason rolling Rick!