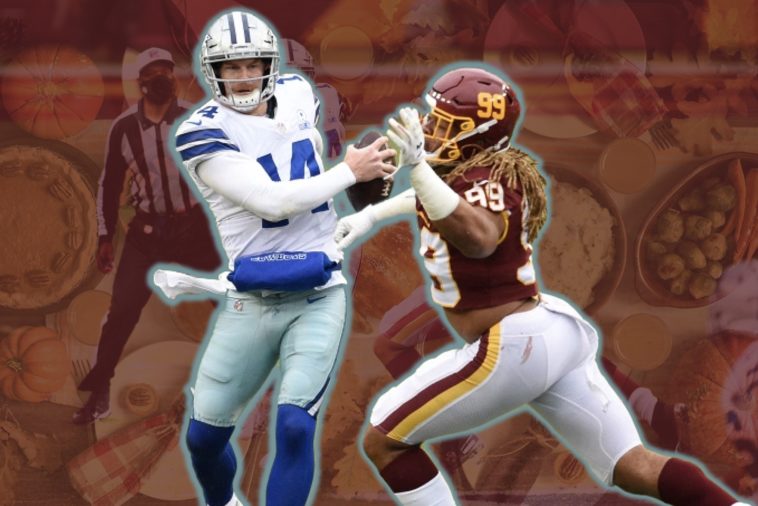 Look, Cranberries on top of Turkey is quite literally the most overrated dish in Thanksgiving. Everyone takes a very small spoon of it, puts it on the side and forgets about it. What sucks, is when you have to wash it out. If Cranberries are missing from the Thanksgiving table no one really misses it . These quarterbacks are the Cranberries of the NFL.

This is the only true cranberry sauce.

I won’t be taking questions at this time. pic.twitter.com/wU6uuF6Jq3

Good news for Nick Mullens. There is nowhere else but up from here.

It pains me that we have to have Ryan Finley here. It might be awhile before we see Joe Burrow again. But goes to show.. Protect your prized assets.

Maybe the most feel good story of 2020 is Alex Smith. First good thing to come out of the year.

Jake Luton could be done by next week. But does it matter. Him or Minshew are not the future.

Twitter told me aldis has vegan Hawaiian rolls & I can confirm that.
Thanksgiving shopping is now complete. pic.twitter.com/qEnmQK4puO

Right when you think the Vikings would turn the corner, they lose to the hapless cowboys. But can’t put all the blame on Kirk.

At least Drew Lock has swag. Not much more than that. But swag is good.

I still do not believe in Taysom Hill because he can not throw the football.

This is assuming Teddy Bridgewater is back next week.

Cam is not the answer for New England.

I can no longer defend Carson Wentz.

I do not know if the Browns can score more than 20 points in a game and that might be Baker Mayfield’s fault.

Despite being the main dish of Thanksgiving, Turkey is average. Turkey is good. But it’s everything around Turkey that makes Thanksgiving special. Plus there’s a reason we don’t want to eat Turkey all year. These are the Turkey’s of NFL quarterbacks.

Every year, the president of the United States carries out the annual Thanksgiving tradition of 'Turkey pardoning'. Here’s a look back ? pic.twitter.com/OIxUjrVk8z

Whatever. Phil Rivers is smart. Can’t throw the football but he’s smart.

Matt Stafford plays every Thanksgiving. So he belongs on the Turkey list.

In an alternative universe Matt Ryan is a top 10 QB this year.

I think Daniel Jones could be the future in New York.

I probably should have Tua lower but one bad week won’t let me punish him yet.I am in a giving mood.

Only a few more days until you get to enjoy your first Thanksgiving dinner of the season! Roasted turkey, Chef Dave's sage stuffing, mashed potatoes and gravy, and green bean casserole. Don't forget to add on a pie for dessert.
Order now at https://t.co/tBp5KKPFM8 or call 616.7 pic.twitter.com/nXbSckHJsI

Just like mashed potatoes and gravy you can tell if Jared Goff will be good from the first bite of the game.

One day Justin Herbert will go through puberty and look like an NFL QB.

Lamar is in danger of falling into the third teir of QBs.

Deshaun will be back. He’s a top 10 QB but this is power rankings.

Despite the loss to the Chiefs, Carr looked like a franchise QB.

These night games for Tampa Bay and Brady are definitely past his bedtime.

If I told you Josh Allen would be the best QB out of Baker Mayfield, Sam Darnold and Lamar Jackson’s draft class.. What would you have said?

Not sure if he belongs here but the Steelers are undefeated.

For my Micro Thanksgiving this year (4 people!), I’m making my Herb & Apple Bread Pudding. Instead of stuffing the turkey which can dry it out, this savory bread pudding bakes separately but has all the flavor of traditional stuffing! https://t.co/NiXooWjeIo pic.twitter.com/WjCtksKlut

I think Aaron Rodgers will retire with one Super Bowl title. It’s a shame.

Kyler Murray will be a problem for years to come. And he stuffs the stat sheet (see what I did there).

Russell Wilson might not receive an MVP vote this year again, despite that, he’s been an absolute baller all year.

Was there any doubt Mahomes and the Chiefs would score on that last drive? I say no.