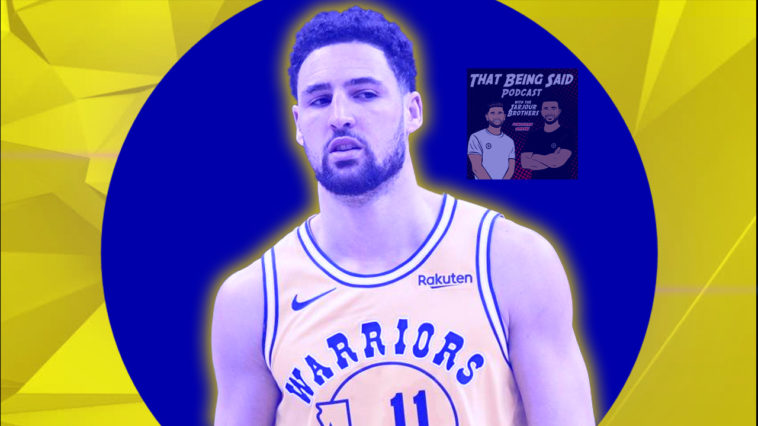 Golden State Warriors star guard Klay Thompson has suffered a season-ending tear to his right Achilles tendon. The injury occurred during a workout Wednesday in Southern California, the team announced. He had an MRI on Thursday morning. Unfortunately, we didn’t start by talking the NBA Draft, because Klay Thompson will miss another season now with a torn Achilles… What a somber day for the Warriors after drafting 2nd in the Draft. With that said, George & Sami of That Being Said Pod are back for Episode 679 of That Being Said Podcast… We talked Klay Thompson, NBA Draft, NFL Week 11 and then we went on to our tweets. Subway or Quiznos? Family Guy or Simpsons?

Tweets of the Day:

The Quiznos Spongmonkeys: Our scientists were so preoccupied with whether or not they could, they didn’t stop to think if they should. pic.twitter.com/DHZat6VCXx

Im glad Quiznos is trending. We can finally admit they are 10x better than subway and you all know it.

Ladies and Gentlemen – the Christmas tree has arrived at Rockefeller Center in NYC. Left pic is how it looked when it was cut down. Right pic is how it arrived.
Welcome to 2020. pic.twitter.com/bKSq87BVP1

New seasons of Spongebob are absolute garbage, the show went downhill after season 3.

The Fresh Prince reunion trailer got everyone in their feels ??pic.twitter.com/eQHHxuTwis

Lie again! Do you see this comb over on an off day? ELITE! https://t.co/OB0KDbVenC pic.twitter.com/MZ0fWR9CQY