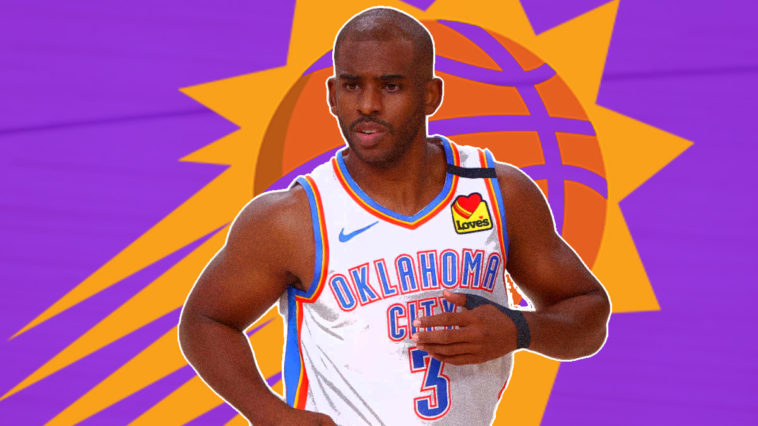 Here is the raw truth, not many NBA teams improve long term by trading for a 35-year-old Chris Paul, due to make $85 million over the next two seasons. But the Phoenix Suns reportedly are intrigued about acquiring Thunder point guard Chris Paul, and it might work out just perfect.

To make the money work, it likely would include the Suns sending Rubio and wing Kelly Oubre Jr. to Oklahoma City.

The Oklahoma City Thunder were kind of in a rebuilding year in 2020, but ended up making the playoffs as a 5th seed with Chris Paul, and due to CP3 and his great season, but it might be time to back away from that and get on the rebuild continued with youth.

…starting 5 would be pretty entertaining to watch.

The Suns would send Ricky Rubio, Kelly Oubre, Mikal Bridges and Cameron Johnson to Phoenix. Three young players and an experienced point guard in Ricky Rubio. The Thunder would get CP3 to make a Big 3 with Devin Booker and Deandre Ayton in Arizona. They have players that are still developing their game like Kelly Oubre, as well as the 10th overall pick this year. This move could also be helpful for them in the long term.

“The Suns have been given permission to speak w/ Chris Paul.. I know Chris Paul has interest in the Suns.” – @WindhorstESPN on @Bickley_Marotta pic.twitter.com/3B8wxuU1TR

This would be a perfect fit! ? pic.twitter.com/p1Cc3vrDFn

Chris Paul wants to be in Phoenix. He wants to be close to home and loves the idea of playing with Devin Booker.