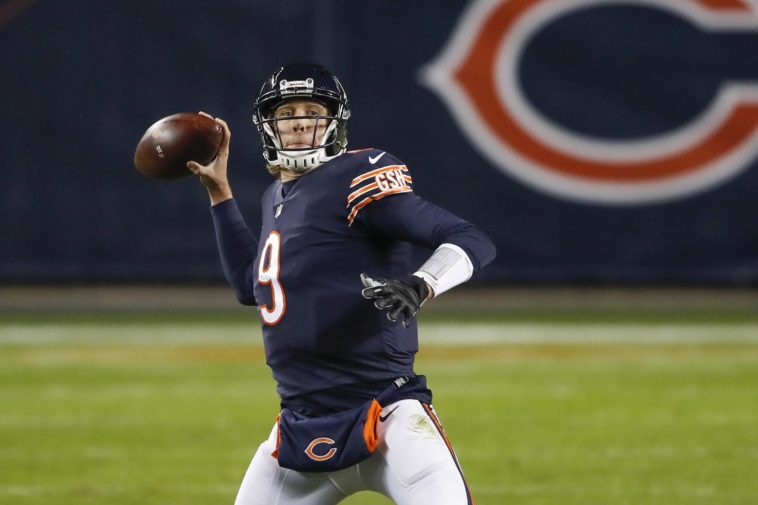 Congrats, Bears fans!We have made it to the halfway point of the season and somehow the Chicago Bears are 5-3. It could have gone a lot better but for what it’s worth, there are some positives sprinkled in with all the negativity. As we enter into the back half of the NFL season, it’s time to dish out some midseason grades for key positions as well as midseason awards. Whether it is the best catch or the hardest hit, we have an award for that. So without further delay, let’s get started with the grading.

Talk about uncertainty. This situation has been the epitome of it. You never know what’s going to happen from one week to the next and at best, we squeak by with a comeback win or unnecessarily close game.

We can’t talk about the QB situation without mentioning Mitchell Trubisky. While Nick Foles has struggled mightily over the past few weeks, people have began clamoring for #10 to get back in the huddle. While the frustrations are understandable, he was having his own struggles as well. For the foreseeable future, this is Foles’ team.

This is a very tough position to grade. As the offensive line goes, so does the running game. It may seem as if David Montgomery has had it pretty rough. However, he is averaging more yards per carry so far this season than he was in 2019. Surprising, right?

Losing Tarik Cohen has been brutal. He opens up a huge portion of the playbook to Nick Foles and him going down with the ACL injury has definitely proven to be a huge loss. Cordarrelle Patterson has been streaky at best in the run game but at this point I’ll give him a break. It’s just not his speciality.

As the lone beacon of hope on this offense, guys like Allen Robinson, Darnell Mooney, and at times Anthony Miller, our wide receivers have provided a much needed foundation for this team. The only reason they aren’t graded higher is some of the drops.

While some of the blame could be placed at the feet of Trubisky and Foles, it is a problem that exists and has hurt us at times. Nevertheless, Robinson has been stellar and every bit deserving of an extension. The emergence of rookie Darnell Mooney has been comforting for fans and while Anthony Miller has struggled at times, he seems to make a big play when we need him most.

We have seen flashes of good coupled with periodical incompetence. Cole Kmet needs more touches if he is expected to be our true #1 of the future. He has the ability and the right personality for the team.

Jimmy Graham has got to be on the field in redzone situations. I can not stress that enough. My main criticism of Graham is his often noticable  lack of continuation on routes. He’s got to clean it up and keep moving.

Sigh. This has been absolutely the most disappointing piece of our offense. You know it, I know it, and the world knows it. Imagine a piece of swiss cheese. Now imagine it being 5 yards away from you, running in the opposite direction for some reason.

Yeah, that’s what we’ve dealt with these last few weeks and my voice still hasn’t recovered from yelling at Charles Leno Jr. and Rashaad Coward. James Daniels was our only true lineman that had the ability to block. Yep, he is out for the season.

This is where the monsters play. Our defensive line has been built to withstand some difficult challenges. Whether is it holding an offense to 3 points on the goal line or a huge sack on a critical 3rd down, this line is built for it.

Guys like Akiem Hicks, Bilal Nichols, and Roy Robertson-Harris simply get after the QB. They are growling, snarling, and intimidating all that stand in front of them. All the while, the depth of Mario Edwards Jr. and Brent Urban have proven to be crucial at times as they have each made some huge plays.

With 6.5 sacks and consistent pressure, Khalil Mack has gotten back to his true form despite dealing with back pain all season. Then you have Roquan Smith who is playing like a star. This kid is in the top five of almost every statistical category for a linebacker. If he isn’t selected to the Pro Bowl, it would be a massive snub.

Perhaps the addition of Robert Quinn has had more of an impact than we think? Also, with Danny Trevathan finding his groove these past few weeks, it’s safe to say this is one of the top LB corps in the league.

This has got to be the security blanket for us fans. The talent and depth shines in our secondary and provides a much need level of comfort against even some of the best QBs in the league. Fronted by stars like Eddie Jackson and Kyle Fuller, while backed up with guys like Jaylon Johnson and Tashaun Gipson Sr., we have the ability lock up an offense and allow our front 7 to get after it.

We may give up a deep pass here or there but that is the risk that comes with being a greedy defense. Fuller is always looking to dislodge a ball or collarbone and Eddie is always thinking endzone. The rise of rookie Jaylong Johnson has solidified what is expected to be a strength of our team for years to come.

Ladies and gentlemen, we have a kicker. Send my regards to Eddy Pineiro but Cario Santos is the guy. Santos has been solid. Real solid. So much so that he has even won an NFC Special Teams Player of the Week. I dig it.

Our return game has been decent if you only count kick returns by Cordarrelle Patterson. If you factor in anything by the now released Ted Ginn Jr., you have the stuff of nightmares. While not given too many opportunities as of yet, at least the recently signed Dwayne Harris catches the punt. That alone took this grade from a C to a C+.

Now let’s move on to the exciting part. It’s time for the midseason award.

The award for the biggest surprise goes to Jimmy Graham.

Hear me out on this one before you start talking about his random route running or stats. Graham has been a force in the endzone when he is actually on the field. I’ll never understand why Nagy has him on the sidelines while within striking distance.

The award for the most underrated goes to Tarik Cohen.

What better time to appreciate Cohen than when we don’t have him? I know I’m not alone in recognizing what this team lacks with him out for the season with an ACL injury. Those RB screens behind the line of scrimmage just aren’t the same these days.

Often criticized for his attraction to the sidelines in 2019, Tarik was certainly looking like he was more determined to get downhill this year. His presence on the field and in the locker room is certainly missed by fans and teammates alike.

The award for the most improved goes to Buster Skrine.

With a secondary packed with the likes of guys such as Kyle Fuller and Eddie Jackson, it’s nice to have depth. Halfway through this season, Buster is only 10 tackles away from surpassing his 2019 total.

Complimented by the aforementioned Fuller/Jackson duo, Skrine has had his fair share of chances at making plays across the middle of the field. So far, so good. He is a couple of interceptions away from having a really solid season.

The award for best hit goes to Kyle Fuller.

This should come as no surprise whatsoever. Kyle Fuller is a sledgehammer. While falling victim to some questionable calls this year, Fuller has been laying the boom all season. The best of which being the forced fumble against Tampa Bay running back Ke’Shawn Vaughn.

The ability to change the course of that game was a thing of beauty. Expect no changes in his hard-hitting style as both fans and coaches have encouraged him to stay true to himself.

The award for best catch goes to Allen Robinson.

Pick any Allen Robinson catch so far this season. Got it? Great. I’d believe almost any argument you have as to why it’s his best this season. They all seem to be not only crucial, but spectacular.

For the sake of argument, let’s go ahead and pick one. I’ll say week 1 versus the Detroit Lions. A beautiful 22 yard diving catch to pick up the first and essentially start the miraculous Bears comeback win.

The award for the smartest play goes to Nick Foles.

Facing a 2nd & 11 with under two minutes left in the game, Foles called the now infamous “rub rub” audible, setting up David Montgomery to not only get the first down but also putting the Bears in position for a game winning 38 yard field goal by Cario Santos.

Allen Robinson knew exactly what Foles was trying to do and set a beautiful pick on Shaquil Barrett. This allowed Montgomery to slip past the defenders for a game changing catch down the sidelines. With intelligence on display from several players, none of it would have been possible without the call from #9.

There you have it, folks. Grades and awards as I see fit. As the second half of the season begins, it’s time for the Chicago Bears to find their groove offensively and prove they have what it takes to be a contender. If we have any hopes of reaching the promised land, it starts with consistency. Choppy play, questionable calls, and injuries have plagued this team. It’s time to put that behind us and finish this season with heads held high. C’mon, Chicago… We have your back.