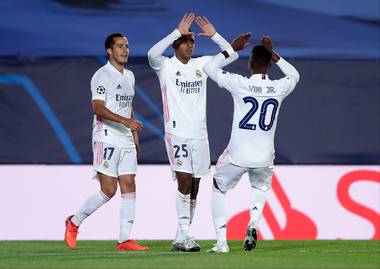 Real Madrid earned a vital 3 points in the Champions League, beating Inter Milan 3-2.  This was a must win for both sides, and it showed during the 90 minutes.  This was an extremely entertaining game of football.

Los Blancos started the game very well with 2 goals.  Benzema was alert to former Madrid player Archaf Hakimi’s mistake, and was able to slot away the first goal.  Sergio Ramos added the second a few minutes later from Kroos’ corner.  This was Ramos’ 100th goal in a Madrid shirt.  At this point, there is little doubt left in regards to the Captain’s legacy.  He is one of the 3 greatest players in the history of Real Madrid, Furthermore, he shows zero signs of slowing down.

Inter responded immediately with a gorgeous team goal, and added a second at the 69th minute.  Both goals were very well taken, and as a whole, this game was extremely wide open.  Madrid were on their heels for much of the game.

Courtois could not do much about the two goals he let in, and it is clear that he needs the back four to firm up.  Casemiro had a terrible game overall, although he had a vital block towards the end as Inter pushed for an equalizer.  Asensio continues to look below par, and he may lose a spot to Rodrygo.  Valverde was all over the pitch, and is clearly back to his peak form from last year.  Hazard continues to be a work in progress, but he is getting better with each 60 minute shift.

Vasquez put in another great game at right back.  He received multiple long ball passes with perfection. Mendy continues to impress, and his strength on the ball is impressive.  A quick shoutout to super sub Luka Modric.  His calm on the ball when surrounded by opponents, is sublime.

Madrid must use this momentum towards another win this weekend in the league versus Valencia.  Madrid now sit level with Shakhtar at 4 points in the group.  Borussia Mönchengladbach.are in first with 5 points and Inter are in last with only 1 point.