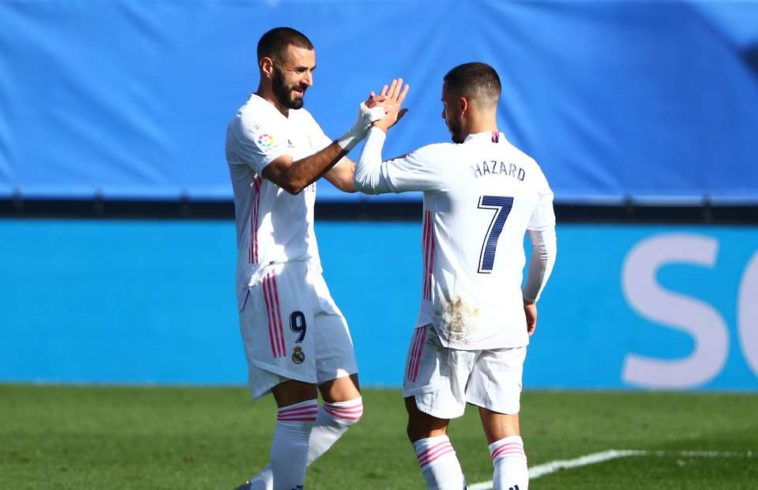 Real Madrid won their second league match in a row by defeating Huesca 4-1.  It was not a perfect performance from Los Blancos, but there are a ton of positives to take away.

It was slightly concerning to see Madrid’s defense slip so often against the Huesca attack.  MIlitao struggled with the pace of the opposing attack, and has looked shaky overall this season when he gets the starting nod.  Marcelo continues to be a massive liability in defense, and is now clearly the second choice to Mendy. Asensio plays well within the team, but he is yet to reach top goal scoring form.  He continues to get the nod from Zidane for the time being.  Isco came in as a sub, and showed some nice skill on the ball.  He seems to be on the decline and may leave the team at the end of the season.

Regardless of the early struggles in Europe, Madrid are building in the right direction in the Spanish league.  They currently trail Real Sociedad by 1 point with a game in hand (Athletico trail by 3 with 2 games in hand).  Madrid’s Clasico win, coupled with their strong second half Borussia Mönchengladbach and win this weekend, has the club feeling like they finally have some momentum.  It was great to see 4 goals on the scoresheet, particularly given the team’s offensive struggles the past 12 months.  If Madrid score 4 goals a game, they will never drop points to anyone.  Benzema played a brilliant game all around, and was able to get on the scoresheet twice (should of had been at least one more goal).

Valverde is coming back into the form he showed last year, and scored from an unstoppable low shot.  Modric played the full 90 minutes and shows no real signs of decline.  Casemiro was the midfield rock he always is, and Kroos came into the game as a sub and played well too.  With these four guys in the midfield, Zidane can give his players the necessary rest to keep the midfield fresh.

Lucas Vasquez is doing as well as he can while filling in for the injured Carvajal along the back line.  Vasquez is a constant grinder in defense and can deliver some pearls into the box.  It will certainly be a massive upgrade when Dani returns, but credit Lucas for stepping up and helping the team during the early part of the season.

Undoubtedly the most exciting part of the Huesca match was the performance of Eden Hazard.  The Belgian looked extremely sharp on the ball.  He linked well with Benzema, and he scored an absolutely stunning strike from 35 yards out.  Madrid began the game a bit sluggish, and it wasn’t until Hazard’s stunning hit that Madrid came to life.  If he can stay healthy, Hazard will be the best player in Spain (yes, I am aware of the Argentine magician on Barca).  His skill, movement, and vision are unmatched.  He is world class, and he is integral to Madrid’s league hopes and going deep in the Champions League.