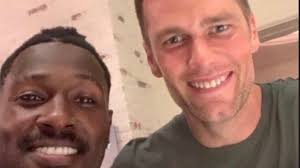 It’s no secret that Tom Brady wanted Antonio Brown to join the Tampa Bay Buccaneers. How far is Tom Brady willing to go to vouch for the controversial Wide Reciever? Far enough to even let him live with him during the season to make sure he stays out of trouble and follows COVID protocols.

Sources told Jason La Confora of CBS sports that Brown would be living with Brady for at least part of the seaosn.

Antonio Brown has been staying with Tom Brady at the house he's renting from Derek Jeter, via @JayGlazer https://t.co/ZkNQPKj7lJ

How cool would it be to actually have camera here and a reality show? Brady and Brown don’t seem to be the most similar two people but at the end of the day what is in common? They both want to win, and they are both willing to go to great lenghts to do it.