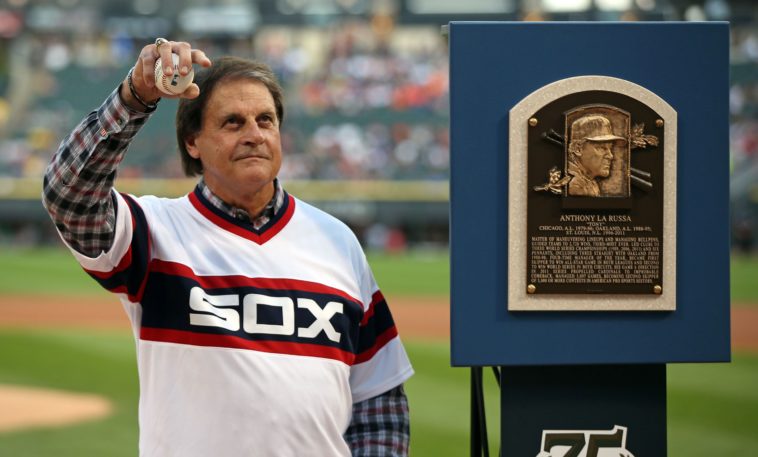 After a few speaks of speculation, dread, hope, and every other emotion imaginable, the White Sox did the (originally) unthinkable and certainly improbable Thursday afternoon.  17 days after firing Ricky Renteria, the White Sox had their pick for the next manager.  It wasn’t AJ Hinch, it wasn’t Alex Cora, it wasn’t Bruce Bochy, or AJ Pierzynski, or anyone initially on the list.

Just like that, two-ish weeks after the initial mention of him was thought to be smokescreen, Tony La Russa was coming home to the South Side of Chicago.  And like a modern day Nero, Jerry Reinsdorf played his fiddle as White Sox Twitter burned.

Tony La Russa, a member of baseball’s Hall of Fame, the third-winningest manager in baseball history, a three-time World Series champion and a four-time winner of the Manager of the Year Award, has been named the new manager of the Chicago White Sox. pic.twitter.com/RKP24rleHP

There’s really no way around this selection: it was unconventional, it was out of left field, and it most certainly was not Rick Hahn’s.  Looking at this hire and how it played out over the last several weeks it is incredibly clear this was a hire pushed by Chairman Reinsdorf.

The hiring of Tony La Russa has ruffled feathers in the White Sox organization. A number of employees have concerns about his ability to connect with younger players and how he will adapt to the field after being away 9 years.

This was a Jerry Reinsdorf decision. Simple as that.

Instead of reacting right away, I took some time to think this through a bit more, which certainly calmed my initial reaction.  While not the pick I wanted, Tony La Russa does not come without his benefits.

Because it’s the easiest way to write this, I’ll start with my perceived positives. And yes, there are several of those.  Lest we forget, the last time Tony La Russa stepped out of a dugout, this was the result.

Tony La Russa and Albert Pujols take their celebration to the set of 'MLB Tonight' in St. Louis. pic.twitter.com/mi8r16gK

The way I see it, from a pure baseball standpoint, this move makes sense.  After the crucifixion of Ricky Renteria during the last week of the regular season, it would be impossible to argue the White Sox are not getting an X’s and O’s upgrade in La Russa.  After all the man is a Hall of Famer, three time World Champion, four time Manager of the Year, and only two managers in the 151 year history of Major League Baseball have won more games than him.

Those are numbers that can’t be argued.  When the only guys you trail in wins are two of the most legendary managers in the history of the sport, including Mack who managed for literally half a century, you know how to do the job.

Most wins as manager in MLB history

Say what you will about his ability to adapt to modern analytics, but one thing is for certain – Tony La Russa has a track record that shows he’s a cutting edge thinker when it comes to the game of baseball.  While the style of pre-modern lefty-righty-lefty bullpen-ing he helped establish may not be current best practice, or even allowed, the point is that he was ahead of his time in the use of specialized relievers.

I would have a hard time believing that adapting to a three batter minimum rule would be a difficult concept for La Russa to grasp.  After all, you don’t manage in five (soon to be six) different decades without having the ability to adapt your strategy and style to the demands of the day.

After his time in the front office and based on his comments in the introductory press conference, I don’t think this will be as difficult a transition as some do.

La Russa talking about observational analytics, watching the game and figuring out how to put a player in position to succeed and win.

How he builds out a coaching staff will also play a large, important role, so if Dave Duncan and the old band come all trotting out in Arizona in February I have the right to revise this statement.

My point is, looking at his birth certificate as a hit against his ability to adapt and/or incorporate analytics is a lazy narrative that doesn’t look at his track record.  Tony La Russa, from an X’s and O’s standpoint, is an upgrade over Ricky Renteria.  How much that matters in modern baseball is a different discussion, but it still is an objective fact.

On the other hand, this signing obviously comes with concerns.  I’m not going to get into the whole “Can a 76 year old do this job?” because, well, there’s no way of knowing for certain, and, again, it’s a lazy narrative.

A fair criticism is how he will fit with this team, something that has been well documented and voiced by the fanbase.  Mixing an old school manager with a young, “Change The Game” minded team is a potentially explosive mix that can’t be ignored.  Him describing Fernando Tatis Jr.’s 3-0 Grand Slam  as “unsportsmanlike” stands in pretty steep contrast from how this White Sox team, Tim Anderson in particular, operates.

Of all the concerns regarding this hiring, this is easily the most potentially fatal, one that could alter the identity of the team.  If La Russa can mold his style to fit the flair of this group, this team will be in a better place to succeed.  If not, there will be problems, that is certain.

Then there’s the question of protest, particularly with the National Anthem and his strong criticism for Colin Kaepernick from 2016.  I am of the belief that people reforming their opinion after honest discussions with others is a positive, so I certainly hope Tony is utilizing the buzzword from his press conference and is sincere when he says his view has changed. If not, his relationship with the team will certainly be contentious from the start.

This comment from Bruce Maxwell certainly lends some optimism.

LaRussa is a SOLID man that made time to meet me personally in 2018 when everyone in baseball turned their back. I was so nervous. But we talked over an hour & I will never forget him extending his support to get me back in the game. And he did! @whitesox made a GREAT choice! https://t.co/oeGK6UCzQa

The remaining negatives are around the classic White Sox lack of a formal search to find a manager, something that has come back to bite them, and also something out of La Russa’s control.  Taking away your GM’s right to hand pick his guy is also not something I would have done, but this is a Reinsdorf organization after all.

Of course, longevity is another question, but this can be played well – if the Sox hire a young up and comer to be bench coach for a few years and learn the ropes under La Russa, the transition to keep a sustained winner can be done smoothly.  A tightrope that could fail, yes, but it can be done.

Ultimately, what this hiring is going to come down to is one thing – winning a title.  If La Russa wins, it’s a shrewd move that used a proven winner to help take this franchise to the next level, before handing the reins off to a manager in waiting.  If Tony’s Sox fizzle out, it’s every Reinsdorf hater’s wet dream.

I don’t hate it, I don’t love it.  It’s not the move I would’ve made, but it’s an upgrade on the field. Off the field, who knows at this point.  Only time will tell, and I’m willing to see how this plays out.  I just waited 12 years to see a playoff game, after all.