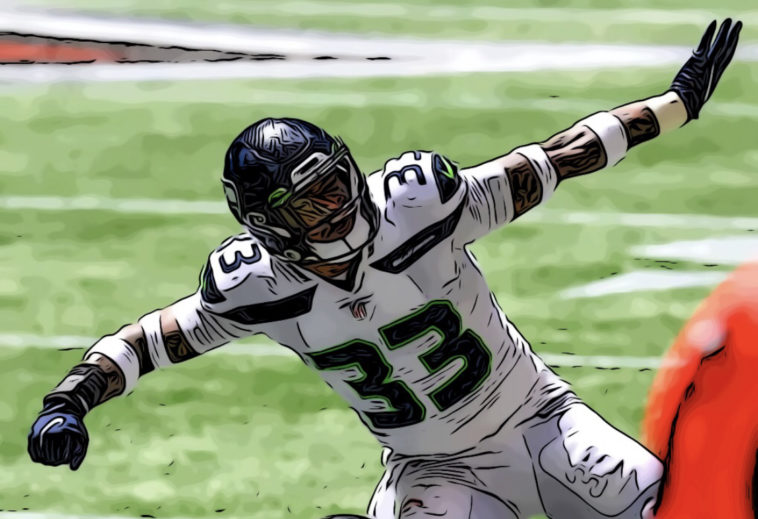 If there was ever an indication the Seahawks required help defensively, it was Sunday night.  The Seahawks defense has struggled to sustain leads all season.  It took a goal line stand as time expired to beat Cam Newton and the Patriots in a week 2 shootout after Cam drove his team 80 yards downfield with ease in the final two minutes of regulation.  In week 3 vs Dallas, Seattle watched a 30-15 third quarter lead evaporate and become a 31-30 fourth quarter deficit.  On the Seahawks final possession Russell Wilson found star receiver DK Metcalf in the end zone with 1:47 remaining, then converted a two point conversion.  38-31. Again, no lead is safe.  Dak Prescott would proceed to drive Dallas into Seahawks territory and suddenly a reenactment of week 2’s closing seconds appeared to be looming until Prescott hurled a 50/50 ball into the back of the end zone.  Seahawks backup safety Ryan Neal, who had replaced Jamal Adams after he left the game with an aggravated groin, picked it off to push the Hawks to 3-0.  Even week 4 in Miami the Seahawks were forced to recover an onside kick to seal the victory after moving ahead 31-15 late in the fourth.  And we cannot forget that we were a fourth and inches conversion away from falling to the winless Vikings at home on Sunday Night Football in week 5.  Which brings us to this past Sunday.

Upon the signing of Jamal Adams, fans in Seattle erupted and glorified the possibility of a L.O.B. 2.0 containing the likes of Pro Bowler Shaquille Griffin, newcomer Quinton Dunbar who had been ranked as the number two corner by PFF in 2019, Quandre Diggs who made a huge impact after being traded for in 2019, and our new All-Pro, Jamal Adams.  Jamal Adams’ style of play somewhat resembling that of Seattle fan favorite Kam Chancellor’s also likely contributed to the hype.  But as Clowney signed with Tennessee and no big additions were made along the defensive line the question remained; how would Pete Carroll’s defense apply pressure?  Through six weeks that question had not been answered.

Entering Sunday Night’s contest in the desert Seattle ranked 21st in sacks (9), 18th in points allowed (27 per game), and 32nd in total defense (471.2 yards per game).  For context, the next closest is Atlanta who is allowing 425.9 yards per game (432.5 prior to Sunday).  The four teams ranked directly ahead of Seattle in total defense, Minnesota (28th), Houston (29th), Jacksonville (30th), and Atlanta (31st), have a combined record of 4-23 this season.  The Seahawks were 5-0 before Sunday’s game.  Jamal Adams remains tied with Benson Mayowa for the team lead in sacks with two.  He has not played since week 3.  It was apparent John Schneider and Pete Carroll were acknowledging the pressure being put on the secondary with the lack of pressure being applied up front as they signed free agent Damon Harrison.  However, the former All-Pro was kept on the practice squad as the team headed south looking to advance to 6-0 for the first time in the franchise’s history.

Seattle’ defensive woes finally caught up to them Sunday.  In what seemed to be another typical wildly unpredictable and unusual Seahawks game, Carroll’s squad held a ten point lead entering the half.  Prior to Sunday, Pete Carroll and Russell Wilson had an astonishing 59-0 record when leading by four or more points at the half.  So if you’re a Seahawks fan you’re feeling pretty confident, right?  Well, after a slow start to the second half Kyler Murray would run one in from five yards out to cut the lead to three with just under three minutes to play in the third quarter.  But Russell would respond in the fourth, lofting a beautiful arching ball to Tyler Lockett in the back of the end zone on a huge fourth down play.  Lockett executed the gorgeous toe-tap and Seattle led 34-24 with under seven minutes to play.

Now as previously stated, the Seahawks have struggled sustaining leads all year.  But the Seahawks had a 95% win probability according to ESPN next gen stats up ten with 6:44 to play and Russell Wilson still likely to get the ball back.  The Cardinals took over at their own 25 and moved the ball into Seahawks territory.  Nobody who has been paying attention this year was surprised.  But after a third down stop, Arizona was forced to settle for a 52 yard field goal attempt with only 3:02 left.  Zane Gonzalez nailed the kick, however an unsportsmanlike penalty on Benson Mayowa would hand Murray and the Cardinals offense a fresh set of downs at Seattle’s 19 yard line.  Two plays later, Murray connected with Christian Kirk for a score and the lead was once again cut to three.  Attempting to run out the clock with leading rusher Chris Carson watching injured from the sidelines, the Seahawks would lean on Carlos Hyde in order to try and seal this one.  However after failing to convert on a third and two, Seattle was forced to punt, giving Kyler Murray one more shot with 52 seconds and no timeouts.

Kyler Murray really had a smile on his face when he saw DeAndre Hopkins downfield 1 on 1 ? ? @OnTapNFL @K1 #RedSea pic.twitter.com/EeDP3ANyQ7

This is the point of the game you need a pass rush.  One of the factors contributing to the Seahawks defense allowing such an abundance of yardage is that they are ahead in the majority of the games they play.  Opposing teams rarely have an opportunity to establish the run as they are forced to throw the ball out of necessity as they attempt to keep up with Russell Wilson and the Seahawks prolific offense.  The problem Seattle faces in these situations is when teams are forced to chuck the rock Carroll’s defense lacks the personnel required to make opposing quarterbacks uncomfortable.  Instead of hurrying their throws or being forced to scramble out of the pocket, opposing quarterbacks have been able to sit in the pocket, make their reads, and successfully find open targets downfield with regularity.  Seattle is allowing a league worst 369 passing yards per game against them.  Compare that to their run defense which is ranked 13th in the league, giving up 110.5 a game.  Still not great, but nowhere near the league worst.  Kansas City faced a similar predicament when Patrick Mahomes burst onto the scene in 2018.  Leading in the majority of their games thanks to their dynamic offense opposing teams were forced to throw on them in order to keep pace.  But the Chiefs’ lack of pass rush in those situations allowed opposing quarterbacks to feel comfortable in the pocket, similarly to the Seahawks.  In the end, Kansas City’s defense became their downfall as Tom Brady and the Patriots would beat them in Arrowhead in the AFC championship 37-31.  The following season the Chiefs would add Frank Clark and Tyrann Mathieu to solidify their pass rush and defense as a whole and would eventually move on to win Super Bowl LIV 31-20 over the San Francisco 49ers.  Point being, when you put teams in situations where they are forced to throw the ball it is unrealistic to rely solely on your secondary to keep the pass game in check.  Allowing NFL quarterbacks 3-5 seconds to throw the ball every play is not a recipe for success.

The Seahawks needed one more stop Sunday night.  Starting at his own 20 yard line, Kyler needed to get Arizona into field goal range with only 52 seconds remaining and no timeouts.  In four plays, not including Murray’s spikes to stop the clock, Arizona moved the ball 54 yards getting down to Seattle’s 26 with 17 to play.  Zane Gonzalez tied the game and the Seahawks would go on to lose in devastating fashion in overtime.  A Seahawks defense that had been reliant on clutch late game stops all season failed to make another as their division rivals handed them their first loss on the year.  Kyler Murray threw for 360 yards (actually under Seattle’s average for passing yards allowed per game) and was not sacked once.  Murray wasn’t even pressured as the Seahawks pass rush failed to produce a single quarterback hit throughout the games entirety.  Tough to win games that way, and amazingly the Seahawks were in a position to win it until the very end.  A testament to how good this team truly could be if they were able to apply a little bit of pressure.

Enter Carlos Dunlap, Damon “Snacks” Harrison, and Jamal Adams.  No longer able to ignore the concerns raised by the team’s weak pass rush, John Schneider made a splash Wednesday trading BJ Finney and a seventh round pick to Cincinnati for two time pro bowler Carlos Dunlap.  Dunlap, who requested a trade Sunday after the Bengals lost a heartbreaker to the Browns in the game’s final moments, ranked as the number three defensive end in the league last season according to PFF based on his performance vs both the run and the pass.  He will undoubtedly be a welcome addition to a team desperate to generate any sort of pass rush.  Another recent addition yet to make his Seahawks debut is the former All-Pro nose tackle Damon Harrison.  Though “Snacks” as he is known is not notorious for registering sacks, his athleticism combined with his size make him a difficult matchup for any o-line.  In his prime Harrison was an elite run stopper, and successfully stopping the run is going to prove to be pivotal down the stretch in a division containing three of the league’s top ten rushing attacks (AZ: 2, LAR: 7, SF: 8). Five of Seattle’s final ten games come against division foes and they are hopeful Harrison’s presence can give them an edge in a loaded NFC West.  One aspect of Seattle’s defensive struggles that may be getting overlooked is the fact they have been playing without Jamal Adams since the All-Pro safety aggravated his groin in Week 3 against Dallas. Adams made an immediate impact in Seattle recording 23 tackles, 3 TFL’s, and 2 sacks in his first three games.  Unfortunately, the aforementioned groin injury caused him to exit the Dallas game in the fourth quarter.  After managing to win in weeks 4 and 5 without their coveted offseason acquisition, Seattle’s defense was unable to slow down Arizona’s young offense on Sunday Night Football allowing 159 yards on the ground and 360 more in the air as they dropped to 5-1.  But with Adams moving closer to a return and the additions of Dunlap and Harrison up front, there is reason for Seahawks fans to be optimistic that this group can turn things around as they look to make a Super Bowl run as we enter the second half of the season.

Yeah I remember when Carlos Dunlap really disrupted the #Seahawks last year in week 1. @Carlos_Dunlap in on our side now ? pic.twitter.com/rKstom2IBk