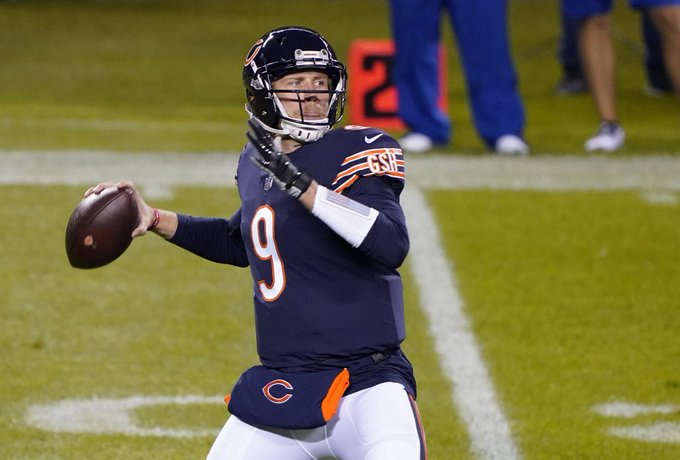 The Chicago Bears (5-1) are set to face off against the Los Angeles Rams (4-2) this Monday night in a battle that may already have playoff implications on the line.

This interview from Nick Foles after the game ? pic.twitter.com/Z9Pmm6JBPu

Chicago is coming off it’s best game of the season. It seems as if the Monsters of the Midway have been revived after an absolutely dominant defensive performance against the Carolina Panthers, who were riding a 3 game win streak. With the Bears defense firing on all cylinders right now, the Rams might be justified in having flashbacks of 2018. However, just like that matchup two years ago, the Bears are still struggling offensively.

This Chicago offense is currently ranked 28th in yards per game and 27th in points per game. While scoring when absolutely necessary, this team needs to put together a solid game on the offensive side of the ball in order to reach their full potential of being a legitimate contender.

The Rams have had success this season rushing the ball and you can expect them to do just that against a Chicago team that has given up some explosive plays on the ground. Los Angeles is currently ranked 10th in rushing yards per game with a 135.2 average. Expect the Rams to try and get things going with a heavy dose of Darrell Henderson Jr. and Malcom Brown early in the game to try and open up big plays down the field.

The key word there is “try”.

The Bears secondary has been playing at an unbelievable level and they have no plans of easing off now. Currently ranked #1 in opposing QB completion percentage, Chicago is making a statement. Kyle Fuller IS an All-Pro. Eddie Jackson has less balls thrown his way than the pretty girl in a dodgeball match. The name “Jaylon Johnson” has been tossed into talks of DROY. All that without mentioning Buster Skrine, Tashaun Gipson, or DeAndre Houston-Carson; guys that have all had big moments this season.

If Jared Goff has any plans of an air attack, he will have to take into consideration the inherent risk that comes with it. Luckily, for them, they have Cooper Kupp and Robert Woods to ease some of those concerns. Both targets are averaging over 12 yards per catch and both have excelled at gaining yards after catch (YAC). Kupp is currently ranked at #6 in YAC with 231 yards while Woods is ranked 11th with 199 yards.

In order for the Bears to slow the Los Angeles receiving tandem down, they must continue to get after the quarterback. Khalil Mack currently leads the team with 4.5 sacks. Akiem Hicks isn’t far behind with 3.5 takedowns of his own. However, the contributions by players such as Balil Nichols, Brent Urban, Mario Edwards Jr. and others have proven to be particularly helpful as of late.

Nick Foles will have his hands full as well because Los Angeles boasts plenty of its own defensive threats. Players Aaron Donald and Jalen Ramsey. Also, we shouldn’t forget that Leonard Floyd revenge game narrative. The Rams currently rank 7th in points allowed, 5th in sacks, and 8th in passing TDs allowed. In other words, a low scoring affair between these two teams should be expected.

As Monday approaches, a primetime matchup between two NFC powerhouses has all the makings of a make-or-break situation for both teams. Look for these defenses to try and carry the load and solidify themselves as Superbowl caliber while a battle between two offensive masterminds is waged on the sidelines.