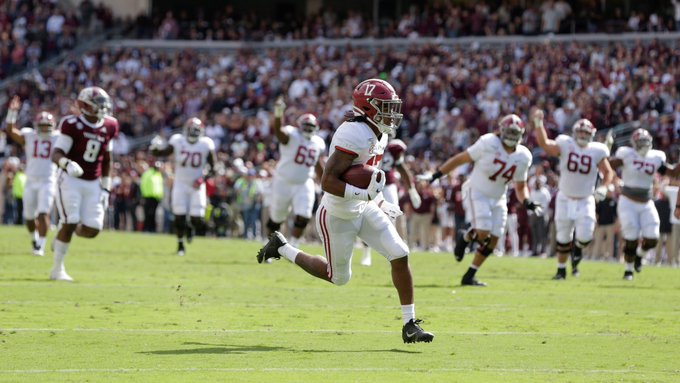 Alabama Crimson Tide wide reciever Jaylen Waddle is going to be out for the year with an ankle injury suffered on the opening kick off against Tennessee. Waddle left the game to go to the hospital and was in obvious pain. He was taken to the hospital. Waddle is a projected to be a top 10 pick in the NFL draft this upcoming spring.

Nick Saban announces Jaylen Waddle is out for the year. Tough loss for #Alabama ? @OnTapNFL pic.twitter.com/i6FJeuNwuR

Sending positive vibes to Jaylen Waddle. One of the best players in the nation. Hope this isn't a long term injury. pic.twitter.com/yiE2jWhmMW

Alabama’s head coach Nick Saban announced at halftime that Waddle would indeed miss the rest of the season:

Nick Saban tells @JamieErdahl that Jaylen Waddle will be out for the year after injury vs. Tennessee. pic.twitter.com/HYcExcqayo