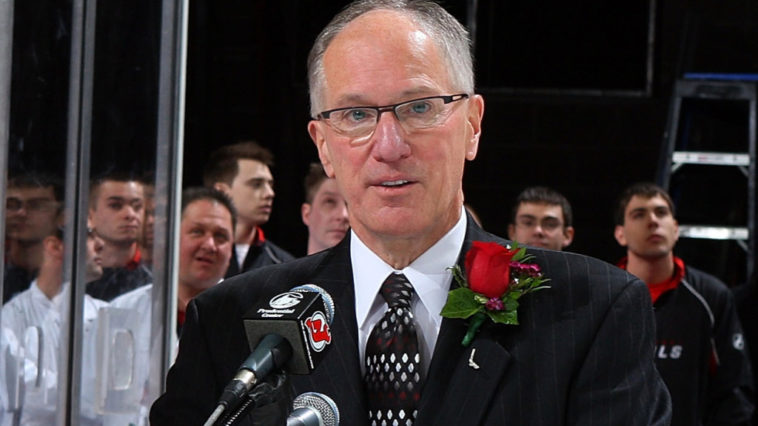 It was not news I was hoping or expecting to hear on a Monday morning, but Doc Emrick announced his retirement from broadcasting. He had an absolutely prestigious career. You may know him from him calling epic Stanley Cup Playoff games and regular season matinee or night games on NBC, but did you know he also called Brett Favre’s first career pass, which was caught by Brett Favre?

As a somewhat younger adult, Doc is essentially in a tie for number one hockey voice of my childhood. Pat Foley holds a special place in my heart being a Blackhawks fan, but Doc was the voice of the biggest moments, and his contagious energy, endless list of verbs, and passion for the sport was infectious for hockey fans like myself.

And who could forget many of his famous catch phrases?

Rang it off the pipe!

And it would not go!

Finesses it. Careens it. Shuffelboarded it. Wedged it. Worked it. Rattled it. Guided it. Seal-soccered it.

These are all verbs Doc used in one single game (Game 1 of the 2013 Stanley Cup Final). If you have not heard it, give it a listen. It is truly incredible.

Although Emrick was known for his endless vocabulary and making the stakes feel high and delivering every time, by all accounts, he’s the nicest guy in the world. He treated those around him with class and respect, as well as the players he covered and never made any moment about himself. He often would let moments breathe, and he called some of the most outstanding hockey moments of the past few decades. Doc was class personified.

I always how appreciated how complimentary he was of his broadcast partners. Whether it was Eddie Olczyk, Pierre McGuire, Brian Boucher, or anyone else, Doc always leaned on color analysts for their astute knowledge of the game. Although every moment felt bigger with Doc’s voice behind it, as I mentioned, he knew when to let moments breathe and when to lean on his color teammates analysis which made the broadcast all the more enjoyable when he served as the moderator for in-game perspective.

And my oh my, was he a great storyteller. His introductions, scene setting, historical knowledge, and ad-libbed excitement and colorful descriptions were pure art in verbal form.

Part of what made Doc so great and why I called him “classy” is he always came across as thankful, grateful, appreciative, and informative. He understood how lucky he was to have the fortune to call the highest level of hockey games – the NHL, Stanley Cup Playoffs, and Olympics. He would even thank we the fans for ‘inviting him’ into our homes. Although he may never have outright admitted it, he knew the league was behind in popularity against the likes of the NFL, MLB, and NBA, and he did his best to keep fans entertained, knowledgeable, and dialed in. It was easy to locked into a Doc Emrick broadcast, because his animated, vibrant broadcasts always brought a special dynamic to the big games he called.

But I know why you’re all here. Here are just a few of my favorite calls of his:

I’m really going to miss Doc, but today is a celebration of a Hall of Fame career and a well deserved ride into the sunset. Hockey booths are not going to be the same without him and the late Dave Strader calling games late into the spring and summer.

Thank you, Mr. Emrick. There are big shoes to fill!