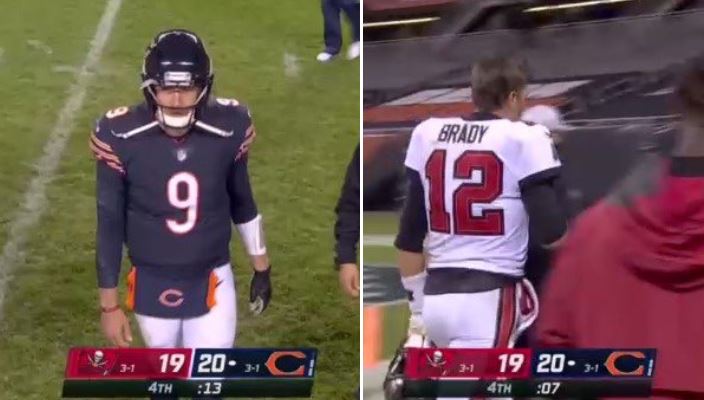 Nick Foles has done it to Tom Brady again. Except this time Nick Foles plays for the Chicago Bears and Tom Brady for the Tampa Bay Buccaneers. After the Buccaneers lost to the Bears 19-20 on Thursday night, after Nick Foles marched the Bears down the field for the game winning field goal; Tom Brady was not able to answer and even seemed to forget what down it was on the final fourth down play of the game. And After the game, just like during the Patriots loss to the Eagles in the Super Bowl Brady ran off the field without shaking Nick Foles hand.

Brady refused to shake his hand after the game both times. ? pic.twitter.com/5OVs0H774C

Since everyone is talking about this I thought I’d chime in. Why would Tom Brady have to shake Nick Foles hand? Is it really that big of a deal? I say absolutely not. It’s nothing. Brady and Foles competed in two really close games and emotions can get the best out of players during tough emotional games. If this was a 24-10 Bears win I think Brady would have shook his hand. But sometimes during tough emotional games the cordial after the game handshake doesn’t always happen.