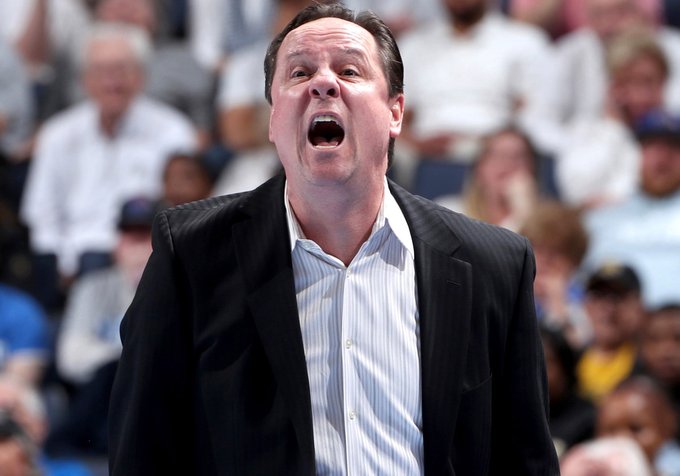 Wichita State head basketball coach Gregg Marshall is being investigated for misconduct. Inlcuding.. punching a player. This story is pretty wild so strap on to your seats as we go through some of the details of what is going on at Wichita State.

[The Athletic] – • During a practice that season, Shaq Morris attempted to block teammate Zach Brown’s shot. Brown fell awkwardly on the play, and Marshall rushed over and began chewing out Morris for what he deemed a dirty play and then shoved Morris in the back, according to multiple players who witnessed the incident.

Marshall told Morris to “get the fuck out of practice” and then followed him out of the practice gym, two players said. Before Morris could exit the double doors of the gym, Marshall ran up behind Morris and punched Morris between the shoulders near his neck, according to the players. An assistant coach intervened.

Instead, Marshall quickly turned his car around and followed the student’s car, eventually blocking his car at an intersection in the parking lot. According to an eyewitness, Marshall got out of his car and started yelling at the student, asking “Do you know who the fuck I am?”

The student had his window down and responded, “I don’t give a fuck who you are.” Marshall approached the car and, according to the eyewitness, attempted to punch the student through the driver’s window.

Of course more came out of this as well as this news trickled out.

Shaq Morris told me that he informed Gregg Marshall that his mother had cancer just hours prior to Marshall punching him in the head in practice. https://t.co/W5R2NpQ2VU

Gregg Marshall’s wife has been kicked out of stands before for being out of control. And we had this famous video of Greg Marshall in a scrimmage in Canada going bonkers towards the referees:

Unbelievable. It seems like Gregg Marshall has a huge anger problem. I am pretty sure that Wichita State will be swift with punishment and Gregg Marshall will no longer be the head coach at the University within a week. But man, this guy makes Bobby Knight look like a choir boy.