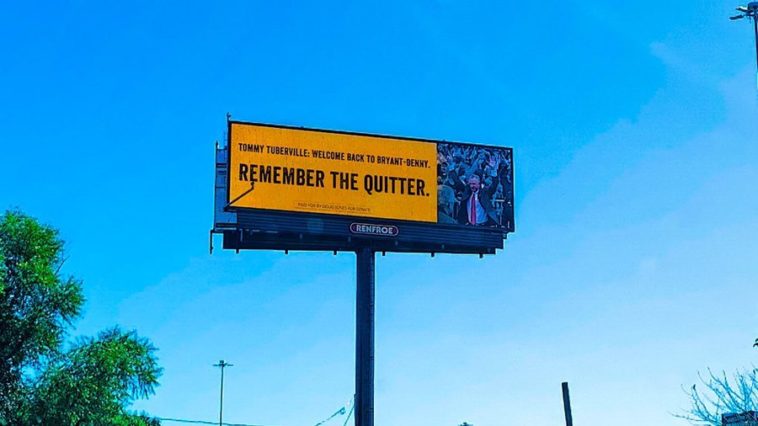 Forme Auburn head coach and coach of multiple college football programs Tommy Tuberville is running to be a US Senator as a republican nominee in the state of Alabama. At halftime of the Alabama versus Texas A&M game on Saturday an advertisement running by Doug Jones (democratic nominee for senate in Alabama) trashed Tommy Tuberville calling him a “quitter”:

Can’t stop laughing at this anti Tommy Tuberville commercial. 100% chance it was made by a Alabama fan ??

“It’s not just that he’s a quitter, it’s how he quits,” the commerical spoints out. It also points out how he got $5 million dollar buyout from Auburn university. Tuberville has made his support for Donald Trump a huge centerpiece of his campaign as well. The Doug Jones campaign even bought a digital billboard with the same message:

The Doug Jones campaign did a digital billboard buy on the Tuscaloosa exit, “welcoming” Tommy Tuberville back to town. pic.twitter.com/SAgMar35hl

It’s pretty amazing that this advertisement even though it has to do with football more than politics probably works in Alabama. We all know that football is king of the south and as the race heats up I am sure that both Alabama and Auburn fans will have their eyes closely situated on this Senate race.