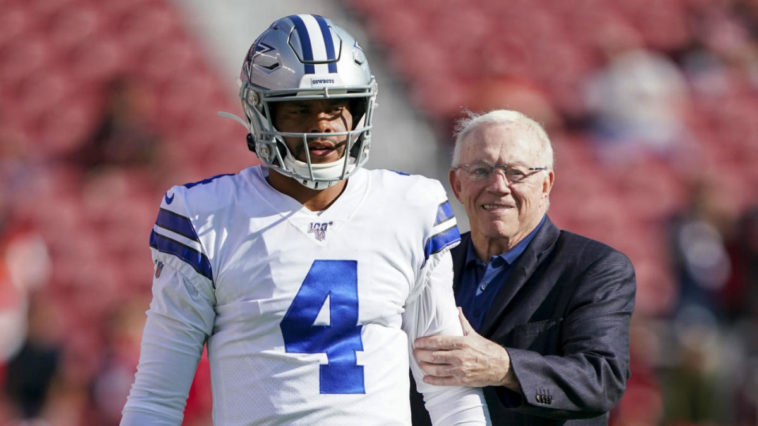 Dallas Cowboys owner Jerry Jones did his weekly spot on a Dallas sports radio’s 105.3 The Fan in Dallas today. And what he said about Cowboys quarterback Dak Prescott will turn some heads as it seemed to be the most backhanded compliment at his quarterback you can ever give. The Cowboys owner was asked about if there was a “major gap” between his team and the Kansas City Chiefs. He answered with high praise for the Chiefs especially forClyde Edwards-Helaire and Patrick Mahomes while givine a back handed compliment to Dak. Here’s the clip:

Transcript: “[Mahomes] is I think at the highest level right now because of frankly as much as just his natural ability to make plays, his mobility. This guy’s very quick and elusive and can get in and out of situations with his feet and buy time. The quarterback we played Sunday [Russell Wilson] is of that kind of nature. He has great ability to get in and out and then make the play. That play Dak made at the end of the game that got intercepted, well, the result of Dak’s ability that let him get that ball off was really great and outstanding. Well, these guys do that — have that ability a lot — they are very quick-footed. They have the unique ability to possibly take their eyes away from the field for a minute and then immediately focus back and see. Romo had that. So he could turn his back and turn around and hand-eye and get it done quick.”

So this wasn’t a direct “shot” at Dak. But it defintely was a backhanded compliment. Here’s the play in question and man things are never smooth sailing in Jerry’s World.

It's amazing that anyone could watch Dak get blasted here, maintain his balance, get up, and get a throw off (with everything else that had happened to this point factored in) and still complain about him. pic.twitter.com/JerZMZFvUj