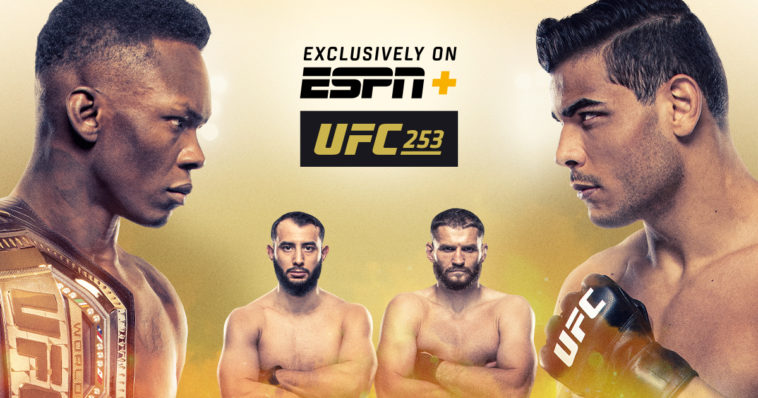 FIGHT ISLAND IS BACK!! What a better way to kick it off than with 2 TITLE FIGHTS! We are truly in for a doozy tonight and I for one simply cannot wait.

In our first of two title fights, we crown a new light heavyweight champ for the first time since December of 2018. In fact, since March of 2011, no one not named Jon Jones or Daniel Corner has held the title, so this is truly a historic fight. That co-main event is between two former challengers who have come up short in the past. Dominick Reyes who probably gave Jones his best fight takes on Jan Blachowicz who has been on quite a run recently himself. These two are going to put on a great fight, more on this one later.

The main event is all you could ever ask for. Title fight. Two undefeated fighters. Legit animosity. If only it had a sellout crowd. Israel Adesanya attempts to defend his title against the absolutely MASSIVE Paulo Costa. Neither of these men has ever lost in MMA, something’s going to break, it’ll go down tonight.

Besides the two title fights, we have a pretty exciting card with plenty of international fighters. Let’s take a look at that full card with some updated betting odds.

Once again we are going to pick the whole card because this is a huge show and we made some money last week.

Khadis Ibragimov is 0-3 in the UFC. Let’s ride with the newcomer in Marques despite the massive age advantage.

In a battle of heavyweights, the edge is heavy on the older fighter Juan Espino who debuted on the Contender Series and careers a 10-1 record. He should have more power, and he was a late starter in his career so maybe the bookmakers have the right idea here. Jeff Hughes has been on the wrong end of a couple of decsions in his last two, lets stick with the dog.

Both of these guys made their debuts in the Contender Series. Camur made his UFC debut and is still undefeated. William Knight wants nothing more than to end that undefeated streak in his own UFC debut. This dude is IMPRESSIVE. Knight might be undersized in height but definitely not in stature and power, I love this matchup at lightweight.

Klein missed weight coming into his UFC debut, he should be looking to make sure he gets that win because a loss and a missed weight cut could be the end of a UFC run as soon as it begins. I’m taking Shane Young in this fight just because I’ve actually seen him fight. This could be a stay away strictly because of a lack of familiarity.

When you see a line like this and the name is actually a known name, I feel like you have to take it. Diego Sanchez is 12 years older than Jake Matthews and the odds definitely reflect that but why not roll the dice against a guy who just hasn’t been able to finish inferior opponents, as of late, in Jake Matthews. Let’s ride with the massive number. Diego you crazy bastard!! Please get that win!!

Not much to say here, I like Brad Riddell.

Tukhugov comes in with a bit of a record. Not a great one at that. He was involved in the post-fight melee at UFC 229 between Khabib Nurmagomedov and Conor McGregor as he was working Khabib’s corner. He also recently just missed weight by 4 whole pounds and that was after weighing in with 90 minutes left. There can be many ways to analyze that, some may say he doesn’t care, some may say something is going on. We won’t know how it will affect him until he goes out and fights Saturday night. With all that being said I’m going to ride with Dawodu, lets ride with the dog who is looking for a massive payday himself.

Ride the hot hand or ride with the talent? I’m going with talent. Ketlen Viera is straight up more skilled than Eubanks and I don’t think Sijara will be able to overcome that in this fight.

Kai Kara-France has slowly become one of my favorite fighters in the UFC. He puts on great fights but doesn’t get finishes. That can eventually be a problem. I have a track record of picking my favorite fighters and it hasn’t always led me to the money. I’m riding with Royval, a finishing machine and a flyweight that is extremely fun to watch. An extremely live dog.

Dominick Reyes should take it personally that he doesn’t already have his title, I think he could potentially make quick work of Jan. Blachowicz is tough as hell so hopefully, he hangs in for a great fight but I just think Reyes’ versatility and length will be too much for “The Polish Hammer”.

This is such a tough pick because this fight can truly go 1 of 2 ways. Either Paulo Costa rushes Adesanya and puts him away before we can see “The Last Stylebender” get any sort of offense off. OR we see Adesanya outclass Costa and out technique him to a finish or a decision late into the championship rounds. Adesanya is one of the most technically skilled strikers in the whole sport. He thrives in counter punching and his fitness seems to be much higher than Costa’s just on paper after factoring in Costas size and the sheer weight cut he has to endure to make the 186lb Middleweight limit. In Adesanya’s last fight against Yoel Romero, we saw a weird pace because of the lack of aggression from Romero. Truly a conscious decision by “The Soldier of God”, a decision that I don’t think Costa will make. This will ever be in Adesanya’s favor. This has Fight of the Year all over it, I hope it delivers.