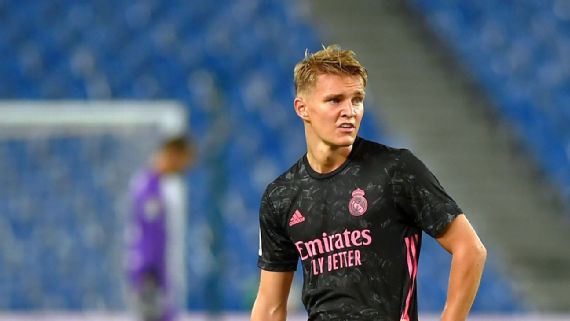 La Liga is back! There is a lot to be excited for this year.  Yes, Real Madrid, Barcelona, and Athletico lead the way, but there are a lot of very strong teams that can be legitimate title contenders.  Sevila is first to come to mind, coming off of their Europa League Championship. For Sevilla, the keys will be to improve their scoring rate, and to improve their record against the Big 3 (they were crushed last year by Barca/Athletico/Real).

Real Madrid have a strong team this year and should be considered the favorites to win and repeat as Champions.  Madrid have made almost no additions to the squad (other than Martin Odegaard), but their have been a fair amount of exits. Among the departed players to leave are Gareth Bale, Sergio Reguilón, Achraf Hakimi, and James Rodriguez.

Madrid kicked off the season with a 0-0 draw against Real Sociedad.  Although Madrid controlled possession for long stretches of the game, they could not find the final ball or attempt on goal to win the match.  Once Hazard and Asensio can get involved in the starting xi, this Madrid team should kick it up a notch.

Courtois began right where he left off.  Made a world class save to prevent Sociedad’s best shot on goal the whole night.  There is little worry about the GK position for Madrid.

Had to deal with speedy opposing players all night, and did well.  He had some nice plays with Vinicius.  This is a big year in the development of Mendy to take his game to the next level.

Love seeing the captain back in action, particularly after missing him so badly in the Man City loss.

Varane is FAST.  Great showing from the Frenchman, who had to deal with through balls all night and the young Sociedad attack.  Well done.

Carvajal is fantastic.  Hoping he does not get hurt this year, because Madrid suffer without him.  Always puts in the defensive work and provides solid service into the box.

Shows promise of a player who can contribute for a long time.  Linked up well with Benzema a few times.  He played directly behind the French striker, but often seemed to get confused with Modric.  The two don’t seem like they would play well together, as they end to take up many of the same spaces and attack positions.

Modric, who is now 35, played extremely well in the first half.  He still has that magic about him.  Luckily, he will be able to rest more this season, with the emergence of Valverde and the return of Odegaard (also… where the heck is Isco?!?).

Madrid’s most composed and consistent midfielder.  Along with Modirc, he controlled possession and had a few attempts on goal.

Didn’t do too much all night, but also needed better service.  He was usually surrounded upon immediately entering the box.

Does not look very strong on then right side.  Perhaps he would be better upfront in a two striker system.  That seems the only solution, since he would be behind Vini and Hazard on the left.

Benzema looks to still be the strongest attacking player.  He just could not get the ball in the right areas tonight in the box.