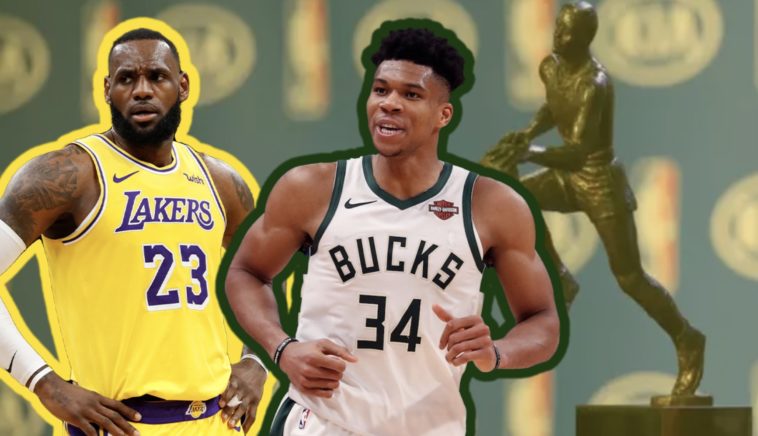 LeBron James currently has four NBA MVPs, which feels a little odd for someone who feels like they’ve been the best player in the NBA since 2010 or so. Ten years of dominance but 4 MVPs to show for it. Yet, when we consider the true meaning on MVP, is the Most Valuable Player for the regular season. Not overall, not for the playoffs, not who can kick it up at the right time. Giannis Antetokounmpo ended up with the MVP, again, in back to back years. Was he the best player in the regular season? Yes. Is there a problem with the award? Yes.

After a video talking about it, and after trying to figure out how LeBron, once again, didn’t get his 5th MVP, I just came to the realization that the award needs to come out sooner. The votes come in right before the playoffs, so why wait? Why wait to see what happens? That is what truly confuses me about the NBA.

Yet, this doesn’t mean the MVP award is wrong all the time, it’s pretty accurate, usually.

Imagine if this was a starting lineup ? pic.twitter.com/0kQwYelsKv

Since 2000, there have been 5 back-to-back MVPs, as you can see 3/5 are multiple time champs in that time frame. LeBron James, Steph Curry, and Tim Duncan all have 3+ rings, yet, you have the Greek Freak and Steve Nash who both haven’t made the finals. For Giannis, this should be different than Nash, he is only 25 and only getting better, so it is only a matter of time before he takes off and gets that finals appearance at least.

Day 2 YOUTUBE: Another MVP year down the drain for LeBron as Giannis goes BACK-TO-BACK ? ? Did the Greek Freak deserve this 2nd #NBA MVP?!

This is just the beginning of a legendary career ? pic.twitter.com/rVewjTBGbI

NBA Players Who Have Won DPOY and MVP In The Same Year:

Back to back ? Deserving or nah?! ? @podthat

"Please don't call me MVP until I win it again next year."

And he freaking did it. pic.twitter.com/fdZ6LaJQlU

This is why MVP voting should include the playoffs https://t.co/XbDpFFB9di

Congrats to Giannis on winning the MVP.

But we already know who the real MVP is. By the way he's playing tonight. pic.twitter.com/PWGx87YXDG