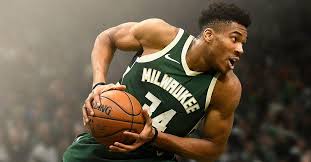 & the winner of the NBA winner MVP award is….

Who has won his second consecutive MVP award ? ?

BACK. TO. BACK + Defensive Player of the Year ?? @thesportsontap pic.twitter.com/EMvu6RVOA5

In hindsight I hate that they vote for the MVP award before the playoffs end. The most important part of the season gets thrown to the trash. But Giannis was incredible and deserves the MVP of the regular season.