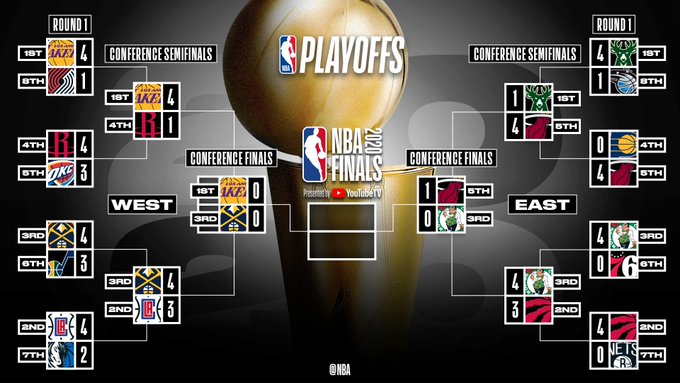 The @MiamiHEAT go up 1-0 and the @nuggets win Game 7 to advance to the Western Conference Finals in Tuesday's action! #NBAPlayoffs pic.twitter.com/8Sgj7RXxke

We have finally made it to the best of the best in each conference and while there are some here that aren’t a surprise (LeBron’s Lakers), there are also strong 3 seeds who took out their opponents in game 7 (Nuggets and Celtics, and a 5 seed who has played like a one seed this whole time (Heat). Each team is super unique and will matchup very interestingly with their opponents. With all that being said, let’s analyze these matchups to see who will be in the NBA Finals.

The Celtics continue to impress with their young core and find themselves in their 2nd ECF in 3 years with Jayson Tatum leading the way. Tatum led all Celtics with 24.3 points per game and also led in rebounds with 10.3 per game. Should I also mention he is leading them in 3-point percentage as well? There is more to this team than Tatum such as Jaylen Brown who averaged 20.7-8.7 against the Raptors and led Boston in steals while defending arguably their best player in Pascal Siakam. Brown also shot nearly 43% from the field. Marcus Smart also stepped up and the team was able to hold the Raptors to just 99.7 points per game this playoff while putting up 105 per game themselves. They had better defense than the best defensive team thus far in the postseason, and they a strong enough offense to overcome a championship D. The Celtics will have to play more disciplined than they have been with the 103 turnovers they had in the Raptors series, the Heat will pounce on that as they have been all postseason and that puts Boston in a spot I am unsure they can get out of.

The @MiamiHEAT: 9-1 in the playoffs ? pic.twitter.com/2cx5NWABmd

The Heat took care of business and completed their gentleman’s sweep of the number one seed in the East swiftly behind Jimmy Buckets. Butler’s first two games of the series are a good summary of just how many ways the Heat can beat you. One night, Jimmy scores 40 and pours it on Milwaukee. The next game, he barely scores double digits but the last two he scores are on a foul he drew on the DPOY Giannis. The Heat are so good at so many areas and one that has improved dramatically this postseason is that they have 4 players shooting above 40% from downtown and they also shoot above 85% as a team at the charity stripe. Those along with a team that relentlessly forces turnovers (114 in 5 games), are a championship winning formula.

The Celtics have a top 3 in Tatum, Brown, and Walker that can go toe-to-toe with any team in the NBA. The only thing I am not a huge fan of is their experience. Brad Stevens has been to a conference final with some of these guys, but he hasn’t been around the block the same way that Erik Spoelstra has been. I think that Jimmy Butler will not allow the Heat to lose here and really believes in a championship for the Miami Heat.

The Miami Heat are the dogs the Clippers were pretending to be. pic.twitter.com/RJZkZ20Ova

Game 1 of @nuggets vs. @Lakers tips off Friday on TNT. pic.twitter.com/2aQO5eCgIk

The Lakers have been relaxing and waiting on the Nuggets after obliviating the Houston Rockets. Following a game 1 shellacking, the Lakers bounced back to win the next 4 games by a margin of +51. The Lakers beat the Rockets so bad, Mike D’Antoni quit being the Rockets’ coach. The story is much of the same with James and Davis averaging a double-double with LeBron’s 7-or-so assists to go with it. The Lakers also have an astounding 6.2 blocks per game thanks to a small-ball Houston team that was not built to take down a Lakers’ team in 7. LeBron sits on his throne and laughs as Kawhi and Giannis have both had 2nd round exits and has felt a strong purpose for this year’s bubble and Finals. Rajon Rondo has also been a revelation shooting 44% from the 3-point line this last series and is averaging 10-4-7, becoming a HUGE boost for this Lakers team struggling at the guard positions. The Lakers will have to be on their toes because the Nuggets are a bit taller than the Rockets and the Lakers won’t have as easy of a time outrebounding a team 45-32 rebounds a game.

Consistency, discipline, hard work, never being satisfied. This is a different level of greatness! https://t.co/gp9qqfBrTL

The only team in NBA playoff history to comeback from not 1, but TWO 3-1 deficits in a best of 7 series. How did the Nuggets do it? With some of the best 2-man game in the history of basketball between Murray and Jokic. When the chips are down and the Nuggets have their back against the wall, that’s when Murray explodes for 40 points to eliminate the favored Clippers and Jokic gets a triple-double in the 3rd quarter. Jokic is not only the best passing big man in the game, he is a top 3 passer in the gamer PERIOD. This series, him and Murray both averaged 6 assists a game. Throw in Gary Harris for extra scoring and solid perimeter defense and the soaring MPJ, and you have a team that doesn’t know when to quit.

Joker dropped 16 PTS, 22 REB and 13 AST in Game 7 to lift the @nuggets to the Western Conference Finals!

Both of these teams are here for a reason. The Lakers were the best team in the West and have a mission. The Nuggets are scrappy and will fight tooth and nail against anybody. I can admit I have bias in this, but something about this Nuggets run is beyond explanation. I truly think Jokic and MPJ can put in work to grab rebounds at a similar or same pace as LBJ and the Brow, and no guard on the Lakers matches up with Murray.