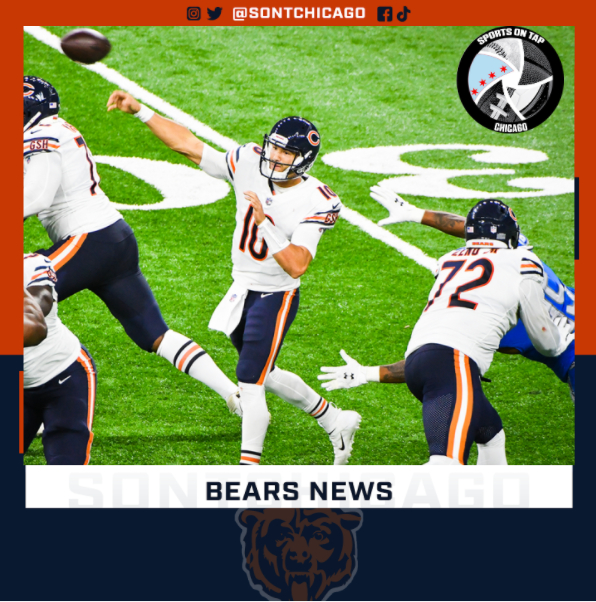 The Bears gave nearly ever person in the city of Chicago (and Detroit, for that matter) a heart attack or two during their 4th quarter comeback yesterday in week 1. Things looked dire as Mitch had a rough first half, followed by an ugly fumble early in the 4th. Despite all that, the Bears got tough and muscled out a 27-23 win on the road in Detroit. While a lot seemed to go wrong, particularly in the first half, there was also a lot that the Bears got right. Let’s take a look at the top 3 pros and cons of the season opener

A very common yet very valid criticism of head coach Matt Nagy is that he does not do much to establishing a running game. Last year was a very fine example of his distaste for the ground game, with the crown jewel being that he ran the ball 7 times against the New Orleans Saints last year. Granted, teams with stellar QBs don’t rely much on the run but Matt Nagy does not have that luxury. With that being said, Nagy remained committed to running the football and found frequent success when he kept the ball on the ground. In all seriousness, I know it must be hard for Nagy to swallow his pride and run this ground and pound style when he specifically was brought in to rejuvenate a franchise’s offense that historically has been a run-first, trench fight for 4 quarters. Montgomery and Cohen combined for 105 yards on 20 carries and Mitch picked up 26 yards on 3 carries himself, which is something that the Bears coaching staff definitely discouraged back in 2019.

Despite the team generally being frustrated in the 3rd quarter and a couple of unmotivated defensive series, no one on the team ever gave up. You could argue that the Bears gave up in the London game last year but yesterday against Detroit, it was all about bend don’t break. Khalil Mack is quickly becoming a leader on the field, the role that is meant for him.

In a high-pressure moment like a 4th quarter, 2-minute drill, Nagy and the coaching staff did a great job of managing the clock and not wasting timeouts. I know it can be hard to say that they did a “good” job at this, but when the clock is mismanaged, it really does make winning an uphill battle.

The Bears defense did little to make Matt Stafford uncomfortable in the pocket. Akiem Hicks did have a huge sack late in the game to throw water on Detroit’s momentum but beyond that, the Lions offensive line gave Stafford plenty of time to do this thing and he really did have superb passes that kept them on top for 80% of the game.

While Mitch did grab his nuts and clutched the win, I still can’t excuse 3.5 quarters of dismal passing. He was throwing behind guys, in front of them, just was all over. It’s so strange, he seems to be the most accurate when he’s rolling out, what’s with that? Ultimately, had he led a few of his receivers, Bears would’ve had a commanding lead at halftime.

Maybe I’m being too hard here, but the Bears came out to this game looking very flat and uninspired. Maybe it was because they were on the road but there wasn’t a whole lot of fire being shown by anyone. The defense didn’t set the tone early, the offense got discouraged early, and everyone was going through the motions. Really, up until Kyle Fuller intercepted a tipped ball, I think it’s safe to say that every Bears fan had a thousand-yard stare thinking about what the rest of the season was going to look like. Perhaps no one gave up (which is how they stole a W) but there were some folks lacking energy on the field.

What do you think? Did I miss any glaring issues? Are the Bears worthy of more praise? Let me know what you think! We’re on to the Giants!