UFC in the times of COVID-19 continues to trek on but not without a little bit of creativity. We have another great card of fights but only a few picks because of the lack of odds. Vegas cannot keep up with fights getting reworked the day before they go down, apparently.

The original main event has been off for a week now, we’ve known that. What was supposed to be Glover Teixeira vs. Thiago Santos has now become Michelle Waterson vs. Angela Hill. But since Thursday, there have been another 4 fights that have been changed. So here’s the final fight card, hopefully, this holds through Saturday night. 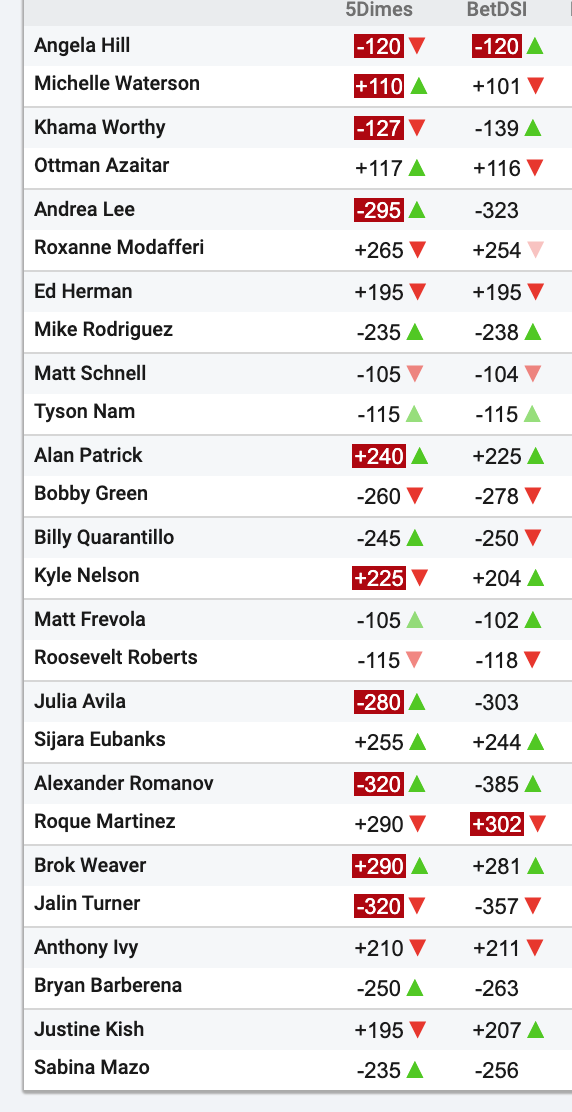 Clearly the odds sites couldn’t even keep up with all of the fight changes as they still have the Nam/Schnell odds as well as the original Roberts/Frevola odds. Maybe one day they will be as quick as me.

Anyway, a couple of my favorite fighters are scheduled for action on Saturday night. In fact, two of them are on opposite sides of reworked bouts. The first one being Roosevelt Roberts, who was supposed to face Matt Frevola. Instead, he’s facing Kevin Croom. Kevin Croom is making his UFC debut. He has fought once in Bellator and lost. Roosevelt Roberts is becoming a UFC veteran and a very good one at that. This will just be a roadblock for him. Roberts is coming off a submission win against Brok Weaver in his last fight. I can’t imagine what the odds on Roberts are to win this fight but I bet it will be ugly.

The other fighter I wanted to highlight was a guy who I picked last week before his fight got canceled. Might I add, I also went 4-0 last week so we are riding hot right now! That man is Jalin Turner (-320) and he is fighting up at a catchweight of 150 lbs to take on Brok Weaver (+290) because both of these dudes just want to scrap. Weaver is not going to be an easy out for Turner and if anything, he will be as big of a test as Turner has faced in his young UFC career. But Turner is a dawg, I like his length. 6’3” fighting at 150 I’m in. Let’s do it. Turner gets that short notice W.

Another last-second add to the card was a fight that didn’t get to make his last week because of positive COVID-19 tests. The debut of Alexandr Romanov(-320), the undefeated heavyweight out of Moldova. This dude is 11-0 with 6 Submission finishes and 5 KOs. I’m excited to see if he’s the real deal but he looks to be fighting a scrub. Heavyweight action is always fun because these guys truly are playing with fire, one punch and it could be over. Romanov seems to have that power in spades and with his strong historical name, he could be in for some great things.

If we are going to make some official picks and continue the hot streak from last week let’s get started with some main card action, no better person to start with than the aptly named Billy Quarantillo.

Quarantillo has become somewhat of a workhorse, always taking a fight and performing at a high level. Whether it is in the UFC or at the Contender Series he’s been getting W’s in the octagon. Quarantillo took down a favorite of mine in Spike Carlye last time he stepped into the cage, he’s riding a 4 fight streak in the UFC between the main stage and the contender series so let’s see him extend that and maybe even get a finish.

This is a really tough pick and in hindsight, you know my pick before you read these words but this fight is truly a pretzel for my brain. In one regard I don’t believe that Waterson has the power to finish this fight. Hill is just too tough/crafty to get finished. I also think that Hill is tough enough and surely athletic enough to be at top shape into the championship rounds of a 5 round main event. Waterson has fought in 3 main events before and this will be Hill’s first. I just think the momentum of Hill as of late is too tough to stop, Hill is peaking and Waterson is on her way down. give me Hill in this main event.

The Co-Main Event is just a fight that I want to talk about without making an official pick. it’s too tough to pick a winner in this fight. Azaitar is 12-0 and has unreal power for his size. Worthy is another top finisher and has some versatility with is finishes. I have no idea where this fight is going to go but I know it will be fun. I just want it to be fun.