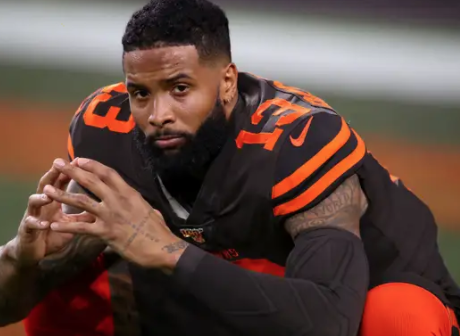 Alright. So we all know that Odell Beckham Jr. is on the Cleveland Browns. But I think we have a whole new meaning now of what it is to be a true Brown at heart. On the Thots Next Door Podcast: Episode 2 which is co-hosted by the Instagram model who said she hooked up with 7 Phoenix Suns Players at the same time was interviewing Slim Danger on the pod. Who is Slim Danger? Well she’s Chief Keef’s baby mama. And Slim said that she hooked up with Cleveland Browns WR Odell Beckham Jr. And not only did she hook up with him but Odell Beckham Jr likes to be pooped on during sex. Here it for yourself:

So apparently Odell Beckham Jr likes to be shitted on ?

Idk who the hell these girls are but i hope they are lying about OBJ ? pic.twitter.com/1WwLwj6AbM

I am going to go with I don’t believe this girl. Look maybe Odell likes to be pooped on I mean he is on the BROWNS. Maybe he enjoys a big dump on his chest. But he’s Odell he could literally get so many girls why would he go after Slim Danger? Slim Danger isn’t the world’s most beautiful girl. She’s actually ugly. Sorry not sorry. So no, I don’t believe her story. Maybe she heard it through the grapevine but it wasn’t her. No chance in hell. Anyways I just hope this trend continues of these thots trying to expose athletes because they sure of hell make great memes. Welcome to the Cleveland Steamers:

How odell be sampling the load before his meal pic.twitter.com/AxqPmtK5OC

odell beckham when he hears his girl say her stomach hurts pic.twitter.com/M8m2tjeyXW