This will be a quick in an out blog with some picks because we just need to get back on the horse with a stretch of proven winners. Great main event coming at you on Saturday night from the UFC, as Alistair Overeem looks to climb his way back to what could be a final title fight at heavyweight. Let’s take a look at all of the main card fights. 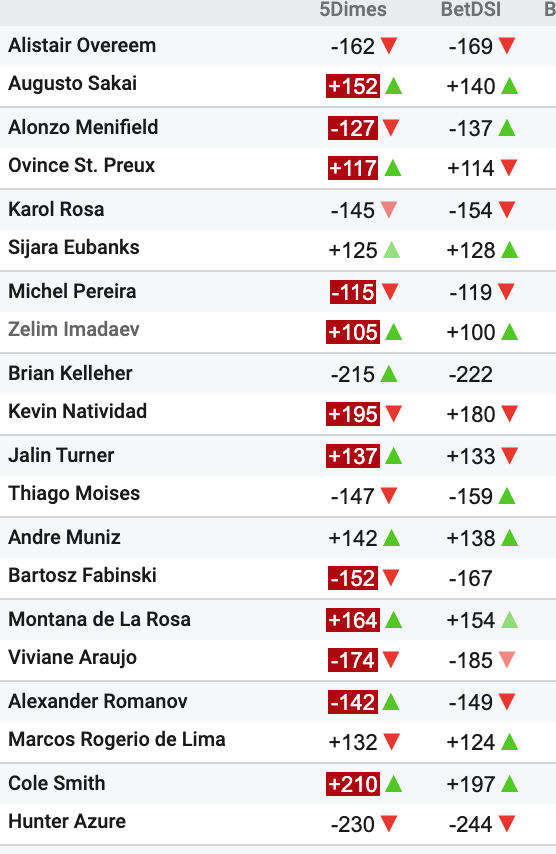 Brian Kelleher is a personal favorite of mine. The dude is a straight dog. He’s a grinder in every sense of the world, does quite a bit of coaching while also having a scrappy career himself. He’s fighting an opponent on short notice in debuting Kevin Natividad. This is seeming to be a normal thing for Kelleher as his opponents are always changing last second. No problem for him, he’ll look to make it quick and get a W.

Jalin Turner is just a fun guy to watch, an up and coming fighter and someone who is HUGE for his division. Turner comes in at 6’2” as a 155 lb lightweight. He’s got great length and he’s not afraid to use it. Look for him to get that underdog W against the tough Thiago Moises who is coming off a second-round sub victory against UFC veteran Michael Johnson.

If you don’t know by now, you must be living under a rock. Michel Pereira is the most exciting thing in mixed martial arts right now. This dude is constantly flipping all over the place while actually being a great fighter. He’s probably a bit overmatched but it’s essentially a pick-em so you might as well have fun with your bet.

In what was supposed to be the co-main event last week, OSP will be facing up and coming light heavyweight prospect, Alonzo Menifield. In OSP’s last fight he took a close decision loss at Heavyweight against UFC veteran Ben Rothwell. Look for OSP to get back on track in his natural weight division. OSP may be getting up there in age as he’s now 37, but he still knows how to use his length better than anybody. Maybe he’ll extend his record with another Von Flux/Von Preux choke.

And in the main event, we have a classic matchup between the steady veteran and the trending new guy who is ready for his first real test. Alistair is no slouch. I truly went back and forth before making this pick. I initially really liked the value on Sakai, but I truly don’t think he’s ready for Overeem no matter how old he is. Sakai hasn’t faced anyone as good as Alistair and he’s never really shown that he’s super ready for the increase in talent, despite the record of 15-1-1. I still like Overeem and I think he’s motivated as ever to get that title right. Remember it took Jairzinho until the final seconds of round 5 to knock Reem out. Alistair then bounced back and finished Walt Harris. He’s very much still in this fighting game.