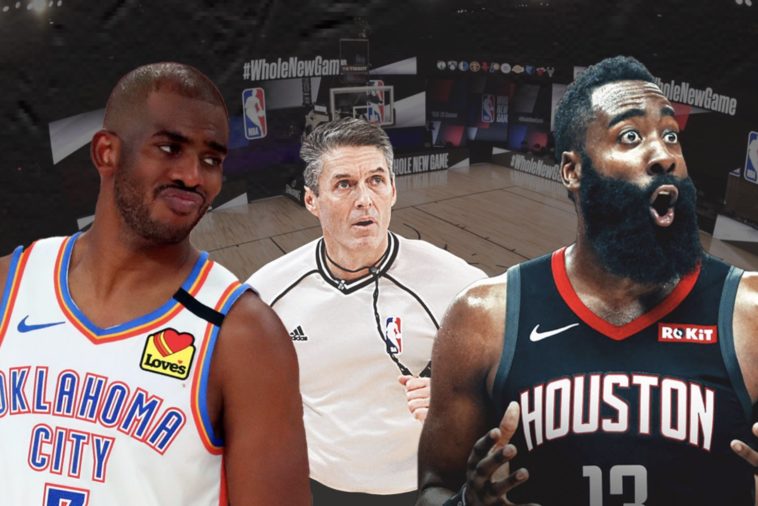 In a press conference following the Thunder’s 104-102 loss to the Rockets in Game 7 of the Western Conference Quarterfinals, Chris Paul shared harsh words about the officiating crew, particularly head official Scott Foster.

With just over two minutes remaining in the first half, James Harden drove to the rim, where he was met by Chris Paul. The officials called a blocking foul on Paul, sending Harden to the line for two shots.

Paul kneeled down to tie his shoe, hoping to be able to see a replay of the foul on the big screen before Harden was able to take his shots from the line, most likely so he could ask his coach to challenge the play.

Head official Scott Foster called a delay of game on Paul while he was tying his shoe, even though the cleaning crew was on the floor drying off the floor following the collision between Harden and Paul.

Paul said, “It’s crazy. This has been going on in the bubble – like the replays. They show the replays sometimes so that, obviously, it’s an advantage if you get to see the replay and then you challenge. So, myself, I dropped down to tie my shoe up to hopefully see if we see the replay. Scott Foster walked over to me and told me, “Chris, you ain’t got to do that. I got them sweeping up the floor.” OK, cool. So, I start tying my shoe back up, and he still calls delay of game. That’s— don’t make no sense. But I don’t know. That’s crazy. He just – I don’t know. We could’ve won the game, but that situation – the league knows. Yeah. They’re going to fine me. I said his name. Yeah. We already know the history.”

I asked Chris Paul about the officiating – specifically that delay of game call. He named Scott Foster as says he knows he’ll get fined.

A passionate response that includes “that shit don’t make no sense…we could have won the game” pic.twitter.com/w2MpKr3Uyr

Paul and Foster do have history with each other, most notably in a 2008 playoff game between the Spurs and Hornets.

According to a tweet from Marc J. Spears, Paul said that Foster reminded him of that prior to last night’s Game 7 matchup.

It was clear in both the Rockets vs. Thunder game, as well as the Bucks vs. Heat game, that the officials were too involved, especially late in a PLAYOFF game. There should be no reason that the officials have enough power to fully swing a game, but yesterday’s games proved otherwise, and players were not happy.