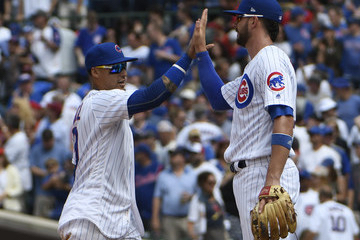 Lets just start off with this, I felt a lot better through the first half of the games played so far than the second half. The Cubs started the season on a 13-3 run and everyone in Chicago felt like it was 2016 again. That obviously didn’t last long as everyone was brought back to reality seeing the team go 8-11 since. Not only has the offense regressed since the start of the season, but the pitching staff has seen even more of a dip. Here is the ERA and WHIP of each pitcher through their hot start and what each looks like now.

Basically everyone has gotten worse except Yu Darvish, who just so happened to take home NL Pitcher of the Month honors today. He has been absolutely excellent this year and in the running for the Cy Young. Kyle Hendricks I’m not too worried about. Not only has he recorded a sub 4.00 ERA in every season of his career, but also has never finished with a WHIP over 1.19. If there is anything I am certain on, its Kyle Hendricks finishing this year with a sub 4.00 and a winning record.

Jon Lester on the other hand has been iffy. Even when he was sporting a 1.06 ERA I still wasn’t sold. Not only are his strike out numbers way down, but he has lost so much life on his fastball that he needs to paint the corners with precision to even have a shot for a quality start. The 36-year-old isn’t getting much younger and still has one more year left on his contract. Alec Mills and Tyler Chatwood are borderline back of the rotation guys. They will probably finish around a 4.00-4.50 ERA with a WHIP roughly between 1.2-1.4. Mills is in a much better position than Chatwood to get his numbers down. Any pitcher that has a 5+ ERA with a WHIP lower than the league average, it usually means they probably let up a 3-run homer here and a 2-run homer there that inflated their ERA. If his WHIP stays below a 1.2, I can see Mills finishing the year with a sub 4.00 ERA. Furthermore, Chatwood might have a rough finish to the year. He just went on the IL for the second time already this year and when he comes back, he might be moved to the bullpen with Quintana taking his place. I have always backed Chatwood in any argument because I know he needs to fix just one thing to become elite. Coincidentally, it is the exact same thing Yu Darvish had to correct and that is control. Chatwood’s stuff is up there with Darvish’s, it moves like crazy, but doesn’t do you any good when you don’t know where its going.

Lets get away from the rotation and talk about this offense we don’t even know what to think of. Ian Happ and Jason Heyward are leading the team while Kris Bryant, Javy Baez and Willson Contreras are among the worst with just one of them having a .200 BA. Honestly, I’m surprised this team is 21-14. Here are some not so great stat lines.

Anthony Rizzo, Kyle Schwarber, Victor Caratini and Jason Kipnis are also players who should improve their BA by the time the season ends.

Worry or not worry

These next 7 games will be the most important games of the season. The Cubs have 2 more against the Pirates before the Cardinals come to town for a 5 game series. I don’t see Milwaukee or Cincinnati figuring it out and finishing 10+ games over .500 so not worried about them at all. That leaves the Cards. Right now the Cubs are 3 games up in the division and if we can pull off 2 more wins against the Pirates and a series win against St. Louis, we should be in very good hands for the playoffs. I also am choosing not to worry because of how bad the offense has been. We have a 21-14 record with how we’ve been playing and if even half of those 8 players I mentioned above start turning it around, there shouldn’t be any reason the Cubs don’t take the division with ease.