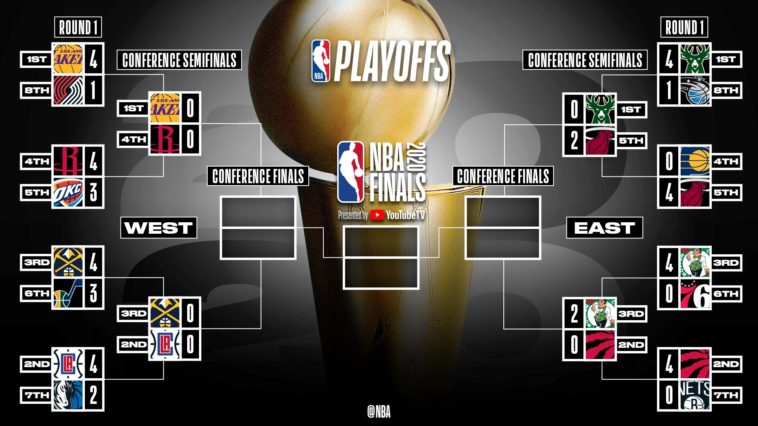 After getting 75% of my picks right last round (none of them in the correct amount of games but still beat), I am feeling awfully cocky about this round with the bigger names, heavyweights, and exciting finishes that we were denied in all but 2 series (Thank you Nuggets for clutching, and the Thunder always hurt me). There are some players coming back into the fold and others who are missing sometime but round two is here anyways so let’s get to it!

Giannis is averaging a career high in postseason points per game with 28.5 and is the leading rebounder in the NBA and fresh off of winning DPOY. He is probably on his way to winning MVP and the Bucks are still seeking the championship run that Giannis is destined for. The Bucks play great team ball with the second most assists per game and 6 players averaging double digits per game. This is possible with the shot creation of Giannis driving down the middle and being able to kick-out to competent outside shooters who have been hitting 3’s at a 39.4% clip. They will have to pick up their play a little bit and quit turning the ball over so much because they lead the NBA this postseason in total turnovers and that’s not going to fly against an opportunistic Heat team.

Duncan Robinson tied the Heat playoff record with seven 3's in Game 2 vs. the Pacers ? pic.twitter.com/MypFVIukzX

I misread the Heat but did clarify that they might have been coasting into the postseason. This is exactly what their play was, and it was obvious after they quickly dismissed the Pacers in 4 games with a +42-point differential by series’ end. Dragic ended up being one of the heroes of this series and leading the Heat in scoring. Jimmy Buckets was also shooting well with a 57% 3-point percentage! The Heat outclassed the Pacers in almost every way and are looking as ready as ever for a title run. They too have some turnovers to clean up on offense after the Pacers averaged 9.3 steals per game over the series.

Seeing as how the Bucks were the only team in the East to not sweep their opponent, there is a slight warranted concern for the Bucks going against this red-hot Heat team that played more like a team than the Bucks did last series. The Heat also have a lot more “go-to” guys than the Bucks do (I never considered Middleton an all-star) and I liked the Heat in the preseason as a title contender. All-in-all, I have doubts about the Bucks, not the Heat.

The Celtics had their way against the 76ers who were a little banged up but still had their best players ball out without even coming close to the Celtics variety of ways to beat you. The Celtics showed that they can run away on fast breaks, clutch out close games, and outscore you straight up. The biggest impression from the Celts is their defense that allowed only 100.5 points per game in the series against the Sixers. Strong, tough defense paired nicely with the three stars in Boston all averaging over 21 PPG (including Tatum with 27 ppg on 48% shooting). The Celts feel that they can beat you with the 3-ball on offense, or just straight up ISO up. It’s a little concerning that the point production drops off after Walker, Tatum, and Brown but everyone has a good idea on what their job is on the team and that should prove useful towards the ECF.

Kemba step-back to ice the game!

The Raptors continued to do what they have been doing all season but better. The defense locked down a Nets team that did not have their biggest threats healthy and then the Raptors ran away with insane scoring from VanVleet and Siakam (including 150 points in game 4!). I think that the Raptors honestly could have given their starters a little more rest but Gasol did not play as many minutes as I thought and could be integral towards a repeat performance once he starts to get up over 20 minutes per game. Gasol and Ibaka should be mismatches against Theiss for the Celtics that should be exploited.

I don’t think Fred VanVleet will ever miss a shot in the playoffs. pic.twitter.com/LyF8WiCXhR

The Raptors and the Celtics are two of the most similar teams that are very well rounded, play stout defense, and can get their scoring from a few different directions. I am not sure how the Raptors will adjust to a Celtics team that doesn’t need to rely on one scorer and am eager to see if they man up more. Ultimately, I think Siakam decides this series on if the Raptors win or fade out. I’m placing my bet on Siakam averaging something around 25-5-5 and shutting down Brown/Tatum to propel the Raptors closer to a championship repeat.

The King couldn't be stopped ? pic.twitter.com/6kZGGIHzHG

After a first-game scare from the Bubble MVP Damian Lillard, the Lakers buckled down behind the King and The Brow to give the Trailblazers the gentleman’s sweep they deserved for their work during the regular season. The Lakers have a top 5 postseason defense in FG%, points, and allowed assists. They have former DPOY candidate Anthony Davis to thank for that. The Lakers aren’t just a defensively solid team, they also have a top 3 FG%, assists, and free throws attempted unit with the number 4 offense at 117.2 points per game (Davis 29.8, James 27.4). The biggest concern with this Lakers team is the same concern as all season and that’s the drop off after those two but everyone seems to understand their job/role for the Lakers to be successful.

A lot will be made of James Harden's block, but he denied TWO attempts on that possession

Pay attention at 7.7 seconds. Harden with a quick glance at Dort. He stays low on Adams, crowds his legs. Simultaneously, he has his right arm hooked to launch towards the closeout. pic.twitter.com/9WB59jcR9I

After the Thunder found another way to break my heart, the Rockets find themselves in round 2 shaking off their losing streak in elimination games (which was 5). Hopefully this toughness along with Westbrook’s return (20 points in game 7) will be enough to take down the Lakers fresh off of their destruction of the Portland Trailblazers. Harden did not fare well against Lu Dort in game 7 but Dort did not fare well either as Harden blocked a potential game-winner, and then dodged an attempt to bounce the ball off of him. Covington also stepped up big time this series and will probably be LeBron or Davis’ defender. Westbrook and Covington will have to step up and Harden will have to bounce back to make this a series at all. The Rockets do have the number 3 ranked defense this postseason in points and were strong at forcing turnovers in game 7. We will see how the small-ball defense matches up against the size and strength of Davis and King James.

Once again consistency is really important heading into the playoffs and the Rockets just did not show me anything that encourages me that they can beat the big bad Lakers of the west. James and Davis advance to the WCF and the Rockets start to wonder what the heck were they thinking?

Paul George on his big Game 5 performance after struggling to start the playoffs: “The bubble got the best of me. I was just in a dark place.”

The Clippers have made it to the second round and not without some controversy. There was Porzingis getting ejected in game 1, there was some missed flagrant foul-calls that never came to pass for Luka, and Porzingis and Luka not being fully healthy (or playing) by series’ end. The Clippers were unable to find an answer against a scorer on all 3 levels in Luka and will have to get creative to slow down Jamal Murray. Fortunately for the Clippers, they have offense of their own leading all NBA teams in PPG (126.7), FG% (50.1%), and are tied for the least number of turnovers per game. Powering this offense is reigning Finals’ MVP Kawhi Leonard on a modest 32.8-10.2-5.2 averages and 2.3 steals per game (fourth most in the Playoffs). They are also hoping to see more of the PG that showed up in the offensive explosion that was game 5.

Following a near heart attack from a missed Torey Craig lay-up, the Nuggets are here after an absolute slugfest of a game 7. Becoming just the 12th team in NBA history to come back from down 3-1, the Nuggets won’t be given the same chance should they fall into that hole again against a veteran Clippers team. They do have a bona fide superstar in Jamal Murray who averaged 31.3 PPG including 3 straight games of 40+. Not to mention All-Star Nikola Jokic who was the leading scorer in game 7 and hit the game-winner against 2-time DPOY Rudy Gobert. While the Nuggets seriously lacked on defense throughout the series, they showed they can hunker it down in game 7 and also were bolstered by Gary Harris’ return to the lineup (who should be the counter to Lou Williams).

The Clippers are well rested and the surefire favorites in this series. I am hopeful for the Nuggets because I really don’t see who is going to guard Nikola Jokic if Rudy Gobert can’t. It will be another long series but ultimately will hinge heavily on Paul George’s presence on both ends of the court and as an OKC fan, I know what it’s like when Paul George needs to play a whole series in the playoffs: It doesn’t happen.

Everyone is talking about Murray vs Mitchell (Rightfully so)… But Jokic in Game 7 just dropped:

On a DPOY…. Best Center in the league?
I think so pic.twitter.com/TUTs6CnLGw