You just can’t get rid of me. After another tough week, you guys might be looking to fade me. 2-2 on the Munoz v Edgar card, but we are back for more! I’m still up on the year but we all know it’s been a rough couple weeks. Let’s get back on the horse, maybe pick a couple of dogs this time around and make some more money.

Fighting is a very polarizing sport with a very wide fan base so I’m sure many UFC fans were extremely disappointed (but not surprised) to see Dana White’s comments at the RNC. The majority of fighters in the UFC are in a completely different tax bracket and come from a completely different walk of life than that of UFC President Dana White. Along with the countless international fighters that are signed by the promotion, the UFC, just like most professional sports leagues, share very different political viewpoints from top to bottom because of privilege. The head’s of the league and the players have widely differing views and that most likely will never change. It’s very difficult to separate the promotion with the promoter but that is exactly what we are going to do moving forward with these UFC picks.

Let’s take a look at the upcoming card with the fight odds: 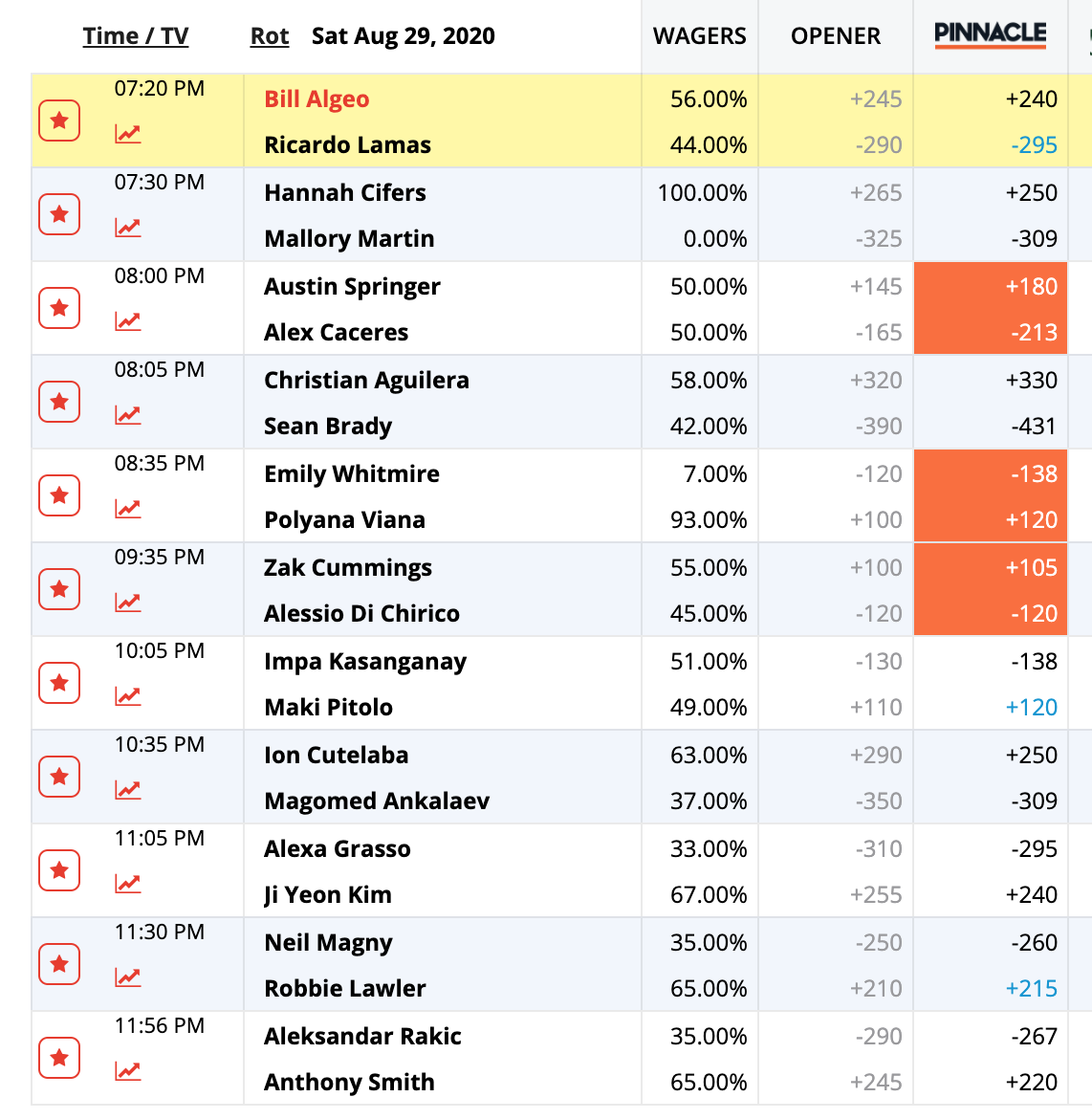 3 fights to get us back on track and hopefully, it will be 3 W’s.

Ion Cutelaba vs Magomed Ankalaev is a rematch that has been in the world for months now. In a fight that ended in an extremely controversial fashion, these two will get a chance to prove who truly is the better fighter. Ion Cutelaba, flat out got screwed in their last meeting and just based off of that alone and willing to take the number and ride with the Cerebral Ion Cutelaba.

Robbie Lawler as an underdog is truly a treat. Sure it’s been a while since we’ve seen him in the octagon, but for a guy of his caliber, it shouldn’t matter too much. Robbie is coming off of 3 straight losses. Two decision losses to Raphael Dos Anjos and Colby Covington in 5 round fights and a very controversial submission stoppage that we all remember against Ben Askren. Robbie is 38 and trying to get back on that horse one last time. Neil Magny is a workout warrior and an absolute beast but I think Lawler scratches and claws his way to a victory as a solid underdog.

Is Anthony Smith finally over the hill? We are basically betting on that. Rakic is the tough up and comer who’s on his way up while Smith is on his way down. The number isn’t too great but I just think we’ve seen Anthony Smith’s best days.

Little bonus pick, Ricardo Lamas (-290), the Head Coach of the UFC Gym located in Naperville, IL will have a tough matchup against short-notice opponent Bill Algeo, give me Bill Algeo (+245) will the big upset of the aging Lamas.