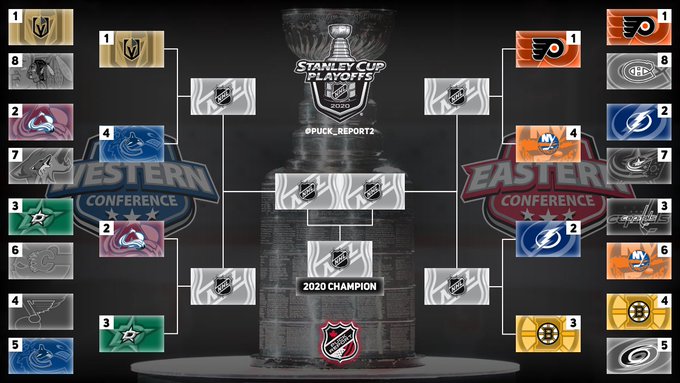 The bracket for Round 2 of the #StanleyCup Playoffs is set!
——#AnytimeAnywhere vs #Isles#BeTheThunder vs #NHLBruins
—#VegasBorn vs #GoCanucksGo#GoAvsGo vs #GoStars pic.twitter.com/DRWpfnlEa7

After having gone 4-4 in the last round (and inaccurately picking how many games for all the ones that I did get correct), I am back and ready for more with a bit more backing to how the series went for the teams included in my analysis.

The Flyers just had to spot the Canadiens two games to make me wrong but overall took care of business and continue to ride their hot streak towards the second round. It came down to the Flyers’ defense and goaltender to take care of business and that is exactly what they did. The Flyers actually had a negative goal differential in this series but were able to compensate with back-to-back shutout games on the heels of Carter Hart’s NHL playoff best .943 save percentage.  Hart is helped out with the Flyers only allowing 28 shots per game so far in the playoffs and stellar defense. The Flyers won this slugfest against a defense-first Canadiens and are looking at much of the same against the Islanders and will need to produce way more on offense if they are to win this series. We might see an uptick in Myers’ time on ice to slow down the Islanders’ potent offensive attack, and we need to see more goals from Couturier to open up the rest of the offense.

YOUR NEW YORK ISLANDERS ARE MOVING ON! ? ? ? pic.twitter.com/ivJ2GJn6Nl

The pupil did not yet surpass the master as the Islanders coached by former Capitals coach Barry Trotz got the best of his old team with a gentleman’s sweep of the 2018 cup champions. Most telling of the Islanders’ domination is the firing of the Capitals’ coach Todd Reirden. Semyon Varlamov is partying like it’s 2013 having only lost one game per series he’s played and post a .934 save percentage. He has been assisted by a suffocating Islanders defense that only has allowed 25.2 shots per game (2nd best in the playoffs). Combine this defense with an offense posting 3.33 goals per game and a top scorer in Anthony Beauvillier, you have a really balanced team that could beat you in a lot of different ways.

I loved the Flyers coming into the playoffs but after seeing them struggle against the Canadiens, I have a hard time thinking they’ll be able to handle a team that is so much more capable on offense in the Islanders. The Islanders play some of the best defense of anyone left, and play smart, opportunistic offense with some playmakers on that side of the puck. That will be enough to overwhelm the number one seed in the east.

The Lightning proved me wrong harder than nearly anyone else in the last round by dispatching the Blue Jackets via tough wins (including a 5-overtime game to start the series, and an OT game to end the series). The Lightning have showed resilience that seemed to be missing last year and have accomplished all without the help of Stamkos. Vasilevskly stepped up and has produced a .925 save percentage but the Lightning still yield a negative goal differential due to the absurd (32.6) shots per game. With Stamkos’ return still questionable, the Lightning will need Brayden Point to continue and lead this squad in points to have a run at this very disciplined Bruins team.

Despite Rask leaving after 2 games, the Bruins still found a way to win with Halak at the helm. The defense showed out for him though and helped the goalie out with only allowing 28 shots per game. The biggest advantage the Bruins have is their chemistry and experience and they continue to only get healthier as the postseason progresses (weird right?). The Bruins also have a good PK at 87.5 that should only grow with the Lightning’s poor power play.

The Bruins and Lightning are both catching their stride but with the Bruins sporting a healthier roster that will get better as the series goes on, I don’t see the Lightning outlasting the Bruins. Both teams also support good penalty kill but only one of them has a very poor power play and that’s the Lightning.

One of many gentleman’s sweeps from the first round was via the Golden Knights and their squeaking past the Blackhawks. The Knights continued to do what they do best and that’s score a ton of goals. They are still leading in the Stanley Cup Playoffs in averaging 3.89 goals per game. This pairs nicely with a mediocre Canucks nets and defense that allows nearly as many shots per game as the Blackhawks do (and that worked out for Vegas just fine). Alec Martninez has been huge on the ice for Vegas with a +10 and 5 points while playing over 20 minutes a game. He’s excellent at leading that puck-possessing attack in Vegas. Between him and Shea, the Knights hold onto the puck and limit the number of shots that Fleury and Lehner have had to face this postseason and should continue this success against a top-heavy Canucks attack.

The Chicago Blackhawks have been eliminated from the 2020 Stanley Cup Playoffs in 5 games at the hands of the Vegas Golden Knights. pic.twitter.com/8thmF8g7a4

No repeat this year and we have the Canucks to thank for that. Elias Pettersson has caught fire in the playoffs with 13 points through 11 games and is a huge reason the Canucks have 34 goals in the playoffs which is good for 2nd best in the playoffs. The Canucks will have to continue to see success from Pettersson and J.T. Miller at the faceoffs if they don’t want the Knights to hold onto the puck forever. Markstrom has played the most minutes of any goalie in the NHL playoffs, and that won’t stop here as he will have to be at his absolute best to combat the Knights’ barrage of shots.

The Golden Knights are the best in the west for a reason and I think that their shot output and depth against Markstrom’s high minutes and the Canucks’ pushover defense is a combination that will put the final nail in the Canucks’ coffin this season. Not to say that Vancouver won’t steal one.

? DeBoer: We're here for one thing and that's to pursue a Stanley Cup. There's no doubt in my mind that everyone in that room is invested in that. pic.twitter.com/rTd12YoCLd

The Colorado hockey team lived up to their namesake with an avalanche of 14 goals through the last 2 games of their series against the Coyotes in their gentleman’s sweep. Through the whole series the Avs scored 22 goals that contributed to their 34 goals so far in the postseason and 3.78 per game (both good for second best amongst all teams). Spearheading this scoring rampage is Hart trophy finalist Nathan MacKinnon who is leading all players with 16 points thus far in the playoffs and is leading amongst all players still in the playoffs in points per game. In addition to MacKinnon’s MVP play, Cale Makar has also been a beast on both sides of the puck with a plus/minus of +10. There are so many players to reference in addition to these two with the likes of Kadri tied for the lead in playoff goals but probably most important is that the Avs score on nearly 30% of their power plays and scored 11 goals in power play instances.

After a pretty dismal start in the round robin, and falling 2-1 to the Flames, the Stars seemed to have regained their pre-pandemic form and are ready to push the Avs. The Stars are no pushovers on the offensive side of the puck with 30 goals to their name. Just like the Avs, the Stars have 2 players with 6 goals in the postseason with Denis Gurianov and Joe Pavelski, and also Alexander Radulov with another 4. The Stars are pretty top heavy with their goal scoring but also amongst the best. They will have to cleanup their penalty kills though if they are to stand a chance with their penalty kill being amongst the worst in the playoffs at 77%.

The Avalanche were way better than the Coyotes team they drew in the first round, but many were worried due to the styles of play being so different. They overcame that and will have a hard time adjusting to a way better team, but I believe that this rested, healthy Avs team is just deeper than the Stars and will ride an MVP-candidate in MacKinnon to the WCF.