It’s no secret that I’ve gone a little cold recently so we are changing up the format and only giving a couple of quick picks this time around. Let’s take a look at the full fight card odds. 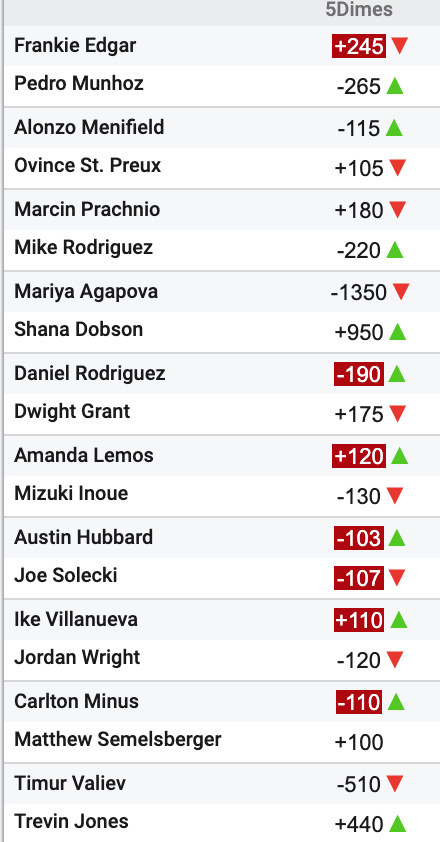 The Munhoz/Edgar card has gone through a lot of last-minute changes. So, some good odds on fights are now off of the table because of a couple of matchup switches. Daniel Rodriguez, who was going to be a great pick, is now fighting Dwight Grant after both of their opponents dropped out last minute. The odds have been set, hopefully, it should be a good fight.

We also have the excitement of watching Mariya Agapova fight tonight, but her odds are so ridiculous that they aren’t even worth it as she’s a -1350 favorite. Her opponent Shana Dobson comes in as a +950 dog as well.

We are here to get some more value than that. So let’s get to our 3 picks for the night.

Hubbard has just been a fighter I’ve liked since his debut. He took Mark Madsen to a decision despite being way overmatched. The dude is just tough and he’s going to win the fights he’s supposed to. Look for him to get another win on a quick 2-month turnaround.

Daniel Rodriguez presumably had better odds against Goto, his original matchup so if you can get on this number quick I would do it. This guy is such an exciting fighter. He finishes fights wherever he can and he’s tough as shit. He’s going to send a message with a quick victory.

Sure Frankie Edgar was once a top name in the UFC, he’s now making his debut down at Bantamweight which is two weight classes down from what we’ve usually seen him at. Most times you see guys go up a weight class at the end of their career but not with guys like Edgar and Aldo who are both still trying to chase two division titles. Edgar is out of juice and Munhoz is the better fighter, I think it could be a quick one.

Make sure to follow along on Twitter @SONTChicago for all of your Chicago sports and MMA needs!