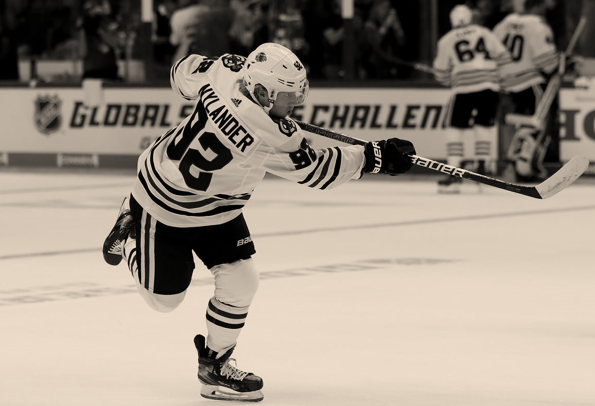 The palpable buzz after a 6-4 victory in Game 1 in the qualifying round against Edmonton is gone after a concerning defensive performance that was accompanied by a lot of positional and puck-handling sloppiness in Game 2. Led by Connor McDavid’s first career playoff hat trick and puck donations from Corey Crawford, Ryan Carpenter, and Alex Nylander, it was the Oilers’ turn to put up half a dozen on the scoresheet.

Crawford was completely hung out to dry by his defense. Well, except for the fifth goal when he put it on a silver platter for James Neal. Adam Boqvist looked exactly like a 19-year-old in his first ever postseason action, especially on the first goal – which came 19 seconds into the game. Boqvist cheated on the completely other end of the ice, and a loose puck found the best player in the world uncontested in front of Crawford for his first of three. A few minutes later, Olli Maatta, known for not being so fleet of foot on the blueline, got beat from the neutral zone and in by McDavid who also showed off an excellent backhand that he sent to the roof of the net.

The third goal is where we begin to focus on lineup changes. Nylander failed to handle a simple outlet pass in the neutral zone. Unfortunately for him too, a shot went off his stick and redirected past Crawford for the third goal. That was a microcosm of Nylander’s season (and young career). He hasn’t made smart plays and has been soft on the puck all season.

Drake Caggiula’s suspension also loomed large. He’s one of few Blackhawks that plays with sandpaper, and he can contribute offensively on the third line. John Quenneville hardly played, and Nylander was brutal. His return will be much welcomed in Game 3.

I also thought Dylan Strome had a poor game, and he and Boqvist could not remove James Neal of the puck after Crawford’s gaffe for the sixth goal. I thought overall Kirby Dach had a strong game, but fresh off tying the game at three, you can’t take a neutral zone penalty against the best NHL power play of the last four decades. They’re damn near automatic. When you come back from a 3-1 deficit to tie, you can’t take a bad penalty in a non-danger area. Carpenter had a terrible clearing effort on the backhand which led to McDavid’s centering pass double-deflecting off Hawks into the net, but to be 4-on-5 in that scenario was tough.

Overall, here’s what I’d do: