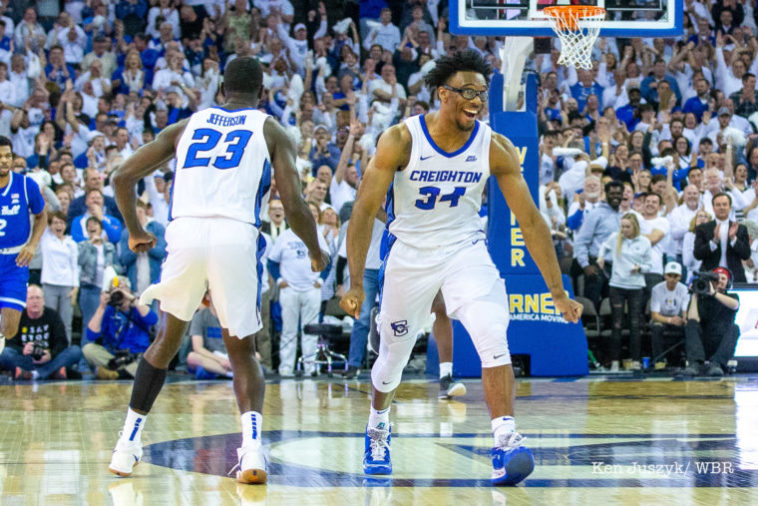 The closer we got to the August 3rd NBA Draft withdrawal date, the more nervous I got that Damien Jefferson & Denzel Mahoney had played their last games in a Creighton uniform. Neither player had much of a chance of being drafted, but I was worried that due to the uncertainty surrounding college athletics this upcoming semester that both players would choose to begin their professional careers a year early. As it turns out, my concerns were unfounded.

Creighton coach Greg McDermott announced yesterday on twitter that the tandem would be returning to Omaha, following up a couple of mysterious tweets from Mahoney and Jefferson themselves.

Time to finish what we started. Looking forward to having these two back in a Creighton uniform for one more season! #RDJ pic.twitter.com/4LSXH48rjf

I’d never been so excited about college basketball on a Saturday afternoon in August.

Notice the time stamp. Coach Mac sent his tweet quite some time after Denzel shared this.  Even though the the gif shows Mahoney and Jefferson high-fiving, only the Big East’s reigning Sixth Man of the Year knew the tweet’s true meaning for what had to have been an excruciating 41 minutes for the Creighton faithful who suddenly found themselves trying to make sense of it all.

Not three minutes later, Damien Jefferson added kindling to the speculative fire with one of the more powerful single characters on a smartphone’s keyboard: the eyeballs emoji.

Something tells me these guys knew exactly what they were doing and simply wanted to have some fun with their announcements. I don’t blame them one bit for doing so, I’m just glad I wasn’t following along in real time.

So what does this great news mean for the Jays? It lessens the blow of Ty-Shon Alexander’s decision to forego his senior campaign and means that next year’s Bluejays team will return six of its top eight leading scorers. That’s not too shabby for a squad who reeled off arguably their most impressive regular season in school history en route to a Big East regular season co-championship and a #7 ranking in the final AP poll.

Yes, Alexander’s departure leaves a gaping void on a team that might’ve been a Final Four contender had he decided to stay, but Jays fans are no less thankful to know that two of the most athletic wings in the conference will be causing match-up nightmares for opponents no matter what the 2020-2021 college basketball season looks like.

Creighton has finished above where predicted in the Big East preseason coaches poll every season since joining the conference in 2013. Most notable is this past season, where the Jays were selected to finish seventh and went on to claim a share of the regular season title. Creighton won’t have this element of surprise in their back pocket this season – they’re certain to be slated firmly in the top 25 to begin the year.

It’s no longer a question as to whether Coach McDermott will get the most out of whoever he trots out on the floor. Damien Jefferson and Denzel Mahoney remaining in the fold is phenomenal news for the Bluejays.

Here’s to hoping we get a full season of college basketball this year!