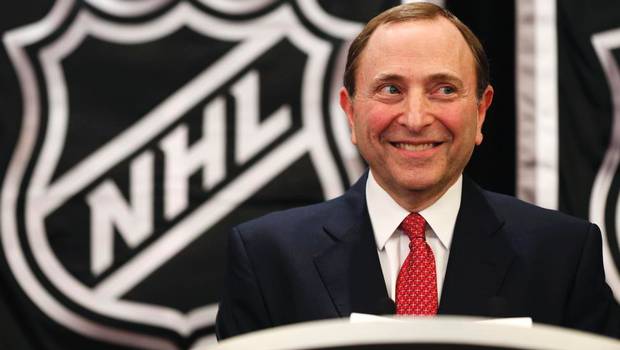 I’ve long thought that despite all of his shortcomings in promoting the sport, Gary Bettman is a pretty damn good commissioner. I’m going to get out in front and say that the last lockout in 2013 and him not signing off on NHL players playing in the last Winter Olympics were objectively very bad looks and completely contradict the first sentence of this blog, but in my opinion he has done more good than bad. But that’s not the point of this blog.

Anyways, I think this is just one of those things that Bettman has done to become more like-able, if only marginally so. I mean let’s be honest here, Gary Bettman is a giant dork and has the personality of a sponge, but at least he tries so I want to give credit when it’s due.

For as long as I can remember, Bettman has embraced the boos and accepted the fact that booing the commissioner is among the most patriotic things that one can do. Just because there is no crowd there does not mean the commissioner is off the hook from verbal humiliation. That’s integrity that you just don’t see anymore Cc: Adam Silver.

I also think there is some small part of this that is for the players. This year a number of players are going to hoist the Stanley Cup for the first and probably only time in their career. It is the absolute pinnacle of the sport and what these guys work their entire lives for. You dream of hoisting the cup in front of thousands of fans and embracing that moment with your teammates. This year is obviously unlike any other (just crossed my mind that the cup winners probably can’t drop $250k at the bar this year postgame. Imagine?!). I can’t really begin to guess what that scene will look like during the cup presentation because theres still probably more modifications like this to be made. But I guess in a way it brings a bit more normalcy to an unprecedented SCF, so good on Bettman.