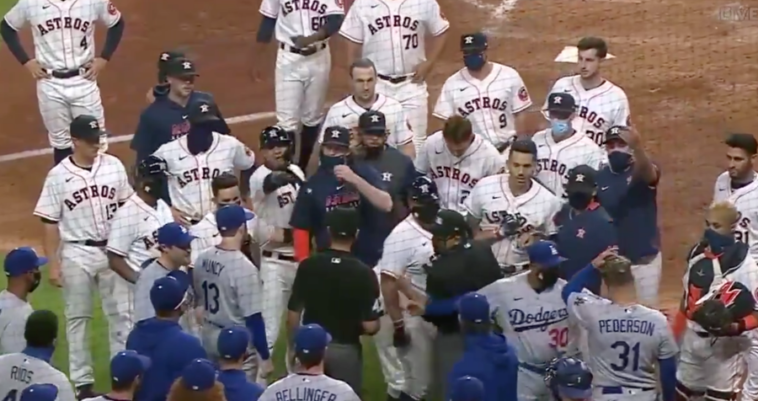 After an opening 4 game series where my Seattle Mariners did not throw once at the Houston Astros after an off-season where the Astros were caught (allegedly but they did it) cheating. The Los Angeles Dodgers went after revenge in their first game against the Astros. It started with Joe Kelly throwing at Alex Bregman:

Then followed by some trash talk by Astros Michael Brantley yelling at Joe Kelly:

"Get on the mound, motherfucker." pic.twitter.com/1UrW4sYwua

Then Joe Kelly of course threw at cheater Carlos Correa:

Carlos Correa has to duck out of the way from an inside breaking ball from Joe Kelly. pic.twitter.com/NabNOVB0Q6

Which resulted in Joe Kelly striking out Carlos Correa and sticking his tongue out:

Then of course were words were exchanged and the benches cleared:

And then Fox went to a hard break and nothing happened since we are in the midst of a global pandemic and you have to basically be socially distant. But mad respect to Joe Kelly for going after the Astros. At the end of the day the biggest travesty of this baseball season is that the Astros won’t be in front of fans and getting boo’ed. But thankfully Joe Kelly gave us what we wanted today and I expect this to continue for the Astros the rest of the season. Expect when they play my Mariners who don’t seem to have any guts to throw at Houston.