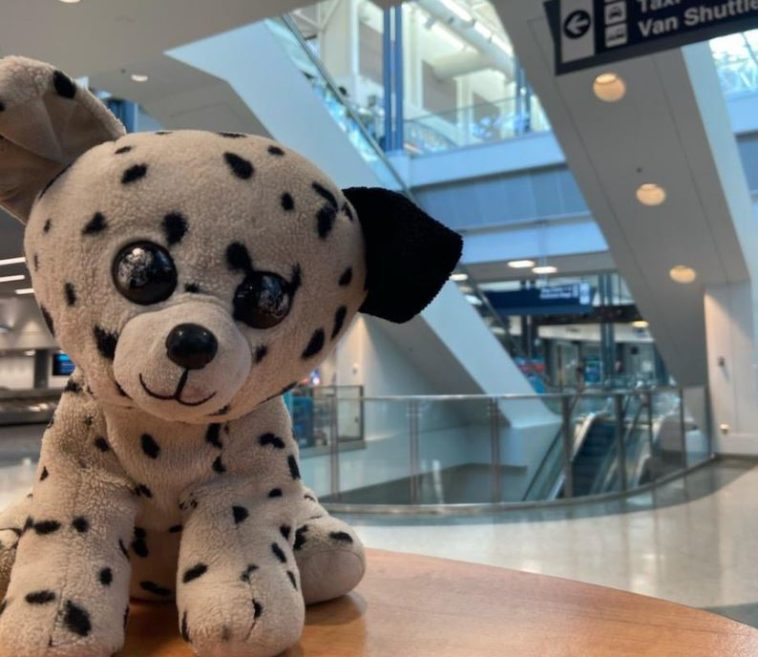 Sometimes here at Sports On Tap we take a quick step away from sports when we find a story that makes us just feel good. And lately the world hasn’t felt that damn good to be frank. But came across this on story on Twitter and it’s the best damn thing I’ve seen all week. It all started when the CVG airport put out this tweet (Cincinnati/ Northern Kentucky Airport):

We think this guy missed his flight at CVG this morning! We found him hanging out by Starbucks outside of our security checkpoint.

In general if there is a place where you are likely to lose some personal belongs it’s the airport. It has to be in the top three or four places where you could leave something behind. You’re running late, you’re rushing, going through security, moving around a ton, just a recipe for losing things. But what makes this story so great is the extra effort the airport’s social media department went to get this stuffed animal home.

Our friend had a busy day,getting to go out on the airfield/runway & going on plane engine inspections.

Seriously the cool thing here is they took the time going spot to spot taking pictures and even giving him a mask. Why? Well for one, to get him back to the kid. But also, I could imagine the airport isn’t that busy during COVID times. But nonetheless an A+ for effort. But not only was there effort. They got the result they wanted.

Jet ("Masch Masch"), is home! 6-year-old Jaydence received Masch Masch from the judge who finalized his adoption 2 years ago. Jaydence is pictured here w the rest of his family (2 brothers w their own, stuffed “adoption bday” gifts).

Doug and Phyllis Ronco, of Madeira Beach, Florida, said they were driving to the St. Pete-Clearwater International Airport to retrieve their son’s stuffed animal Friday.

“I think our son was half a sleep when he left Masch-Masch (the dog’s nickname) at the terminal,” Ronco said. “Under normal circumstances, he would never forget him… it’s very special to him.”

Thank you SO much to our followers, who helped spread the word. & bigger thanks to our friends at @Allegiant & @flytopie, who went out of their way to help.

During these times of staying apart, we came together to make this happen. ? ?? #CVGnext ?? #airporttwitter

Just amazing. Look it’s been a rough year and a rough day for sports news today so when I saw this story I immediately wanted to blog about it and I got to admit it made me feel good for once today.