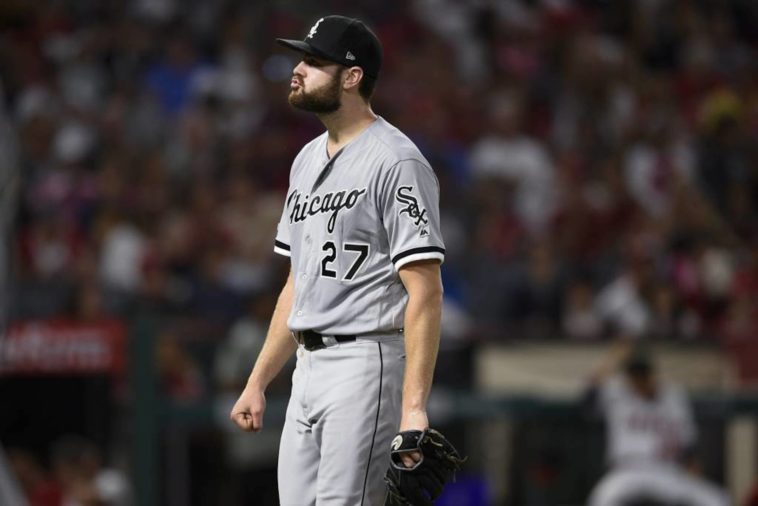 I can’t remember an Opening Day for the White Sox (or baseball, for that matter) with this much anticipation.  After a 2019 that saw the emergence of Lucas Giolito and Yoan Moncada as bona fide stars, Tim Anderson winning a batting title, and Eloy Jimenez showing his hitting prowess, the fast and furious offseason Rick Hahn put on only boosted expectations.

Great thought from Hahn, who says the offseason buzz is "outstanding", but that #WhiteSox haven't won anything yet. Says the goal is a parade down Michigan Ave. after winning the World Series — "Talk to me after the parade".

With Jose Abreu back and veterans like Yasmani Grandal, Dallas Keuchel, and Edwin Encarnacion added to the mix and Luis Robert finally ascending to the big leagues, the White Sox were overflowing with hope and expectations.  Even on the national stage, the White Sox were starting to get noticed.  This was something we hadn’t seen in several years, since the rebuild began.

After running over the Cubs to open the exhibition season armed with an array of offensive weapons up and down the lineup, that confidence only grew.  Opening Day was supposed to be a coronation of sorts, a celebration of the emergence of the new White Sox dynasty.

A test against the reigning AL Central champion Minnesota Twins only made that more apparent.  A chance to make a statement right away, and proclaim to the league that the South Side is back.

And then they lost.  Whoops.

That first pitch to Max Kepler was about the worst omen the White Sox could get to start the season, as they were quickly reminded which team set the MLB record in home runs last year.

Look, I’m not going to overreact to just one game in even a shortened 60 game season.  Yes, each game carries more weight, but it still is just one single game.  Still, it’s impossible to not be disappointed with the 2020 season opener after an extended offseason filled with hype.

Trying to keep a realistic tone in mind, here are some of my main thoughts from last night’s season opener.

The Core Guys Hit the Cover off the Ball

So obviously, this is a good one.  Some of the major questions the White Sox had going into the season were answered last night, those being how quickly Yoan Moncada could ramp up, could Eloy Jimenez build on his strong end to 2019, and how fast would Luis Robert acclimate to Major League pitching.

Well, all of those questions had positive answers last night.

Moncada silenced the doubts early, with a double in the first inning and a game-tying, iconic bat drop home run to left in the second.

Jimenez and Robert got that second inning going earlier, with back to back singles to open the frame.  This included Robert’s first MLB hit in his first MLB at bat, a 115.8 mph missile that found its way through the infield.

Robert then just missed his first career homer in the 8th with a double off the wall in right center.

When it was all said and done, the offensive production for the Sox had a very distinct breakdown:

While I’m not worried about the first three on that veteran list (yet), there will be more on Delmonico and Garcia later.  The important takeaway is the key guys produced.

Depth is Going to Be the Limiting Factor

Well, later came soon.  If it wasn’t clear from the roster itself, Opening Day made it abundantly clear: depth is going to be the biggest thing that can hold the White Sox back in 2020.  While the White Sox were trotting out Nicky Delmonico and Leury Garcia in the 8th and 9th slots, the Twins were batting Miguel Sano and Luis Arraez in those same slots.

If that doesn’t show the difference in those two rosters, I don’t know what does.

There’s a reason the Twins won 101 games last season, even if multiple players had a career year.  They run nine deep with nine solid or better major league players.  Last night, the White Sox didn’t do that.

Of course, the reason for this lineup was clear: Delmonico was in right because Nomar Mazara landed on the IL, and Leury Garcia was at second because Nick Madrigal was sent to Schaumburg for…reasons?  But still, that’s the point here – in a season being played during a pandemic, depth is going to be crucial, even in only 60 games.

Garcia is a fine option as a super-utility guy that can cover almost every position on the field.  In the 2020 season, that will be key.  But it still stood out that the best second basemen in the organization was sitting on his couch so he could be in Chicago for cheap in 2026 while Garcia butchered ball after ball at second. This runs antithetical to an “every game counts” mantra in 2020.

Delmonico, again, as a lower end depth piece is fine, especially if he can get the bat to start looking more like 2017.  Starting right fielder on Opening Day?  Not so much.

This isn’t to say the Sox can’t win in 2020, but they are going to need to get everything they can out of their starters.

I don’t want to overreact about Giolito’s night, but it was a hard pill to swallow on Opening Day.  Even in his dominant 2019 season, he had some rough outings, but the body of work was impressive when it was all said and done.  The same went for Aaron Bummer, who also struggled on Friday night.

The bright spot on the mound, without a doubt, was Cody Heuer’s MLB debut, continuing his hot Summer Camp into the season.

A strikeout and a perfect inning in Codi Heuer's MLB debut! pic.twitter.com/2kUbjG2jVQ

The pitching staff as a whole, as Friday seemed to indicate, will need some time to go to ramp up and shake all the rust off.  While Jace Fry, Ross Detwilier, and Cody Heuer were bright spots, the guys you didn’t think you had to worry about as much (Giolito, Cordero, Bummer, and Marshall) all had their struggles.  Burning through a bullpen like that on Opening Day is never ideal.

I don’t want to panic about pitching after one game, but it’s clear that offenses are going to strike first in this season.  In that case, it’s good the White Sox have the offense they do.

I mentioned in my recap of the exhibition opener, but it was a refreshing sight to see an offense that could fight it’s way back in games, to overcome volumes of deficits they didn’t have the firepower to cross in years past.  This year is clearly a different story, as the Sox clawed back from a 5-1 deficit to make it 5-5 after 2.

Yes, the rest of the game went poorly, but in a season where there will be some games where the pitching gets hit, it is reassuring to know the offense can keep you alive.  Ricky’s boys not quitting will be the most true it’s ever been this season.

This blog served as an exorcism of Opening Day in my mind.  On to day two.

In this expanded playoffs 59-1 still gets in. On to Keuchel Day